Hidden 3 mos ago Post by The Irish Tree
Raw —
coGM 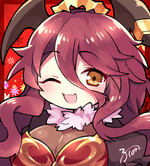 5285 posts
in 2879 days
Seen 5 hrs ago
Bio
With their lizard friend's leg safe from imminent digestion, Steppe Archer would pump her fists in the air excitedly, just in time with her druidic friend's smashing of the ugly pile of poo-scented pudding. "Nice! The ice really did work!" she exclaimed, glad to see that in spite of getting a little bit of his scales injured, Big Red was as tough as ever. She was sure that she'd at least be crying if that was her skin...but like he said, scales were tougher.

"Just don't go kicking vaguely liquid monsters again," the archer would say, tilting her head as she noticed the faintest glimmer from where the slime had once been frozen. It was...a ring of some kind. Tarnished copper with a small green gem inlaid upon it. "Huh. This might be what made that slime..." she said aloud, putting it in a pouch before adding: "Personally, I think we should get him out of here right away and wash that burn wound. Who knows what kinds of things that slime ate? Aside from maybe that ring."
Hidden 2 mos ago Post by Kazemitsu
Raw —

1232 posts
in 1640 days
Seen 2 days ago
Big Red watched the pairs reaction to him starting to be eaten...and then Druid Girl finally used her spell. The cold made him shiver but the slime thickened and dropped off. Rapidly cooling liquid thickened up it seemed. It didn't get that cold where he was from, he had never seen ice or snow...or even breath mist. The blob though was slowly starting to move away, clearly trying to escape the cold source.

Druid Girl prevented the slow escape by splattering the slime with her staff. Which revealed a ring within its stomach. "I doubt the ring made it, slimes are a fairly common creature when it comes to caves and swamps. Which a sewer is like a mixture of both." He stated before shrugging. "Then again magic is strange and can do many things." The big reptilian man continued before the girls started to worry about his leg.

He gave the pair a dull look before patting his own chest. "Swamp-dweller. Disease doesn't affect me nearly as much as one of you. We'll continue on." He rumbled, did humans really worry about their combatants this much or were these two just the odd ladies out? Either way his pant leg was dropped and he made it obvious he wanted to keep going. It was a minor injury really and he felt like there was no point worrying so much about it.
Hidden 2 mos ago Post by Xaltwind
Raw —
GM

1307 posts
in 2879 days
Seen 3 hrs ago
Bio 3 days ago
Druid Girl nodded in agreement when Steppe Archer brought up the proposal to head back. Even if the injury to Big Red's leg didn't look or seem that bad, it could still get infected... But, the big lizard brawler seemed to think otherwise, and promptly stated that he was right as rain... He didn't seem like the type to grit his teeth and act macho, nor did he seem the type to try and impress and flaunt his masculinity... Mostly because of how mind-numbingly pragmatic the fellow seemed to be. So, Druid Girl would just accept that if the large swamp-warrior said he was alright, then he probably was alright.

She was about to go on to speak, when she noticed Steppe Archer walking over to the slushy remains of their defeated opponent, bend down and pick something up. Red flags and sirens buzzed all trhough Druid Girl's mind, and she quickly paced over to her ally, grabbing hold of the other girl's wrist and inspecting her hands and fingers. Once she was sure the little lioness wasn't having her skin melted off by residual slime, she gave the archer a stern but concerned look.

"You dummy! What if the remaining slime-goop were to burn you like how it did with Big Red? You need to be more careful, alright?" It was a scolding, but judging from the tone of her voice, the look on her face and how she seemed genuinely relieved that nothing bad had happened, it was clear to see that she was far more worried about her compatriot's well-being rather than being angry at her carelessness.

Now they were at an impass though. Steppe ARcher had suggested going back, but Big Red wanted to press on and keep going. Both decisions carried value. If they left, they could make sure Big Red was safe and unharmed, but they wouldn't get paid for the quest and would've wasted a lot of time and money on something that yielded no return. On the other hand, if they stayed and pressed on, they could probably finish the quest quick enough - if there were no more surprises at least - and get their reward, with the possibility of Big Red getting an infection or something even nastier... After all, while a sewer might be as damp and smelly as a swamp, the two were still fundamentally different. One contained stagnant water and putrifying vegetation, the other contained feces, amonia, humanoid waste and various types of mold and animal droppings...

"If you're sure that you're alright, big guy, I think it's best if we just finish up this quest real fast and then head back up." Druid Girl fianlly said, gently scratching her cheek with an index-figner. "Still, it's weird." She added. "That... gooey slime thing... I've never seen any of those before, in all the times I've been down here... And it didn't seem shy about advancing on enemies even when outnumbered, so I doubt they'd be smart enough to keep hidden all this time..." She thought aloud, now giving her chin a slight rub. "Maybe... Maybe it got in through one of the sewer grates outside of town? Or... Maybe somebody flushed it down here? Well, whatever, I just hope there aren't anymor eof those... Things... around." She finished, before coming to a realization.

"Y'know... if we hadn't killed that thing, it might've become the apex predator of the sewers. Think about it. The rats and bugs down here wouldn't be able to even hurt it. Hah... I guess we saved the natural order of the sewers." She ended off her thoughts, with a slight laugh. "Well, what should we do then? Head back and pick another tunnel, or keep pushing on in this one? Though, given the lack of critters, I'm not sure we'll find more if we keep moving on in this area." Her last comment was based on the fact that there hadn't been anything up until the slime in this particular sewer tunnel.

For now, in the warm glow of the torch, the nature mage would wait for what her allies wanted to do.
Hidden 2 mos ago Post by The Irish Tree
Raw —
coGM

5285 posts
in 2879 days
Seen 5 hrs ago
Bio
Steppe Archer had to agree...kicking that thing had been a huge mistake. But at least Big Red wasn't all that hurt. And, as he said, stuff wouldn't seep past his scales and cause an infection. "I agree on finishing this up quickly. I wonder if that thing ate all the rats and roaches itself or not. That'd be convenient for us," she said aloud while trying to peek down some of the corridors. "I've never seen anything like that either."

"I think we should head back. Something like that, that seemed to move on instinct alone, it probably ate just about everything in these tunnels and got that big. As nice as it'd be to call it a day claiming its kills, we don't have any proof that anything on the quest died. If you want, I could scout ahead on the next tunnel, and run back if there's any trouble." Steppe Archer was all for continuing since their Lizard Fighter claimed to be good to go, even in poopoo water. She was a bit worried that there might be more of those things, but as long as they kept an eye and ear out, they'd be able to run if things got tough.
↑ Top