Down and looking for partner to have some fun 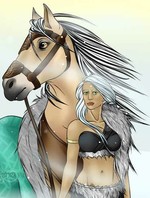 87 posts
in 3129 days
Seen 4 hrs ago
Bio
Thank you for stopping in and checking out my ideas and plots. -Bows gratefully-

I go by Kilin it's an old nickname I was given and happens to also be the first character I ever made. She's an amazing character that if you are interested in I would be happy to fill you in on something I have in mind for her just let me know.

I am not the best in my grammar but I am trying really hard to get better with it. I usually make sure my post is at least spell checked and minor things fixed. So if you think you can deal with that and are willing to give me a shot then let us continue on. Now on to the ones I have up, and what I am looking for in a partner.

My story is about two feuding families the McReiver's and (my partners choice), the lordly families have been at each other for generations over land, Though the real reason for the feud has been long lost it has been war after war until the king told them both that an end must come to the feuding. The families bitterly did as told but the feuding never stopped. the Mc'Reiver family was one with strong boys and men the wife of lord Dominic Mc'Reiver was a strong woman though had fallen ill in the last pregnancy which the lord feared for so far he had been blessed with nothing but boys. but that night as the mother passed away the cries of the 5th Mc'Reiver baby were heard. It was a girl beautiful with dark black hair and green eyes just like her mother, but in fear the king would make the family use her to end the feuding once and for all or that the __________ family would try and use that as well, it was decided that the baby, disguised as a boy. So it was announced the 5th son of Dominic had been born and only the family and a few well-trusted servants were entrusted with the truth. Raised as a boy the king spared nothing on his youngest if anything he pushed her harder to keep the secret and kept her hidden from most still to be safe.

New life.
This story is about a girl that is pulled back to a world that her grandmother had run from. A land filled with magic and more and a prophecy

My character finds herself falling through a portal of some kind and waking in a new world that is nothing like the earth that she left behind at all.

These are the main ones I'm wanting to talk about and try and figure out with a partner. If interested please hit me up.

your character is a ( ) fighting for his freedom in an underground arena below a dystopian city. his last “manager” died when a fight went wrong. “Managers” are humans, either criminal, runaways, or something else, charged with taking care of their fighter and keeping them out of trouble which is easier said than done. There are rules one must follow. The more one wins the more they make. Thirteen fight wins guarantees freedom as long as both survive. my character has been chosen as his new manager. How will they cope with finding out supernaturals exist and how do they get their freedom?
↑ Top
© 2007-2017
BBCode Cheatsheet