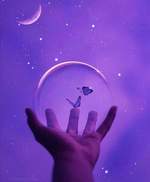 Strengths: Has a good listening ear. Quite a strong empath. One of the best friends a person could ask for.
Weaknesses: A little to trusting. Doesn't have much of a penchant for seperating the good people from the bad people. However. she can also hold quite the grudge and may harbor a bit of a temper once she's been crossed.
Background/History: Shayla grew up in the system, but hasn't let that stop her. She was born to Diane and Allen Webster. Father abandoned her when she was little, and when she was about three years old, her mother died. Her grandparents took her in until she was about 5 years old, but then they passed away as well. So, she was put into a group home with a number of other kids. It wasn't the most ideal but she did alright. The kids were mostly friendly, that is until she was adopted. The new family wasn't the nicest. Violet and Damien had wanted a child for a while, and they couldn't conceive. They wanted the baby, but they couldn't seem to find one so they settled for Shayla was now 7 years old. She was a little old for them, but they figured it couldn't harm. But once she got to their home, they didn't want her anymore. Of course, since they put in for adoption, she was now theirs. Shay;a didn't think anything of it, but eventually, the days started getting worse. Once she hit 10 years old, they began to only feed her bread, cheese and water. To stop her from "getting to big", was what they told her.
It started to get worse from there. They stopped buying her new clothes, or giving her baths. They stopped sending her to school, but she was smart. She taught herself math, reading, all the like. She was only able to do it while they were asleep, or out of the house. Same with finding anything else to eat, even though they kept a lock on the cupboards and friedge.
By the time she was 14, she planned a way to escape. She only weighted 75 pounds at that time, and was extremely underdeveloped. But one night, she slipped away, having managed to stockpile food into a small knapsack. She ran off into the night, and then was found in the park the next day by a police officer. He was a young man, and he knew the girl needed help, so he took her back to his place. He didn't tell anyone about her. Violet and Damien never filed a missing persons or anything and so Shayla was left, forgotten, except to the police officer. He fed her, bought her new clothes and got her back into school just before she turned 15. With this new help, and a good doctor check up, she began to develop normally. By 17 years old, she was at healthy weight, and smart as a whip. The police officer began to fall for her, despite being nearly a decade older. Shayla began to realize this when she caught the officer checking her out one night after a shower. Thankfully, she was about 18 at the time and managed to escape where she then ran off and made it to New York City. A freshly made adult, no money to her name, things could have gone terribly.
But there, she found a bit of luck. She managed to get a job as a waitress, got enough money for her first apartment and began to live the dream. Not that she had much of one, besides being a writer. By the time she was 20, she had her first small book published. She got a new, nicer apartment. By 23, she got another book published. And now, here we are at 24 years old. Living on her own, with a pair of new kittens and the desire to start really living.

Personality: Friendly, easy going. Loves to read and write. Loves to visit and volunteer at the animal shelter. Also loves music of all kinds. She's sweet, kind, caring and loves her friends deeply.

Appearance: She is 5'4" tall. She has long, raven black hair, deep blue eyes and a lithe body. She loves long, loose flowing skirts and tight tank tops or sweaters. Her favorite shoes consist of being a black knee or ankle high. Jewlery is long earrings, a couple simple, delicate bands on her two index fingers and right ring finger. Chokers. No bracelets.
amazon.com/Riverdale-Camila-Mendes-Ve…
images.app.goo.gl/dJjiNqQBJKRphbT17
images.app.goo.gl/NZ65QjpnH4e6cEWRA

Powers/Magic/Abilities An empath. Very intuitive and can easily tell when she is being lied to.
Pets: A pair of kitten siblings. One is solid black except for a white tuft on her chest. Her eyes are a beautiful green with gold outline. Her name is Myrcella. The other is a solid white boy with piercing blue eyes. He is deaf but you'd never be able to tell with how he acts. His name is Moonstar.
Hidden 7 days ago Post by TaliaSilvers
Raw —
OP