This RP takes place in a world where humans coexist with anthropomorphic species, although actual intermixing is relatively rare due to specifics of climate, diet, and species-specific restrictions on where each race can comfortably live make settlements with large minorities of other species a rare thing. Humans are the most adaptable of all the species on this world, as well as the most advanced, although not to an enormous degree.

Politically, the world is fragmented into many small countries and city-states. Exactly why this is so isn't important, as the setting is basically a starting point more than a fully-realized world, no more than an arena for the characters. More important is the city-state of Ephesus, where the action largely takes place. It is a large human city; the largest city in the world in fact- with a sizable population of dragons living in a neighborhood called- you guessed it, Dragontown. Other minorities exist as well, but only the dragons have the numbers needed to sustain their own society within the larger human culture of Ephesus.

Our characters would be a human man and a female dragon, both adults; I'd like to play a human man as my main character, but we can play any number of side characters of either species. They'd be in a relationship, but not from the get-go; they have to meet first.

We can work on the specifics of each culture, but as a starter, here are a few bullet points:

- The titular species are commonly referred to as "dragons", and while they call themselves that too, it's only due to adapting the name from the outside world. Biologically, they are at an intermediate point between what we'd all reptiles and mammals, and have traits of both. Despite their draconic appearance, they have hair, the females can nurse their young, and have skin much more like a dolphin's than that of a crocodile or a lizard.

- The dragons come from a tropical island archipelago to the south of Ephesus, in the middle of an ocean. Ephesus itself is also tropical, but barely so, or it might even be technically classed as subtropical. Think of it like Miami and the dragon islands as Indonesia if that helps to picture the climate.

- The Ephesian humans are advanced, democratic, and reasonably tolerant, although they don't particularly like the noisier and louder cultures which contrast with their more straightforward and stoic way of living. They worship one God, but we don't need to go into much detail about the theology.

- Dragon culture is colorful, spicy, polytheistic, and while it can be very fun, their society doesn't value thrift and hard work the same way the Ephesian humans do. Not that the dragons are lazy per se. They dress much like humans today would, apart from footwear, which they almost never use due to their claws and cultural reasons.

Also, the dragons look something like this (perhaps without the vestigial wings) and are about human-sized, with hair, a tail, fangs, horns, and claws, as well as visible outer ears: 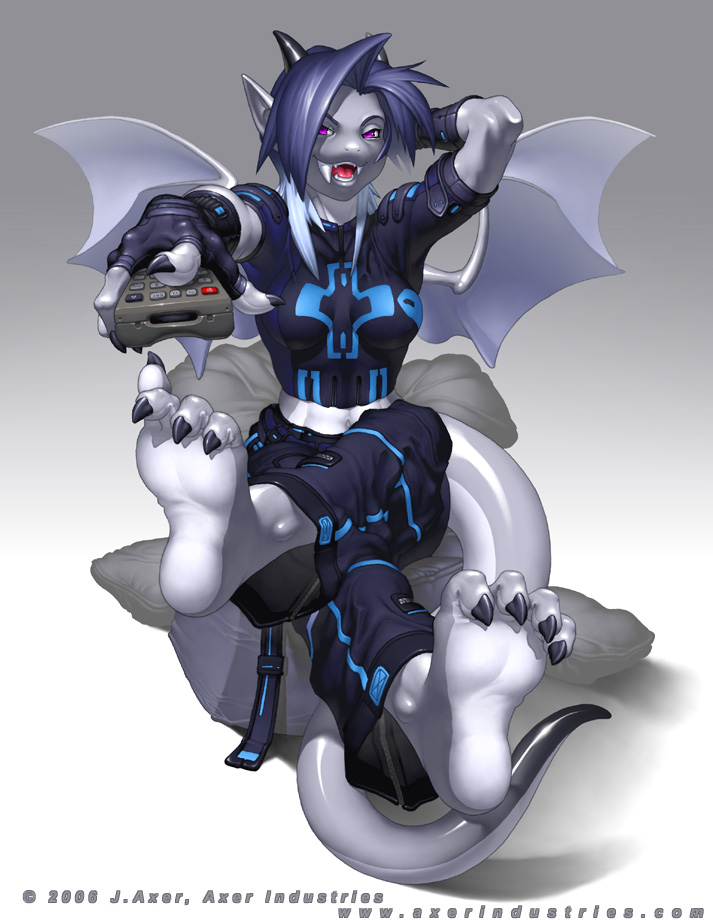 As for our characters, here's what I was thinking. We can change these at any time:

- The human man would be a veteran working in a manual field, such as an electrician or an engineer. He'd be intentionally blander than the dragoness on the surface, but he has a darker past than he lets on. As this would be MC, I don't want to spoil too much now.

- The dragoness (YC) would be an immigrant to the city of Ephesus and be either in college, dropped out of college, or be looking to get into a college. She has a job she doesn't really like, such as a waitress or something, but she needs it to pay the bills.

We can work on specifics and I'm open to changing elements of this if it helps or if you have an idea which you think would improve the setting. Feel free to contact me here or in a PM if you're interested.
Hidden 3 mos ago Post by Aristocles
Raw —
OP