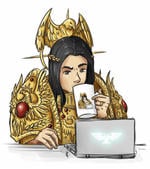 2526 posts
in 3086 days
Seen 3 days ago
Bio
The year is 1914. The imperial powers hold sway over vast continents of diverse peoples, cultures, creeds, and more. From palaces of old look eyes of ancient dynasties or fresh faced revolutionaries. What they see is a land that has seen both suffering and splendor alike. The empires, new and old, stand in a complex series of entangling alliances with one another, binding them to aid should they face attack. The world stands at the precipice of… something. The end of an old era is at hand, and the beginning of a new. To many it seems as though this is the dawn of a true golden age - the wonders of technology bringing about new and never before dreamed of comforts to the world. Most nations of the world are at an unprecedented stretch of relative peace, international trade flourishes, railroads connect the continents, and the world faces the new century with excitement.

However, many face the new age with less enthusiasm, speaking grim warnings of dark times ahead. Beneath the enlightenment and prosperity is a tension building. A revolution in the east casts a shadow across the age old monarchies of the land. Rumblings of popular sentiments and nationalistic fervour perfuse the land.

The new century can bring enlightenment and prosperity or suffering and death. War is a certainty at some point, for sure. Any little scuffle that might flare up will be over by the new year - no nation would be fool enough to sacrifice their economy and millions of lives in a true war. Still, at times, the pen fails and the sword must be taken up - but, when all is said and done, ‘tis a sweet and seemly thing to die for one’s country.

So with that out of the way, this is an interest check for a nation RP we plan to host on discord. We’ve already got much of our map filled out, and we’re looking for a few more people to join the clusterfuck to help populate it a bit more. If needed, we can always clear up some space held by colonies and the like. The advantage of hosting it on discord is we can be more active and write shorter, more frequent posts preventing the stagnation common in Nation RPs on this site. I’ve attached some maps I’ve created for it, don’t mind the funny placeholder names.
A map of the geography of the land

A map of the countries, so far

Please feel free to let me know if you’ve any interest, and I will send you the discord link.
1x Like