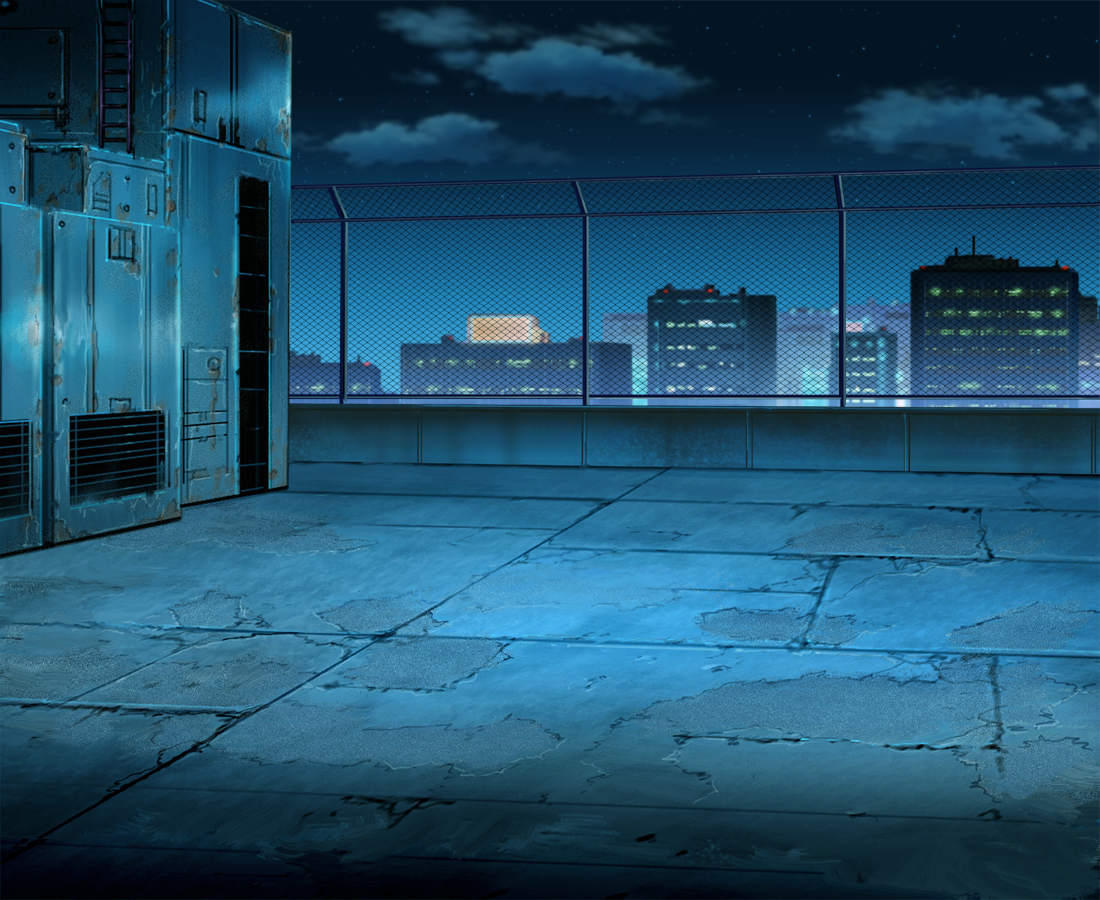 Minato Ishida was standing on a precipice.

On the roof of the Sarayashiki Junior High School, he felt at ease. He'd come here during the day between classes, or skipping gym, in order to look down on all of his classmates from up on high. It was less lording over them and more...well, something else. It was difficult for Minato to accurately describe. When he was still an acceptable member of his student body - back when he was part of the Disciplinary Committee working for the Student Council, Minato would post up here like an eagle's nest. Now?

Now he just looked down at his turf. Standing along the barrier, leaning his head on the chain-link fence, Minato saw the progress he and the others had made in such a short time. His friendship with Ten Ton remained as strong and tight knight as ever, and his trust in people like Yonaka and Ana was only continuing to grow. If the warring factions of various delinquent games were a series of chess matches, Minato was working on establishing his pieces.

But there was growing unrest throughout the various city's. The Ikebukuro Diamonds were making stronger and stronger pushes. Not a day would pass without some punk getting their teeth knocked out in some throwdown, or other smaller gangs swearing allegiance to that psycho, Kazuma Kyoya. As they were now, the Sarayashiki Gang was not strong enough to make their claim. But in time...

Now however, there was something else pressing. The group itself has become a larger community of swelling support from within the outskirts of the school's periphery. As new as they might be, already there were members of the student body who were itching to throw their support in behind the gang. The recent mopping of various clubs throughout the school came with a groundswell of support from the lower grade students and was only steadily rising. This undoubtedly drew the attention of the Student Council - a malevolent group of corrupt students bent on keeping the school under their thumb. Their most recent tactic involved a vicious beatdown delivered to the original members of the gang. Minato tightened his fist just thinking about it. Takuya wanted to act on it right away, but Minato assured him that the right move would be to wait. But was it? Minato had grown unsure. But the gang itself, the ones with the voices...there were additional folks who were beginning to stand out to Minato and his other closest allies. His lieutenants, his closest confidants.

And that's what had brought him here, tonight.

A few hours ago, he had gotten a phonecall from Ikue. Of all the others that were in the gang, Ikue was something of a wildcard. She was an invaluable source to Minato and the others - seemingly always having her finger on the pulse of what was going on throughout the school, an information broker of gossip and secrets. And tonight, her phone-call had an edge to it unlike some of her other more playful ones. She asked Minato to gather the top members of the gang. Apparently there was something troubling her. Minato passed the message on to Ana, who dutifully did just that...

These were the foundations that Sarayashiki's Delinquents would be built upon.

Mai Li and Kevin (who Minato affectionately calls Gaijin) will be our newest members. Whereas Gaijin is familiar with Sarayashiki's gang somewhat and knows Ten Ton (they get along incredibly well) Mai Li is almost brand new, invited to the gang (against her better judgement) by Yonaka. Her motivations are up to her.

Ikue is a member of the gang, but acts as a sort of informant throughout the city. She is a former member of the Student Council from her first year, but left for personal reasons.

Yonaka and Akina have a rivalry, with Yonaka's hot blooded nature coming into conflict with Akina - they are both incredibly talented with a Kendo stick.

Ana is distrustful of Takanashi.

We are all friends, but with friendship does come interpersonal related drama, and I'm open to exploring those story threads.


The ride on the jet was a solemn one for Talon. He sat focusing on the mission, head low. After the briefing, they had split for a short time to prepare themselves, either suiting up or grabbing any preparatory items. Talon wasn't sure how to feel when Metamorph and Nymph prioritized snacks. He hadn't been expecting to be asked that by Metamorph, who Talon was recently having a hard time getting a read on. It seemed when they interacted his moods were all over the place. Or if not his mood, his interests, his body language. It was like they were meeting for the first time every time. It unsettled Talon, but he wasn't one to judge. He knew of Metamorph's abilities, but not of his history.

The others also took Talon by surprise. Zatara's enthusiasm was surprisingly catching the others, and he seemed like he was particularly motivated. When Nymph shyly pointed out that she had made snacks custom made for everyone, Talon felt that same churning he felt back at Happy Harbor Mall. But something was wrong.

When Talon was in the field with the others during his youth, he was taught that there was no such thing as allies. No such thing as familial connections. If someone was hurt, they were left. Weakened knives to be thrown into the dull heap of broken bodies, left to their own devices. Talon was taught never to sacrifice anything for the mission. And sacrifice anyone that needed to be sacrificed. His training was singular, finite.

There is no one else.

There are no allies.

These were the memories ringing in Talon's head. Mixed in with the voices of Metamorph offering his other ear bud to Mirage. With Cybergirl and Brightheart giggling to each other. What would Talon do when his muscle memory kicked in? What would he be like? Would he ever shake that feeling? Could he ever be one of the others?

He caught Hex looking concerned at him from a distance, undoubtedly the empathic boy was able to pick up on his mental distress. Talon nodded to his friend in an attempt to reassure him, but wasn't sure it really stuck.

The others were talking amongst themselves, some laughing and joking, but even Zatara was looking serious. Talon was glad. He wanted the team to deliver on their promise to their mentors. They wouldn't screw this up. Talon wouldn't allow it. He'd do anything to make things right, to make up for the past. But even amongst their growing camaraderie, there was something else gnawing at Talon. It was Rain and Squad B. They had held a separate discussion among themselves, and Talon had grown easy. Self-conscious even. Rain was looking serious sitting in the transport, his arms crossed. Talon stood from his spot and sat in the empty seat across from him. He leaned in close.

"I put you in charge of Squad B because I need someone I can trust to lead the others. Don't think I need you to play babysitter. You're only leading Squad B because of that reason. Everything is riding on this mission." Talon's voice was low but stern. He was expecting Rain to challenge him at this moment, but it was possible Talon could be surprised.

The wind blew snow all around the boots of the team. Talon shivered in spite of himself. He turned to the others. His time as a member of the Court of Owls was filled with these moments. The silent stalking of prey, communicating non-verbally. But this wasn't like that. He was in charge of keeping the team on task. How could he do that? He saw his allies standing around, staring at him awkwardly. It seemed they were expecting him to say something. What could Talon do? What would Nightwing do? Talon wracked his brains. A joke? Talon didn't know any.

Then what would Nymph do?

Talon shuffled his feet. Thinking he would come up empty, Talon searched for the words. Searched for the feelings. Even though it was a short time together, each of the heroes on this team were making a difference in Talon's life. He had thought strength was the only way to impress him, thought that power and ability were the only ways for people to inspire him.

But in such a short time, he was learning it was the opposite of those things that made people heroes. It was Brightheart's enthusiasm. It was Cybergirl's curiosity, Mirage's courage. Hex and his empathy, Fel-Gold Rush and his confidence. Each of them was gifting him something in even a small way, but in a way it ached Talon not to be able to tell them.

With those words, something shifted in Talon. Something softened, if not just for a second. But that same earlier echo spoke back to him. Changed him to the person he was when there was a mission to be completed. Without fail.
In Street Punk Serenade: Delinquent Days → 3 mos ago Forum: Casual Roleplay

Also is there a confirmed date yet?

a date for when the game will start or what timeframe the game begins in?

I don't have a hard and fast connection to one or the other, perhaps pre-cell phones would make storytelling easier. Maybe a 90's aesthetic could be fun.

Is there anyone who has input they'd like to give in this regard?
In Street Punk Serenade: Delinquent Days → 3 mos ago Forum: Casual Roleplay
Hey Leyroy - there's some character things in there that don't fit our story, a famous clone assassin is too high concept for the street level story we're going to be playing.
© 2007-2017
BBCode Cheatsheet