A collection of data

STATUS: I do stuff for reasons at times 4 mos ago 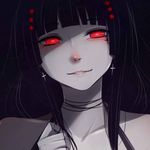 In Sundering Artifice → 2 mos ago Forum: Casual Roleplay
Dammit! Dammit! I'm such an idiot, getting my hopes up like that. The odds of a mechanical genius being in the Sunderer recruits is low. Anyone like that would probably be locked up in a lab already. Hell, I probably would be if they knew my true capabilities.

Eve's brow furrowed at the unfortunate news, eyes drifting down and looking through Penny's chest as she was momentarily lost in thought. It was a rapid dive from excitement to disappointment she hadn't been prepared for. A few seconds later she registered she was still being spoken to, and physically shook her head to ground herself in reality again.

"A-ah, sorry. Spaced out there for a sec. Th-thank you. Though I think Penny is a much cuter name."

She offered up an apologetic smile when she met the girl's eyes again. Eve realized that while she wouldn't be getting expert pointers like she briefly hoped, she could still get pointers from Penny. And who knew? Maybe she could meet her father one day. So for now she stepped back once, giving back the space she had invaded. But she also extended her right hand, the left coming to rest on her hip.

"Suppose learning how robots tick is part of our new job, anyway. Even if you didn't make it I'd love to bounce ideas off you. If you don't mind, that is."

Either she hadn't noticed or didn't care about Penny's struggle with speech, as her eyes never left the girl when she talked. Secretly she liked her quiet nature, even if it was involuntary shyness. Most people were just too damn noisy, so it was a refreshing change.

Hell, an actual friend or two wouldn't kill me, so long as they prove trustworthy. Trustworthy enough, anyway. And granted I don't drive them away on my own. Hm, yeah… forgot about that. Making friends isn't hard, me keeping them is the challenge. We'll see what happens I guess.

She smiled, a hint of sadness tainting her eyes, but the expression was perhaps the most honest so far.

But yeah, same for you. Health comes first. Though I'm not gonna say the updates are not appreciated

Grumpy butt Eve isn't going anywhere, she'll still be there when you feel better
In Sundering Artifice → 2 mos ago Forum: Casual Roleplay
Nah, that's more harmful to both you and your posts. Please take time where you need it
In Sundering Artifice → 2 mos ago Forum: Casual Roleplay
Take your time. Life and personal wellbeing always comes first
In Sundering Artifice → 2 mos ago Forum: Casual Roleplay
Little one, huh? Oh well, nothing I can do about that. Not.. within reason, anyway. Eve mused to herself, looking between Yumi and Sinmara. With her power, the form and composition was no mystery, but she had to figure people out the old fashioned way, piecing bits together through painstakingly slow observation. Red skinned girl an adrenaline junkie, maybe? Hopefully not just a junkie in general. Blonde speech is kinda broken or simplified. Undereducated or learning disability I'd guess. Straightforward and well meaning enough, I suppose. And judging by those weapons, no, more the attitudes, gotta be two of our class' front-liners. Gonna be putting them back together a lot. Great. Eve sighed and tried to keep up a smile.

"Eve. Evie or just V is fine, too." Behind Yumi Eve noticed Sinmara's dramatic shift in mood, and she inclined her head that way. "Your, ah, new friend looks a bit down, Yumi."

Eve didn't so much feel concerned, many people she knew were emotionally or mentally unstable like that, rather she hoped to redirect Yumi's energy away from herself. If she was being honest with herself she wanted the owlish girl all to herself for the moment. A bit underhanded and selfish, but Eve had long ago stopped trying to waste the energy on being a 'good' person. Other than the surface act she put on. Besides, that surprise comment from Penny's sphere demanded her full attention, having already pulled an amused smirk from her.

"You can be honest, it's a bit much. It's supposed to be." She chuckled lightly. "But I appreciate the compliment. I did at least try to make the colors and patterns coordinated. Even if it doesn't last through one fight it's nice to know I'll look good during."

She took a step closer, intruding into Penny's personal space a little, but her body language was relaxed, non aggressive. More like she was curious, which was true enough. She barely had to bend down to inspect the self proclaimed assistant, Gyro. Penny was not a giant like the others but she still had several inches on Eve. Her eyes were on the machine but she was also observing the other girl in her peripheral. She hoped Penny was Gyro's engineer, for a number of reasons, none of which she intended to reveal.

"Mm, Valentine. My surname. Pleasure to meet you, miss Macarthur." It wasn't a lie, to Eve's small credit. And even though Gyro asked, it was clearly Penny that Eve responded to. "Did you make it yourself?"