STATUS: The respect one gives is a measure of oneself, not the other individual. 5 yrs ago 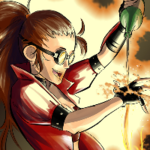 5 yrs ago
Current The respect one gives is a measure of oneself, not the other individual.
2 likes

I'm a DM for a large number of games here on RPG, as well as a player in several others. Many of the games I run are overly complex, or they involve Dungeons and Dragons (which is also overly complex!).

I work 40+ hours a week, and am the proud father of two tiny terrors named Chibi and Chibette and married to my beautiful Wifey. As such, I am quite busy more often than not. I typically write 2-5 paragraphs per reply and try to maintain an excellent level of grammar. If you noticed me glancing at your profile, I probably was looking to see if you would be a good match for my RPing style. Even if I didn't send a PM to you, feel free to send one back!

I enjoy 1x1 RPs and small groups. I'm fond of medieval, steampunk, and futuristic settings, and I'll jump into romance, adventure, and slice of life RPs fairly quickly, although supernatural (vampires, werewolves, etc) RPs get old for me pretty quickly. If you're looking for an RP partner and I've glanced at your profile, then I'm most likely willing to give it a shot, but decided against PMing you because I'm actually kinda shy. But I'm always looking for a new friend!

Please feel free to say hi at any time!

10
In D&D 5e -- The Lost Children → 4 yrs ago Forum: Tabletop Roleplay
FYI Ctrl+W is the command to close your active window (same as Alt-F4), for any who might not know. Your April Fools game needs to step up a notch. @rush99999

Wiev
The kenku's priority was their downed ally. This Jacoby had been healed slightly by the slow but effective Goodberries, aptly named to a degree that any kenku would be proud of, but he was still in a severely weakened state. There wasn't much that a druid of Bobbin's low stature could do to heal his allies, but he could do something. If the tendrils of the Green Earth had taught this kenku one thing, it was to balance the taking of life with the gift of the same. And so he whispered a single solitary word, one imbued with the natural energies of the forest. It was spoken in the primordial tongue of the Plane of Air, its sound echoing on the wind and carried by the zephyrs that wisped around them. The meaning of the word was almost as foreign as the voice that bore it, as if the air itself had spoken.

As soon as the magic had taken hold, however, another flame sprouted in Bobbin's hands. His target would reveal itself, thudding to the ground and drawing attention. Weakness to be snuffed out. The just sentence proclaimed to a kidnapper and would-be murderer, hiding behind such petty labels as "bandit." No, this bandit would live no longer.

The same tongue whispered into the flame Bobbin carried, and the fire twisted and soared on the winds, careening towards the Bandit mercilessly. Bobbin would not take prisoners among these scoundrels, although others may wish to stay their own hands. The flames appeared to strike true. Would it be enough to end their foe?

"Save yourselves. Surrender!" Bobbin cried out, his voice that of a tired old man pleading to his enemies. Or perhaps the original voice was to his own allies, but the meaning was still clear: this fight was already won, and although Bobbin was more than willing to allow it to continue with more scorched bodies falling on his enemies' side, he was less willing to allow his allies or the child to suffer.

Bobbin will use his Bonus Action to cast Healing Word at level 1, healing Jacoby for 6 HP.

He uses his action to cast Produce Flame on Bernie, rolling a 17 to hit for 7 fire damage.

Bobbin will move towards Mirdas, but stay outside of melee range of any bandits.

Mavros
As Krusk and his cronies disappeared, Ada felt a twinge of regret that she hadn't focused more on downing the main foe faster. How were they to know that he had a teleportation scroll up his sleeve? The annoyance festered as she placed her bow into her magical quiver, assuming and hoping that the threats were gone for now. Her newfound allies began to perform their individual tasks: tending the wounded, investigating the scene of the fight. Efficient and proactive: two qualities one would expect from warriors of the highest caliber. Well, she could be proud of that, at least.

As the others went about their business, Ada called one of the servants aside. "Please tell the Duke that the threat is passed," she requested quietly. The servant nodded and exited the courtyard to complete the task. Ada stepped forward to glance about the fight herself, but she was rather certain there would be little left to track them by. Whoever had supplied that bag of hot air had prepared him well. Hopefully Krusk's pocket mage was simply another lackey, and not a foe to worry about.

The former duchess contemplated the possibility for a moment, but her contemplation was interrupted by Kethan voicing her internal concerns. "Yes, Uncle. You are wise to suggest such a course of action," she replied with a smile. "I would not force any of you to remain here against your will, but I do believe that Titan and Vincent are the best choices. A fiery caster and a warforged to tune out the pain of blows. We all saw how effective the lightning spells were; it is a shame that you will be missed on our journey."

She returned to silence as Marcus stepped forward, confirming their destinations. Vael Turog was not a place Ada had ever planned to visit, despite its proximity to the Seat of Mavros, but there was a first time for everything. "Caelmarth lies a couple hundred miles to the west," Ada cautioned. "Even floating on the wind, it will take several hours for you to travel. We shall have a similar distance to travel north ourselves, unless anyone wishes to teleport us there faser." Sadly, teleportation lay outside the meager spells that Ada had been able to glean, at least for now. She found herself lost in thought once more as she looked back to where Krusk had disappeared. Would her brother remain safe if the orc returned while she was away?

Ada was snapped back to the present by the Ranger's approach. Ada held out her hand to receive the gift, a practice she was not unaccustomed to during her tenure as duchess. What she was not expecting was the extreme detail and precision crafted into the emblem. Silence overtook her as she peered closely at the intricacies, how the wolf's fur seemed to ripple in the breeze as it stood majestically on the hilltop. A near-perfect rendition of her family's crest. For a solid minute, she immersed herself into the detail, amazed that one person could craft this. A tear formed in her eye as she realized... this represented what she was turning her back on, what she would lose should the worst come to pass. She surreptitiously wiped away the teardrop before it could find its way down her cheek. "Very-- ahem..." Ada cleared her throat, not realizing that it would sound so weak in this moment. "Very well done," she continued. "I shall make sure that Vinny sees this. Your gift is... much appreciated."

A moment passed before the Duke appeared from the keep, striding forward purposely. "I apologize that I was unable to aid you in your fight," he announced quickly before any could accuse him of cowardice. "As the only current heir to the Seat, I must recuse myself from dangerous positions. If I were to be lost, Mavros would be thrown into chaos, and Savoyne would have a field day. More than likely, they would wrest control from the Mavros family again, and our autonomy would be rescinded. I envy my sister and her journey with you, and I congratulate all of you on your swift and fruitful research. If there is aught I can assist with, I am at your disposal."
In Beginner's DnD 5e Game - Group 2 → 4 yrs ago Forum: Tabletop Roleplay
One by one, the party members seated themselves into the boat. The journey back to the bridge was uneventful, and the party passed their deceased ally on their way back, barely recognizable from the other decomposing puddles of ooze on the ground. A brief moment passed where some of the party paid respects to the fallen ally, but they continued on their way.

As soon as they reached the top of the stairs, it was evident that a large number of people were outside. A quick surreptitious check would reveal that there were soldiers at every nearby exit, and the front doors were open, having been burned away previously. No fewer than a dozen people could be spotted outside, almost entirely human. From the lights of the torches some carried or cantrips on others' weapons, they appeared well-armed and well-trained. They also were all dressed in the Bourgund uniform that had been seen earlier during the parade. Night had long since fallen, and by anyone's guess, dawn was probably just around the corner.