STATUS: As a response to recent events within my country, I will not be participating in any “patriotic” events in the upcoming days. 1 mo ago 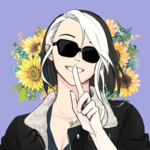 1 mo ago
Current As a response to recent events within my country, I will not be participating in any “patriotic” events in the upcoming days.
3 likes
1 mo ago
This guy's got the right idea, he wore the brown pants.
2 likes
2 mos ago
Happy Pride Month to everyone! ^-^
7 likes
3 mos ago
Why is the rum always gone?
7 likes
3 mos ago
Back in town. Posts will resume tomorrow!
1 like

In Adventure (A D&D 5E Game) → 3 mos ago Forum: Tabletop Roleplay
I just realized I should probably have Aura purchase the materials for Find Familiar, just incase Hawk go poof. I would assume Aura could find somewhere to buy about 50 gp of incense, herbs, and charcoal (not each) yea?

Also if we are splitting the money evenly everyone gets:

This is all off topic and I guess could be a trigger warning? I'll remove if asked, also I apologize if this is uncalled for, I don't have many people I could talk to this about.

This dude on fb was saying how changelings are so non-binary that they were known to cut off or remove their privates. Of all my years playing, from 2e ad&d to 5th (skipped 4th), I had never heard of changelings mutilating themselves just to not identify their genders, especially when they can simply alter their body however they want.

As someone who regularly plays Changelings I can say definitively that they do not need to cut bits in order to change. Whoever thinks that is an idiot. It's as easy a process as a druid wild shaping. No self mutilation happens.
In Adventure (A D&D 5E Game) → 3 mos ago Forum: Tabletop Roleplay

That isn't a head canon. That's just straight up what Flicker thinks of Aura xP

Lol Aura isn't actually like that but it's hilarious that Flicker thinks like that.
In Adventure (A D&D 5E Game) → 3 mos ago Forum: Tabletop Roleplay

@rush99999 Question: is there anywhere Flicker can buy Cook's Utensils? Because their starting gear didn't include it, and they need it if they're gonna cook delicious meals for their friends.

(I headcanon that Flicker had Cook's Utensils at some point, but then they lost them at some point on the road, and they are slightly suspicious that Aura took them and spirited them away inside her lamp. They know logically she would have no reason to steal them, but they can't help but wonder xD)

<Snipped quote by Cao the Exiled>

I dunno, I feel that would be kinda funny. Like, imagine Plasm having to ask Aura if she can use her lamp to store her skull collection, and Aura being like "Yo sure us warlocks need to stick together I don't judge"

The next morning Gil was woken by Sioban. The Prince groaned and sat up not wanting to be awake just yet. “Wake up sleepy Prince, we got things we need to do today.” The upbeat voice of the shaman rang out as Gil rolled his eyes and stood up to stretch the sleep from his limbs. This seemed to please the Shaman who left Gil to prepare for the day. He dressed himself in his most casual outfit. His clothes were nothing special. If one didn’t know better he could easily be mistaken for a common member of society. Only those who knew of the significance of his braids, beads, and threads would be able to pick out that he was royalty. He doubted many of the Astalians would notice though.

After getting dressed for the day he left his room and found both Sioban and Aldar waiting for him outside his room. “The King has ordered that we remain within the castle grounds without an Astalian guard’s company. Something has changed and he clearly wishes to keep it out of the ears of the public for now. I will accompany you for the day.” Aldar said bluntly as Gil walked past the two and headed toward the dining hall.

It seemed his entourage had other plans as Sioban pulled Gil toward the direction of one of the gardens. “Before you partake in a morning meal, Aldar thinks it is a good idea we take the time to grant you blessings for today. It will only take a moment.” Sioban explained as he led the Prince into the garden and toward the small creek that babbled through the back of it. There Gil kneeled beside the water and Sioban began speaking in orcish, requesting that the gods of nature as well as the ancestors look after Gil in his activities for the day.

The ceremony was brief but it was long enough that Gil arrived to the dining hall after the eldest Princess had already made her exit and the others seemed close to finishing as well. He gave them all a polite nod and a morning greeting in Orcish as he took a place at the table and took in the options he had to eat. Aldar took a post on the wall behind the Prince but it seemed the Shaman had wandered off to do whatever it was Sioban had found to entertain himself with which didn’t surprise the Prince one bit, the Shaman had always been one to do his own thing.

“Big day today yea? The Ball and all?” He questioned just to see if he could start some idol chatter while he casually piled his plate high with all the food that could fit. He wouldn’t be offended if nobody answered him after all they seemed to be in their own conversations already.
In Adventure (A D&D 5E Game) → 3 mos ago Forum: Tabletop Roleplay

Would anyone object to me speeding things up a little now? Nothing else is going to happen at the tower and I don't want to keep Haruki waiting to join in for much longer.