Mahz is the Admin. He's the man with the plan and the Guild's head honcho.

4 yrs ago
Getting some more work done on the Guild today and tomorrow.
25 likes
5 yrs ago
Investigating the catastrophic performance issues.
1 like
6 yrs ago
I'm back. I had some personal issues to take care of.
13 likes
6 yrs ago
You can change your username once every 3 months, and your old username will still link to you and won't be recycled. PM me if you want yours done.
19 likes
6 yrs ago
Feel free to help out instead of complaining about free stuff on my sidebar. Here is the source code: github.com/danneu/guild
30 likes

I guess the simplest solution is to allow double the dimensions and letting them scale to the current width x height when rendered.
In Mahz's Dev Journal → 4 yrs ago Forum: News

All I want to request is that the contests section be put a bit higher on the main page. As it stands, it is below even the literal test forum, and above only one other subforum, that being Suggestions/Problems. I could host ten contests a week and advertise in the status bar, but if people don't actually see it on the main page it may as well be just a myth to them. "Contests section? What contests section?" - Most people, probably.

It's honestly a bit baffling that the persistent world sits far above everything else, save for the News subforum while the contests section may as well be in the Guild equivalent of the Underdark.

Yeah, good point. Why is the test forum above *anything*? I'll fix that right now after I write some more responses. But please ping me here or Discord if I forget since I need to change it with a direct database update.

The PW category sits at the top so that people see it since it's basically a constant experiment and it's in a constant state of flux unlike the static roleplaying forums. This is surprisingly controversial but there's also the paradox that even worse visibility is going to ensure it never even has a shot. I figure everyone uninterested just collapses it. Ideally you'd just be able to move it according to your own preferences.

But this is also a general problem with the fact that the forums are presented as a stack. It's annoying that forums at the bottom are simply going to get fewer eyeballs. I think the model is kinda archaic for this reason and you'll notice that modern forum platforms like Discourse try to give everything equal visibility.

Your comment made me go "yeah, why *are* the contests way down there?" but then I remembered that the reason is because the homepage sidebar has a "Current Contest" widget that moderators can set that will show up at the tippy top. Which is even better than having to move the contests forum. I totally forgot about that feature, and it's basically been neglected since the long dead period where we had no contests.

I'll send you a PM to figure out if Contest Moderators can access the feature and if I need to fix the code so that you can. Sorry, wish we caught this a year ago.

Edit: Looks like you should be able to access the system according to the code. I just neglected to tell you about it. 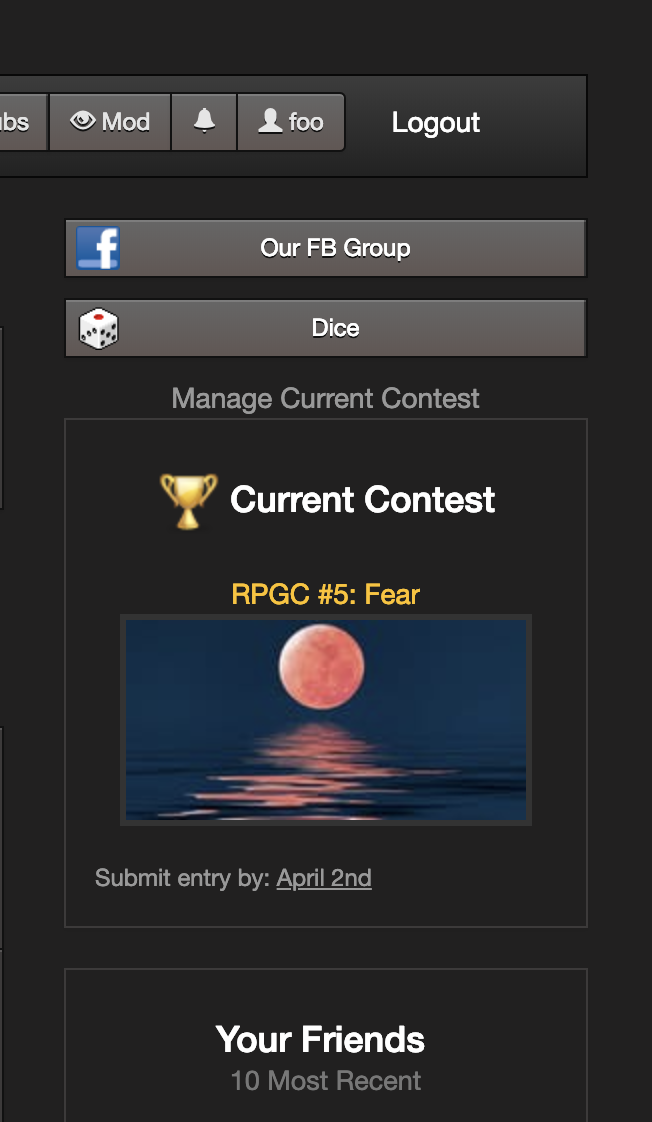 @LegendBegins Actually, horizontal works better since vertical images will need to be stretched to scale to the aspect ratio of devices.

In Mahz's Dev Journal → 4 yrs ago Forum: News
@Lady Amalthea A simple feature that would improve the status system for me is to let people reply to statuses directly instead of writing their own status responses. As if they were tiny little forum topics.

I agree though, you shouldn't be able to rapid-fire status updates and have them all appear consecutively on the sidebar. I'm thinking of a simple mechanism where only your first status message in a 15 minute time frame appears on the homepage or something like that.

Improvements to Name request feature. Mostly a way to go back to old names, make easy case corrections, and some other possible improvements.

The tag system for roleplays could have some additional tags added. It's a useful feature that can help improve first impressions on what an RP may be about before you enter, read and realise that "Small group, fantasy, historic" covers so much more variety than you realise.

On the front page with the latest roleplays, perhaps ones that are checked as 1x1 don't get added since only two people are in it and it doesn't need to be advertised for others. That whole sidebar feature is a great idea, but sometimes it displays too much information.

Improving the name change system is something I'm working on as we speak.

I'm open to adding RP tags, but I need some guidance. Wish there was an easy way to continually poll the community on new tags so we get a diverse amount of input. Like if any time you were on the New Roleplay page deciding on the right tags, you could cast a quick vote on what you'd like that doesn't exist.

Usually when someone tries to give me a list of RP tag suggestions, it's loaded with their own niches/biases like "Klingon" and "Borg".

And every tag I add dilutes the existing tags, so I am cautious.

Interesting point about 1x1 RPs in the sidebar. My suspicions are that the sidebar does more to help the forum feel lively than serve as anyone's main resource for finding RPs. But I can also appreciate that it's nice to show up on the homepage when looking for players, and group RPs certainly have the harder job than 1x1.
In Oh hey, it's me → 4 yrs ago Forum: Introduce Yourself
@Ribbon Welcome.

And yeah, I started with a limit of 50k characters and almost on the same day, someone hit the limit. Blew my mind. Bumped it to 100k. And then enough people hit that limit that I figured I might as well increase it again.

It's mostly just people who perpetually update the same post for whatever reason, like a roleplay GM who appends important IC events to the first post.
In Mahz's Dev Journal → 4 yrs ago Forum: News

we can be 100% sure it is not organized at all because as has been stated a trillion times before, it was made by mahz from the ground up which means there is no uniform method of organizing the code (or rather, organizing it by blocks). in fact, as far as i know, this has created large problems before because, while this allows the code from mahz to be versatile as hell and for him to add in (virtually (get it? virtual?)) anything he desires within the limitations of his coding capabilities, it also means that if you change something there is a risk of fucking everything coming down crashing.

it's for that reason why most 'simple' things end up being less simple on the guild. a point of frustration for me but i can see the benefits from mahz' side.

again this is to my knowledge and how i've had it explained to me a few times before - whether it is reality or not i couldn't tell, but the code for RPG is open source and you can look at whatever you wanna look at here to confirm it for yourself

I was catching up on conversations I've missed in this thread when I encountered this year-old post which manages to completely reverse the character of the challenges of a project like the Guild.

I'm surprised that your take-away from the last five years was that I was more encumbered by technical challenges than the struggle of consistently allocating my free time to this project instead of any of the other splendors that life has to offer.

Though I can see how you might arrive at this conclusion if, during a bout of Guild downtime, you're imagining me putting fires out in a server room when in reality I'm trying to enjoy my friends and family and tacos and beer on a beach while the clink of my shackles snaps me out of it.

The Guild codebase is relatively well-organized and it's extremely simple, especially for a legacy 5+ year old solo volunteer project that more or less delivers on the sheer dimensionality that is a modern forum.

For example, the areas in which the Guild does struggle, like its BBCode editor and the time sink of UI development, are basically incontrovertible challenges of my profession, yet I've managed to approximate, in my free time, commercial analogues that fund a team of developers to work on them.
In Name Change → 4 yrs ago Forum: Suggestions/Problems
Done.

Haha, I actually just pushed a provisional fix for our Skype issue as you can see on Github. In a moment I will turn it on if I don't see any unexpected console.warns. Finally.

Damn, those custom backgrounds look sick. I'd love to at least do that on the homepage to liven things up. Got a source on some cool bg images I can try out?
In Mahz's Dev Journal → 4 yrs ago Forum: News
I've been patching various long-standing bugs in the Guild software today and will continue working on it through the week.

If anyone has any issues or quality-of-life improvements that have been on their mind as they use the forum, feel free to let me know here, on Discord, or via PM.

I could work full-time on the Guild for 100 years and never run out of work, so hearing actual requests from yall helps me prioritize.

Maybe I'll even have time to land a large feature, not sure yet. But there are plenty of papercuts for me to fix.

Either way it's been a while since I checked in on this thread.
In Freeing Up An Account Name → 4 yrs ago Forum: Suggestions/Problems
@Architect Sure, I renamed them to [@Vile0].

Let me know if you friend has any trouble.

In ~Hola~ → 4 yrs ago Forum: Introduce Yourself
@DTHar Welcome!