STATUS: I just force Bork or Shiva to RP when I need a GM. 2 yrs ago

2 yrs ago
Current I just force Bork or Shiva to RP when I need a GM.
1 like
2 yrs ago
I think the main thing with any IC is a good pitch, I've joined plenty of RPs because the pitch was good (but rarely do I care about how pretty the thread is).
3 likes
2 yrs ago
Some questions are just curve balls though. Traditionally the answer to "Do you support white supremacy?" is an easy no, unless you're either an idiot or racist or probably both.
10 likes

In Falling Skies: Reboot (Mecha, Space Opera) → 1 yr ago Forum: Advanced Roleplay
I've got something in the works, but likewise just wrapping up my semester so it might be until Monday before I post.
In This isn't working out → 1 yr ago Forum: Off-Topic Discussion

Okay I'll lay some cards on the table. Some books mentioned here already get a nope from me, Atlas Shrugged for example. I'd also probably nope on a relationship if someone told me their favourite book series was Harry Potter. It's a kids book, and a poorly written one at that, grow the fuck up.

If you're going to pick children's books or YA as an adult, at least pick Redwall, just saying.

I do agree with a lot of comments here, I think my one thought in terms of people saying they love children's books or YA as an adult (over 18), would be that it's kind of odd to me.

Unless, perhaps, the person is really mostly talking about nostalgic feelings (e.g., I don't think I would legitimately pick Redwall as my favorite book anymore but I do remember it with a lot of fodness and nostalgia).

Just felt like repeating to Atlas Shrugged is truly an awful book.


Man, you two would hate the millions of other general self-help books that get published every year.

I think it's less of an issue because it's a self help book and more of an issue of the overlap that exists between people who view Jordan Peterson as a) interesting, b) insightful, or c) a person worth studying and people that I don't want to date is sky high.

Although generally, I'm pretty disdainful and critical of self help books. However, there's a difference between books loved by mostly sad moms and books loved by some really creepy dudes (not exclusively, but my limited experience hasn't been great with Peterson fans, so to save my own time it's an easy red flag).

Academically or in terms of research I just get really tired of Peterson going off the rails and babbling (poorly) about things he doesn't really seem to understand or have studied. He was really at his intellectual peak when he published his Carl Jung fan fics and got tenture.

In The Elder Scrolls: Stormcrown Interregnum → 1 yr ago Forum: Advanced Roleplay
One disgraced Breton arcane academic (formerly of the Arcane University) dedicated to defeating the tragic stigma hanging over the wonderful schools of Conjuration and Mysticism by fighting for freedom...coming right up (relatively speaking).
In This isn't working out → 1 yr ago Forum: Off-Topic Discussion

Went to a guys house and he had Atlas Shrugged on his coffee table. FLEE FOR YOUR LIVES!

If a person has anything by Jordan Peterson on their bookshelf.

Currently powering through a book about the Terror and the French Revolution so I feel this setup!
In Falling Skies: Reboot (Mecha, Space Opera) → 1 yr ago Forum: Advanced Roleplay
I'll try to post over the weekend, just hella busy during the weekdays this week.
In Winds of Fate - A Thieves' Adventure (Semi-Tabletop) → 1 yr ago Forum: Advanced Roleplay 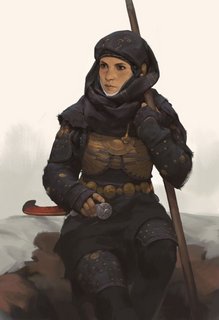 Nora had left as the others faded out of the room. They were not her friends. She did not like most of them. And she trusted them even less. They were bound by the promise of coin and Vargas commands alone. Fragile strings, weak ribbons of loyalty that she suspected would tear apart at the slightest tug. She would keep them steady with her blade if she had to. The big man would be useful if it came to it.

She retreated into the small room she had in the back of the Faded Lantern. A small candle burned on the table, just as she always requested. There was nothing to discover in her room and everyone in the Faded Lantern knew better than to try and steal from her. She had only had to teach the lesson once for it to be understood that her quarters were strictly off limits to everyone but the young serving boy that Vargas paid to clean. One lost hand sent a clear message in any language.

Nora had handed a list of supplies to Percy on her way. Some more gunpowder, two bags of bullets, and all that she could think of for an expedition into some ancient ruins. A good length of hemp rope. She expected trouble. She expected a lot of trouble. Bandits seemed likely, other thieves seeking lost treasures. Secrets never stayed secret for very long. Her mind was free from the warm, enfeebling embrace of the wine she had been offered. Her thoughts were clear. She was wary. She trusted Vargas. She trusted his greed, it was predictable, and she knew that so long as they returned with enough coin to pay their debts he would have no interest in betrayal. However, the others she did not trust. They were fat with water. They were drunk with comfort. She would watch them carefully.

She would watch them carefully Nora thought as she settled into an easy sleep. She hoped that the others would be wise enough to spend the night in bed, resting and preparing themselves for the voyage ahead. She was a morning person and she would find them all before the sun had risen.
In The Sunday Group - Bumps in the Night → 1 yr ago Forum: Advanced Roleplay
Val wouldn't have stopped. She wouldn't have listened to the shouted wait, but she was tired. So tired. Running wasn't as fun as she remembered. Running while being shot at was distinctly less fun than she could remember. She panted, leaning against a nearby wall and turned her fading eyes in the direction of the demonic monster that the Frenchman had turned into.

She wasn't sure why he had stopped running. Not at first. She thought the magical command was pretty clear about not stopping. The giant red letters and foreboding verbiage caught her attention right as she was about to toss an insult or two at the sulfur smelling fiend in front of her. She let out a deep sigh and thought for a moment about what to do. Planning was never her jam. She hadn't expected things to get hot so fast. She could feel the gun in leather satchel. It felt heavy and it felt hot. She wasn't going to use it. She wouldn't. She wasn't a killer. She wasn't like the others.

"Fuck it, let's go see what RESTRICTED really means," Val said with a shrug and a cough as she stumbled towards the Frenchman and the door. Hiding was far better than running. The others could be flash, she preferred to vanish into the shadows of some cold corridor.

Val decides it would be much cooler if the resident demon monster thing kicks down the doors and they sneak out through some spooky corridor.
In Falling Skies: Reboot (Mecha, Space Opera) → 1 yr ago Forum: Advanced Roleplay
Fair call, just let me know if this kicks off again in the near future!
© 2007-2017
BBCode Cheatsheet