Advanced Interest Check
General Interest Check
Premise
The year is 2051 in the island metropolis of Ominar.
Night hung over the ocean like a pall of roiling smoke, the gentle curls of pitch-dark brine batting it away for a brief second before it settled against the still surface again--a dance of two steps executed in rhythmic harmony. The motion of the waves breathed life into the dark, and it encroached readily across the glassine surface of the water until it broke upon the shore of a magnificent island. It lapped upon the shore like a second sea, buffeting the onyx black rock in its clamour for the distant brightness above, but finding no purchase, and sinking back to its lonely duet with the water.

In stark contrast to the murky depths of the island, an effulgent radiance blanketed the distant beyond. Argent lights danced languidly across the glassy windows of the many skyscrapers that pierced the bustling city’s skyline, cavorting with the caliginous hues of night painting themselves where the light could not reach. Wind whistled between the buildings, bringing with it the briny scent of the surf that encompassed the island. Even at night, the city was alive with movement. Sights and sounds radiated from every which way, a unique symphony of cultures and races woven together into a sonorous tapestry that could only be found here, on the shores of the place called Ominar--humanity’s metropolis. A bastion of magic and magitech, and a haven to all three of the races: those born of chaos and discovery--Licentia; those born of order and stability--Prae; and those born somewhere between, with so many choices to make--Humans. A city born of a necessity for both equality and progress. Beneath the velvet blanket of midnight, everyone is equal: but the night does not last forever.

Soon dawn cuts across the depths below and the sky above, smattering its dappled light across the breadth of Ominar. The atmosphere of the city shifted in its wake, from intrigue and mystique to something sterile and refined. In this city, in the harsh brightness of day, money spoke louder than the music of the night. Where cultures once danced together in a cacophony of color and sound the orderly shuffle of business now reigns. Though the streets are still filled with life and movement, it is a much different sort to that which dominates the night--when this city breathes, the world moves to accommodate it.

Though the gentle lustre of the moon delicately frames the interplay of light and shadow, the coruscating sun is harsh, casting its shadow deeper down into the realm of murk and gloom. Beneath this veil the underbelly of the great city churns unending, feeding on everything the daylight scares away and pouring out misery and profit in equal measure. Ominar is a city of progress, built by--and for--those with drive and purpose. It caters not to the mundane, and it suffers not the indolent. And so, as with all things burningly bright, it casts a vast shadow--one whose presence is only made more terrible when weighed against the light it shuns.

Extreme as the cycle may be, it is natural to Ominar. Every nook and cranny filled with shadow, every mote of light in the sky--these are simply part of something greater than themselves, simply part of nature. And yet, even in this great to and fro, there are foreign elements. The ebb of the tide brings with it something neither light nor dark--a vessel borne from faraway shores. Its passengers bear familiar faces, but harbour an unseen intent.

As they step into the bounds of the city, as they alight upon its dock and climb its crested hill, they bring with them the beginnings of something else. A whisper of a wave whets its growing appetite upon the shore, rebounding with greater strength again and again and again.

Though unformed as yet, it is wave that will leave nothing unchanged in its wake.

It is your choice whether this tide wipes the slate clean for you to build an empire atop, or you resist its inexorable push and fight to preserve what is.

How will you fare when history’s reins are thrust upon you?

Information
The below is but a primer, informing you to the races of Manifest Anima. There is much more where this came from!

Humans
Humans are still your generic fantasy race! They have the highest threshold for magic of the three races. Rarely, particularly powerful human mages are born with natural purple hair.

Prae
The prae are a humanoid race that hail from the realm known as Priscus. Prae share many physiological similarities with humans--including vital organs, cellular structure, and endocrine systems--but with a few key differences. Prae are born with a crystal that is located somewhere on their head (almost always the forehead, though exceedingly rare exceptions do exist) that draws in ambient vis from the environment. This sustenance of vis is required in addition to the caloric sustenance they would obtain through other methods, and prae biology is not well-suited to the consumption of vis-infused food or water, so the crystal is a vital part of their biology. The prae ostium is comprised of narrower channels than a human's, also, which leads prae to have reduced innate magical ability. Prae also have markings that occur naturally (originating from their crystal) and represent something important to them. Prae reach maturity at 18, and age slowly from there on out. Depending on the level of ambient vis available to them, they are capable of reaching up to approximately 800 years of age.

Licentia
Licentia are, at their core, beings of chaos and change. Where Prae dwell comfortably in the bedrock of Order, and humans soundly between the two, Licentia are never comfortable and never satisfied with the state of the world… almost as a rule. They are highly individual beings, with no two being quite alike, even within a given species. However, there exist certain things that unite them, no matter what form they take, what magic they wield, or what goals they pursue.

What to Expect
Below are detailed some of the rules, expectations, and of course, themes for the RP.
Hidden 1 yr ago Post by CorrosiveCherry
Raw — 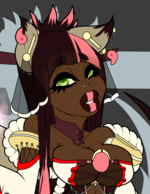