King Tentacruel King of the Sea

Member Seen 1 day ago
King Tentacruel
King of the Sea

7 posts
in 34 days
Seen 1 day ago
Bio
Ja'vassa Anair, the legendary hero of Skyrim; infamous for his unrivaled skill in magic is well known for his love of adventure. Whenever he's not busy at home with his children, he'll frequently be seen on the road, researching whatever comes his way. Whether he learns of some mystical weapon, an untapped gold mine, some ancient Ayleid ruin, or something altogether, he's more than happy to delve into it and find all that he can. Recently, following yet another research expedition, the Khajiit would find himself in a world not his own... well, sort of, anyways. He was indeed still in Tamriel, the only difference was that he found himself stuck many years in the past, well before even his own mother and father would be born. After arriving, he'd meet with some of the infamous heroes of ages long before the present. How will the Dragonborn get along with these legendary figures?

-------
Terrible plot aside, essentially what I'm seeking to do is send my Dragonborn into the past, preferably during the events and stories of previous Elder Scrolls games; particularly that of Oblivion or ESO, but I'd be more than happy to toy around with Morrowind, Arena, and Daggerfall as well. If you'd prefer, we don't have to follow the plotline of any of the games, either, we could always go with some of the other important events in Tamriel's history, like Tiber Septim's conquest, the various Akaviri invasions, etc, etc... Both OCs and canons are welcomed to join. I would also really appreciate a romance forming between my Khajiit and the other heroes (MxF only), but this isn't required. If you've made it this far, feel free to drop me a DM!
If Ja'vassa intersts you, but not the plot line, feel free to message me anyways, I'd be happy to plot out other things. Crossovers of all kinds are adored.
Hidden 1 day ago → 20 hrs ago Post by ZAVAZggg
Raw — 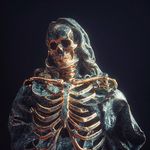 2856 posts
in 736 days
Seen 20 hrs ago
Bio
Arena:
0 / 0 / 0
The plot does interest me, but since it'd take me another playthrough of Oblivion or Morrowind to be sure I have an accurate character from either of those games, I'm wondering if you'd be willing to do a crossover instead. The two characters for such I had in mind were Lucifer from Milton's Paradise Lost sans some minor changes, and Dracula from Castlevania Lords of Shadow. Again he's been changed slightly since I used him for another multiverse type roleplay and since most of his powers were just too broken to use.

My idea was that one of them ends up in Skyrim somehow, Lucifer makes more sense in this regard honestly, and encounters Ja'vassa, becoming wrapped up in whatever plots he might have.

EDIT: After giving it more thought, maybe I don't necessarily need to play one of the ES games again to make a character, rather just use wiki entries and such. My idea, going back to your original plot idea, would involve Morrowind, but not in the sense that it's the plot of the game itself. Rather I was thinking of a plot that could both explain how your Dragonborn ended up in the past while also providing him with a potential antagonistic force depending on how things go.
↑ Top
© 2007-2017
BBCode Cheatsheet