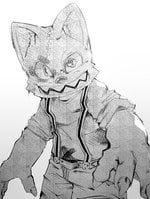 In Aurora, The Land of Twilight and Falsities → 5 yrs ago Forum: Casual Roleplay
@SilverDawn

Pressured gale after pressured gale, Mabel was sent rolling flying and tumbling towards the head of the creature she stood upon. Instinct, or something else pushed her to pull the dice from her pocket and flung them midair along with her. In an instant, they glew, and so did she, a bright yellow-white glow that seemed to quickly perish just as fast as it appeared. Afterwards, however, Mabel was fired towards the head of this beast, faster than the others..

She flew, her legs stabilizing below her as she did so, and quickly she aimed herself for a landing area. Her footing nearly gave out as they collided with the rough skin on the snout of the creature. But somehow she managed.

When she stood tall, turning to her right, Mabel came face to face with the eyes of the creature she stood upon.

"Oooh, secret exit~ that sounds interesting. " Manami swooned at the discovery, though, the lingering thought that there were people of similar rank to her that knew about it made a sliver of self consciousness appear on her face.

Stepping out from the Raikage's Office, Manami let out a deep breath to release the worry that had been building up throughout his entire speech. Her shoulders relaxed as they had stiffened up the moment she entered his presence, while her posture as a whole became more relaxed. The serious expression on her face was wiped clean off her face, being replaced with a cheerful smile placed neatly from cheek to cheek. She spun towards Hanawa, beaming this smile directly at the girl without a single bit of remorse. In a instinctual instant, the blonde girl quickly made a move on Hanawa before she could exit. People often ran away from Manami because she was too 'direct' for their liking, but that was sheer nonsense, nothing is ever too direct. Nonetheless, in this instant Manami would put herself inches from Hanawa's face and began her rampage.

"So, Hanawa was it? I look forward to working with such an..." Her amber eyes fixated on the girl, quickly scanning for a feature that wouldn't be improper to note. "Equipped, such an 'equipped' person.. I'm Kosui, Manami, but I'm sure you already knew that. And not because I'm famous or anything of the like, I just assumed that an individual such as yourself would already know these things. Oh, should I shake your hand or something? That's respectful, I shake a lot of people's hands." Manami rattled on, and on, it was in her nature to be friendly towards people she had no quarrels with. Heck, Hanawa was lucky Manami didn't go for the unwelcome hug greeting.

"We're on a what! I mean, a he, or a she! I can't really tell! All I see is a wing on the far.. Right! Fuck, your phone doesn't work! Rin, catch your useless rubbish." Mabel went on as she continued to scale the pillar, the higher she went the more clear thing became.

They were on something's back, whether it realized that or not wasn't really in question. Because this thing was large enough to one shot all three of them if it really wanted to, just what was it though? The sullen girl finally reached the highest point of the brain-dried-pillar=thingy, and sat on a somewhat flattened spot. She licked her index finger and raised it into the air, she saw that in a movie once, though instead of air dominantly coming from any direction it blew in several and was a complete act of idiocy on her part.

It was a long way down, and she had seen what she needed to see. Mabel stepped down from her little sitting arrangement, missing her footing she slid down the pillar rear-first, as she made her descent down the surface rough edges scratched and skidded down her arms leaving visible marks that worsened until her feet finally touched the ground. Rolling up her sleeves to observe the damage. a few cuts and some scrapes a couple inches in length. She'd live, and there were more important things at hand anyway.

"We're on the back of a massive winged creature. As unbelievable as that sounds, that's literally what's going on." Mabel stated bluntly, pulling her sleeves back down and setting her gaze to the floor.
In [Always Lonely] Naruto: Continuum [Always Open] → 5 yrs ago Forum: Casual Roleplay
Kumogakure - Morning

Manami pulled her hands from her eyes revealing closed eyelids. She grinned from ear to ear, golden strands carelessly falling in her face and the rest placed neatly to the right side. Chuckling could be heard from all around her, four unique voices in total, though each one innocent by their own right. Such voices could only be identified as children, but that didn't matter right now, what mattered was what's at stake. Hide and seek wasn't just a game, no, her pride was on the line.

There were a decent amount of hiding spots around the Academy, though they'd need to be a little more clever than that. She'd played this game many-many times before, there were a declining amount of spots to hide throughout the entire village really. And that was why the new rule was implemented, that her eyes must remain shut throughout the entire game, no peeking. This handicap didn't help much last year, in all actuality, she found the genin quicker than the year prior. It was all trivial at this point though, Manami had been doing this with the Academy kids for a while now, it was a tradition for her to lure in a hyperactive bunch with heads a little big for their shoulders and challenge them year round. It was a symbiotic thing, she made some friends, had some fun, and they did the same while learning a thing or two.

"Nelle~ If you hide in the same spot as last year, you're bound to get caught." Manami scolded out loud in a playful tone, causing a small brunette girl looking no older than ten to scurry from a little hole behind a tree with a pout on her face. "Not fair, you cheater!" She responded, with the bittersweet taste of defeat on each word. "Now-now, my eyes are still closed. Not my fault that I don't even have to see you to know where you are." Nelle puffed, crossed her arms at her chest, and scampered away from the Academy.

The next spot to check.. Manami darted from the flat grassy area where she found Nelle, carefully treading along the nearby fence-line towards the rear of the school. Here there more places to hide, some bushes on the outskirts, a six or seven wooden crates filled with god knows what, and the various nooks and crannies that would hide you from basic sight. The easy thing to do would be hide behind the bushes, that wasn't like the twins though, they had to take things a step further every year.

"Hey! Where's the Takeshiro Twins?!" Manami grumbled in a very good impression of a man's voice.

Immediately, two separate crates popped open revealing the short haired boys dressed identically. The dark-brown haired Gen twin rose from a crate full of various fruit and vegetables, he had a green onion in his mouth when he popped out. The lighter-auburn haired twin Gin rose from a crate of silks and other fabrics, he had a pink scarf wrapped flamboyantly around his neck. In unison the two reacted in outrage. "What the.. Mako! You can't do that!" Pulling a golden strand away from her face, Manami opened her left eye to enact a wink to the boys before responding. "I do what I want, kiddo." Shutting the eye quickly afterwards, the twins performed a jutsu together taking about three seconds to complete, in an instant two barely clothed teenage men with lithe bodies rose in a puff of smoke where they once stood. Gen took the appearance of a more muscular man, though his short scraggily hair remained the same. Gin took a more feminine appearance, though his body was as 'tone' the hair of his transformation was long-curly blonde.

"Wow, you guys are getting pretty good at that. They're almost in my interest range. Keep up the good work." She sarcastically remarked, darting away as quickly as she arrived.

This time quicker than the last, she sprinted at full speed away from the Academy and into the inner workings of the village. Kirin, was always a headache. He was a Yotsuki, and had an ego far greater than the other kids she played with. The boy had talent, she'd give him that, but man he didn't know how to give up. Manami's pursuit brought her to the rooftops of the village's buildings, channeling the chakra into her feet to make the travel a little easier. Her predictions told her that he'd be mobile, since it'd be hard to pinpoint the boy's location through the moving village with her eyes closed. Luckily, she remembered the layout of her village very well, and could navigate through it with ease. Vaulting from atop a smaller stone building, she heard him a fair distance away struggling to find a spot to hide.

"Good spot." She quietly said to herself as she landed safely next to a food stall, and slowly paced towards one of her Clan's clinics.

Stepping quietly inside, Manami nodded to the residents within before reaching behind one of the medicine counters and grabbing Kirin by his shirt-collar. He squirmed, he thrashed, he flailed, all in vain as Manami deadpanned at the boy with an expression that silent spelled 'really?'. Bowing apologetically to those inside, she guided the young Kumo-nin out of the building by his back and once they reached outside she flicked him on the back of his head. His black combed back hair cow-licked, and he grabbed the back of his head in anger, turning towards Manami with a pinked face. "Seriously Mako, you gotta embarrass me like that?" he sneered, and stomped towards the Academy alongside her.

"I mean, I won, right?" She giggled, patting the boy's head in a apologetic gesture.

"Your eyes are still closed." Kirin responded, in a sarcastic and dull tone.

Snapping her eyelids open, the Manami's bright-amber eyes shined as they focused on the boy. She could now see his expression, and she herself pouted at his poor reaction to defeat. It was a quiet day so far, and if luck was on her side, it'd stay that way. As they neared the Academy, the remaining three appeared in the nearing distance, waving the two down in a cheerful manner. Manami couldn't help but turn to Kirin and slip in the words "See, they're not whining." to the boy as they finally regrouped. Kirin took his spot with the other three, they'd been skipping class for long enough and they knew it was about time they returned to the building. "Seeya' Mako!" they said as a group as they quickly scurried into the building. It felt good, messing around with kids on your time off.

But it was about time she got back to grown-up stuff.

"Manami, the Raikage needs to see you." A dark-skinned shinobi garbed in white seemingly appeared out of nowhere stated in a calm yet serious tone.

The girl's head perked up in interest, she then nodded to the man in understanding. The shinobi lead her most of the way, though just as they reached the building he disappeared for some oter pressing matters. She didn't take the front door, that would take too long, insead she scaled he face of the building entering the room aross from his by window. Quickly sliding it open, she tumbled into the room and quietly paced towards the Raikage's door and at last into his room.