STATUS: Have had a severe flare up of RA, so typing hurts a lot. Thank you for your patience and apologies for the silence :( 2 mos ago 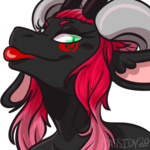 2 mos ago
Current Have had a severe flare up of RA, so typing hurts a lot. Thank you for your patience and apologies for the silence :(
2 likes
2 mos ago
Added my old carrd for extra clarification! It's muse list is not up to date, refer to the one on Dreamwidth.
2 mos ago
Hey, just to be clear, I don’t believe in harassing people over ships/kinks. If you do please don’t contact me. I thought linking my site and DW (with its TOS) made my stance pretty clear.
1 like

I play on RPNow, Google docs, through email, and maybe over F-List/F-Chat. This is because I lost all of my RPs on Skype and now I log everything to read back later! I love re-reading our RPs ;w; I do share my Discord with people who ask though, if we have mutual interest in continuing to talk!

I am disabled and chronically ill so I don't always reply super fast, and may vanish for a while when recovering. This doesn't mean I'm not interested in you/the RP, I'm just sick and it's not something I can control. If that makes you feel unwanted/as if your partner doesn't care/jealous/whatever, we won't connect well. :(

In 1x1 Fandom RPs? → 2 mos ago Forum: General Interest Checks
I have a few fandoms I'd like to play in or meet more people to play with! There's some obvious ones like Pokemon, but also some more obscure ones. Will specify next to the prompt whether or not it's SFW or NSFW(E).

Pokemon - SFW - Plot Desired
No smut or shipping.
Conner's an experienced Pokemon trainer who spends most of their time in the wilds of the Pokemon world, training their team. They value loyalty over all else. Conner's aloof and hard to get along with at times, but would do anything to protect the people and Pokemon around them.

Pokemon - NSFW(E) - Loose Plot
ERP/smut desired, fetishes/kinks can be discussed!
I have two "anthro" Pokemon I'd like to play, my Charizard Charlie and my Mewtwo (extreme).
Charlie's a well-meaning wild Charizard with a friendly disposition. She loves peppy trainers, but her enthusiasm and airheaded nature sometimes gets her into trouble. She LOVES eating berries and... things smaller than her. Maybe a trainer strong enough can come along that's tough enough to take her on! Or maybe he ends up beneath her like the rest of them...
&
Mewtwo can be caught at lvl.70, but what are you really getting into?
PM for the character pages and F-Lists!

Wings of Fire - NSFW(E) - Loose or Semi-Detailed Plot
Smut & Shipping Desired
I have a LOT of different WoF characters and am open to playing the majority of them! Here's a couple of ideas for some of them~
Prince Seaweed runs the trade routes in and out of the Kingdom of the Sea. As one of Queen Coral's sons, he's often forgotten about. Fortunately, other dragons seem quite taken with the prospect of falling in love with a prince and giving their dragonets a chance at the throne... and he knows it.
&
Deep in the dreaded cold of IceWing territory, a cruel dragon lurks. Wolf has a fascination he can't let any other dragon learn of, a fascination with hybrids. Perhaps your a prisoner, or perhaps he spotted you on the new, diplomatic travels of modern Pyrriha, but his cold gaze holds far more than just distaste for other tribes. In fact, the sparkle in his eyes implies something far more sinister... and he's already picked his target.

WordGirl - NSFW(E) - Loose Plot
Shipping & Smut Desired (adult characters)
I actually don't have a great deal of suggestions for this. I can play Mr. Big or Dr. Two-Brains, or an OC. Open to OCs! Also open to others playing Big or D2B if my OC interests you. Kinks can be discussed (but mind control is probably part of the Mr. Big RP, because, yeah).

Sonic - NSFW - Plot
Shipping & Smut Optional, but Adult/Dark Themes Expected
SATAM/Sonic Underground. I can play Dr. Robotnik, and I'll let you guys think on that from there. :U

Original - NSFW(E) - Loose Plot
Shipping & Smut Desired
Mostly furry-type OCs. Open to humans for certain characters. Have a robot I'd love to play. Let me know what your interests are and I'll see what matches. :3

Anyway, hope I'm doing this right!! Comment or PM if you're interested in anything here. ^^
In Checking this place out o: → 2 mos ago Forum: Introduce Yourself
Hey!! I'm Captain, and I'm just looking for more places to meet RP partners. Small groups or 1-on-1 for me, and I don't play with anyone who isn't over 18, SFW or not!

Uhh, I've been roleplaying since I was 10, so 15 years now o: I have over 50 muses and hundreds of OCs of all kinds, but mostly fandom characters and furries, not a ton of original humans.