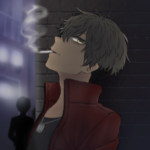 My alternate account. I.E. I am ZAVAZggg and ZAVAZggg is me. Not to sockpuppet or some shit, just so I can actually have interaction between two characters in a way that fits Myriad Realities posing style.

It was somewhat the same for me—emotions flaring. I’m very sorry that it had to go this way, with a hard incompatibility rather than something we can work around. I hope that, if you have another idea you’re passionate about, MR will be a place for you to play with it. But I can understand if it doesn’t feel that way.

For the time being, this will probably be another extended break. The Living God idea for Zachary isn't getting deleted, and I might find somewhere to use him, but currently no other ideas have really struck my fancy like his and really the ideas in that CYOA in general.
In Myriad Reality → 3 mos ago Forum: Free Roleplay

Sure, and I think it's fair that you want it how you're envisioning it since it is a passion. But one of our bigger concerns is that using Planes will end up locking him out of interaction because of how unexplored the concept is. And sitting there with no one to interact with isn't fun for anyone.

And I understand the concern, since I almost wrote myself into a non-interaction and had to use an item of sentimental value to get out of it.
In Myriad Reality → 3 mos ago Forum: Free Roleplay

Yeah, I understand that. Speaking wholly as myself—I was in this situation twice or thrice before, when I was very new to MR. It’s frustrating to feel like your creativity is being limited, and even worse to feel like there’s no way out and no way to keep your idea as it is, especially when you’re passionate about it.

We definitely want to work with you to make the idea work, but just like for me when I experienced this, there is something MR cannot budge on.

Unfortunately, I don't think this is something I can budge on either. I might come back with a different character, I have been working on a necromancer who sees necromancy as a matter of survival tactics rather than evil, or I might not. It honestly depends. I think that, for the time being however, it'd be better if I just took a step back for a while. Much as I try not to, emotions did flare, and I need to get those in-check before doing anything else.
In Myriad Reality → 3 mos ago Forum: Free Roleplay

Because it's not a limit to creative freedom—it's a solution to prevent a situation that gets arbitrarily more complex than it needs to be. I don't consider it limiting to say that there's an existing mechanic fits better than a fringe mechanic that isn't really used right now.

Except from my point of view Planes weren't a fringe mechanic until the World said they were a few posts back. I assumed, perhaps mistakenly, that it was actual lore that just wasn't heavily explored but still possible.

And yes, admittedly I pushed the idea even then, but that's because I'm passionate about it. Which is better I think, than me coming back in and dropping out a few weeks later due to a lack of interest.
In Myriad Reality → 3 mos ago Forum: Free Roleplay

@Caldizar
I feel like I understand what you’re going for with Zachary a little more, and I think it’s pretty cool—someone who has absolute power but goes some place beside (and not above) himself where he can’t be absolutely powerful and can figure himself out. Doing that with Planes sounds like it would be purer to the intention you have for your story.

It’s just that, to do that using Planes, although it might work for your idea, would require a lot of overengineering. Like, not a bit of overengineering, but a lot a lot. The World suggested it because he’s the one who came up with it 8 years—it’s at the forefront of his mind, in that sense.

But we work ideas, big and small, into MR organically, as we have for the last several years. Over time, I am sure we would naturally build up to a full theoretical understanding of other planes (only the idea of which we currently have). But they just aren’t anywhere near the stories we have right now. It would be untenable to make that jump now. It’s the kind of thing that we have to hash out, slow and steady.

As a group we have been going back and forth on this issue and can’t really come to a complete decision as a group on what would be best for MR itself. But our consensus is leaning against using Planes for the reasons stated above.

I understand, and since I am trying to work with you all here, if he doesn't work I'll drop the idea entirely. Which actually works out fairly easy given that Subtle power of his. But I won't exactly like having to do that. Especially not after having tried to find a way to make it work out.
In Myriad Reality → 3 mos ago Forum: Free Roleplay

It's not hard to comprehend—it's the fact that him getting sick of his own dimension or cluster works equally well and avoids overengineering a problem for a characterization goal.

Not on the scale at which the source says he operates. Now I know some of that is changed or lost, for all roleplays really, but I once again want to play him how I described. If your lore doesn't prevent it, why not overengineer a bit since it is a workable idea?

Like, by putting him at a scale that he doesn't really belong in, you realize that just limits the freedom of creativity this roleplay touts right? And I'm trying to compromise here to boot, I've said how I'll play him, tried to find solutions, so you can't say I'm being entirely unreasonable.
In Myriad Reality → 3 mos ago Forum: Free Roleplay

Popping in again because why not, again not reading anything, but it basically comes down to: Do you want him to be unique as the only Living God there is, period, ever, anywhere, in any Plane... or do you want him to be one of many? Because if it's the former, a Plane would theoretically work, though we'd need to put a lot of thought into how they work in general because we're not at the stage in MR where even thinking about Planes was necessary. But if it's the latter then Planes simply won't work because they're not infinite or close enough to be filled with countless Living Gods.

I mean his modes of transcendence imply other Living Gods, but they died so he could eventually come about. So they were not only weaker but could die, meaning that I could easily make him the very last one anywhere. And since he has Unbound and is a Versal Constant, no other versions of him exist. Granted they couldn't ascend anyway, but you get the idea. I can say that, for the purposes of this RP, he is the very last one and thus entirely unique. Or I could change the mode of transcendence, though that kind of messes with his character arc majorly.

Additionally, being the sum of several weaker gods means I can adjust how powerful they were accordingly. So maybe powerful in their respective areas, but not enough to say cross into another Plane and such. And Zachary, well you already know what I intend for him.
In Myriad Reality → 3 mos ago Forum: Free Roleplay

Because the problem isn't your ability, his powers, or even his journey as a character. The problem is that it's bending MR's framework for no reason other than insistence that a CYOA justifies it. I can cut/paste each instance of Plane/Existence with 'cluster' in his story and it works just as well, so why bother going for an unnecessarily complex solution to a simple problem?

Look, I just want him to be a Living God who came to hide out here because he got sick of dealing with everyone's shit in his own Existence, before realizing that the right thing to do is go back and rise to the occasion rather than run from it. That's literally all I wanted to do with him. Yes, I'm aware there's a million ways to tell that tale, but I've yet to tell it with a character like Zachary.

Is this hard to comprehend? Actually here's a question, why if there is no issue, should I bother trying to alter what I want to play to fit the lore of a roleplay when a viable solution already exists?

Again, your own lore gives a solution, why won't you take it?
In Myriad Reality → 3 mos ago Forum: Free Roleplay

A goal that works equally as well by making him the god of a cluster whose left his home for another.

Making it a Plane brings about a lot more complications seemingly arbitrarily.

It really doesn't. I already explained how only he in his Plane knows of other Existences, and how all he's done is erase all evidence of his existence there before leaving, but whatever. I've repeated myself more than enough as it is. I really don't get what the problem is. The lore can work just because of how you all wrote it, and you have no problem with my ability to play an OP character, I've said using his powers to just win isn't my goal here...

What more do you fucking want?

Like sure, maybe a Living God is a tad problematic. Just say there are beings who can manipulate entire Planes existent within the Scale, and boom we have an in. I make Living Gods rare to the point of nigh-impossibility, save for Zachary, and we leave the rest up to speculation. Problem solved. Because he won't manipulate Existence, well save his own, and as for any other beings well they may or may not actually exist.
In Myriad Reality → 3 mos ago Forum: Free Roleplay

Your ability isn't my concern. I'm sure you're more than capable of making an OP character be fine, but I'm mostly interested in why there needs to be any exceptions to MR's structure, when to me, a CYOA works perfectly fine within the dimension system that we have in place. I'm not convinced that they're incompatible by nature, particularly because the system was designed to be compatible with everything.

Look, I just want him to be a Living God who came to hide out here because he got sick of dealing with everyone's shit in his own Existence, before realizing that the right thing to do is go back and rise to the occasion rather than run from it. That's literally all I wanted to do with him. Yes, I'm aware there's a million ways to tell that tale, but I've yet to tell it with a character like Zachary.