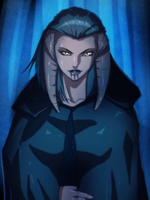 4 mos ago
Current yawn
7 mos ago
Hey, you. You're finally awake. You were trying to cross the border, right? Walked right into the Guild ambush.
2 likes
1 yr ago
v-- I'm stealing that one
1 yr ago
Dominate the country you live in. Learn the power of the dark side.
1 like
1 yr ago
prove your point

I've been around before, but that was years ago and now I just hop in every so often out of nostalgia. Sticking around a bit if something retains my eye. Occasionally dumping my opinion here and there, and some say I even perform the dark art known as roleplaying.

When I perform in said art, I tend to go for multi paragraphs, a few times a week. Rarely any faster, often slower depending on how things go. If we hit it off, I'll stop around to the site more often and I'll be there even if my muse isn't up for it at the moment. Good contact keeps me going even when the text has slowed down. Poor or no contact and I won't chase for it, I'll just move along instead.

I like medieval fantasy and sci-fi, with a little bit of modern. Contrary to my alias, I don't play canon characters often. I do like a handful of canon settings, but I tend to approach for them instead of being approached. I go for a range between light hearted romps to nitty gritty content to very, very not safe for work behavior. And I can transition into any of them fairly well, so ideally we're all 18+ and cozy with that. Once in a while I go for groups, but I've found 1x1s and tighter knit ideas are more reliable. I especially prefer good chat surrounding the actual play. Though I can be picky on ideas, I tend to be pretty open with them and more picky if I feel the chemistry is there.

Otherwise I just lurk and stop in every so often, so there you go. You naughty snoop.

In Suggestion: Forum Subscriptions → 6 mos ago Forum: Suggestions/Problems
I wouldn't have use for this but if the OP has a scenario for it, I won't tell him how to use the forum. It's a reasonable request. It's just that there is no activity at all on the 'would be nice' backlog from what I can see. Thus, the idea is unfortunately moot because even higher priority things probably won't happen either anytime soon. Maybe if we have the return of Mahz or something else changes to make progress, the idea can be revisited among other things.
In Friendships → 7 mos ago Forum: Roleplaying Discussion
In a manner of speaking, yes. Bright stars make you overlook a dark sky.
In Persistent world suggestion... → 7 mos ago Forum: Suggestions/Problems
Can't hurt to start a thread to make a pilot scenario, and try to expand it from there. I think making a serialized roleplay is far more realistic than a full on 'persistent world' even with some interlinked threads though. If anything I think a dedicated discord server to a setting would be more feasible.
In Pointless Thread, Do not post. → 8 mos ago Forum: Spam Forum
Oops.
In Ban the Person above you → 8 mos ago Forum: Spam Forum
Banned for being sig-free.
In Tales of Death and Glory → 1 yr ago Forum: Casual Interest Checks
We will be watching your progress with great interest >.>