STATUS: i was annoyed by it sayin i have no status, i have TONS of status, so here's a status. 6 mos ago 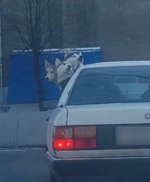 6 mos ago
Current i was annoyed by it sayin i have no status, i have TONS of status, so here's a status.
4 likes

Vexxith was an awful place and he longed for the day when he could get off of it, but that chance didn't seem likely. He was working for scraps at a time, and could hardly stay afloat, let alone afford any ship at all, much less one with a hyperdrive of some sort. To make matter worse even if he somehow managed to snag one, he had little to no flying experience, the only type of vehicle he knew how to drive was but a simple land zoomer. So here he was stuck, getting drunk in a dumpster heap with only starry eyed visions of ever leaving.

He kept to himself in a corner booth in the back of the bar, hoping to be undisturbed by the filth that inherited this place, he couldn't afford to land himself into any trouble and didn't want any for that matter. Not that he could judge any of the inhabitants of this planet for their actions, they were just doing what they had to do here, in order to make it another day. Just like anybody else, the methods may of been very different but yet they were quite the same in ways. Xavier never really noticed Jill as she ordered ale as he was half drunk at this point and unobservant.
In The Abyss of the Galaxy. → 5 mos ago Forum: Casual Roleplay
Well it seems the guy who I was roleplaying with is possibly gone now but I'd still like to do this. So if anyone else wants to join in, let me know, guess I could cancel out what happened prior and start at the first post since it was only a reply or two.
In Is there anyone willing to avoid 18+ content? → 5 mos ago Forum: 1x1 Interest Checks
I'd be willing to do something Star Wars related with you... sound's fun!
In The Abyss of the Galaxy. → 6 mos ago Forum: Casual Roleplay
Voze was tired of all this waiting and he was just about to leave as soon as he caught his breath, only a couple more minutes now and he'd start running for it. He just wanted to make sure the area was clear of all those police bots flying about, they were crafty things sending those out, but Voze thought it easy to outwit low life police A.I. However he didn't wanna run into any of there scanners or they'd come down on him in a split second, so he waited, just a little longer. After all it never hurt to be a little safe did it? Little did he know how wrong he he was.

Spotting the craft land on the building adjacent, Voze was planning on making a quick slip, but it was much too late as about five seconds later he spotted Gator hop right down infront of him. If you could see his face through his helmet visor, you'd see a clear frown, knowing he was in a heap of trouble. Then he heard his offer, Take me in or take half of my earnings? Who does he think he is? Voze thought his head tilting towards Gator. Voze scanned the area around, desperate to find any way around the situation at hand, half wasn't much to him, but he owed money, lot's of money to someone much scarier then the man in front of him. Yet, space prison would set him back all the way, and the prisons around these parts were nowhere Voze wanted to set foot in.

"You see that offer is a tempting one... and I'd be happy to take you up on it, yet... there's one problem, I need the Eon's, it's not for myself, let's just say it's for someone who'd have you and me both gutted before we could blink." Voze exclaimed, eyeing Gator through his black helmet visor.

"The situation I am in, it's one that's bigger then me and you, or any of the local idiot brigade that your working for, so I'd be happy if you let this one slide..."