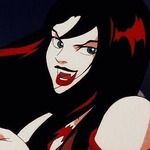 The only "rules" I have is please be 18+. We can discuss whether we will have smut in our roleplay, if you're not comfortable with it that's fine, but I still prefer my writing buddies to be adults, seeing as I'm in my early twenties! Also, please be able to match my post length or at least give me a paragraph per response. Anything shorter, like 3 sentences will have me losing interest quickly. (This doesn't apply for heavy dialogue scenes.) And please have good grammar!

Now on to the plots... You should also know that I am not an expert on Witcher lore. I've played the third game and watched the TV show and I'm just here to have fun. I don't want to roleplay with anyone whose going to be standoffish, a jerk or a know it all. My plot ideas are most likely not going to be accurate because I like taking my favorite characters and putting them in different situations and settings than they'd normally be found.

PLOT 1: A younger Geralt is tasked to save the King of Redania's wife who has been cursed and transformed into a Striga. After Geralt saves her, the king still isn't very thankful and tosses him far less coin than they agreed upon and to make up for it, the king offers Geralt the Law of Surprise. Annoyed, Geralt lives once the soldiers start to pull their swords on him, but not even the next day it is found out the queen is pregnant with their first daughter. The king isn't too thrilled but doesn't care as he already has two older sons. Destiny constantly draws these two back together once the girl gets a bit older. Geralt finds himself returning to Redania often to check on her, even though he has no interest in actually taking her with him. Because of this, the king, who doesn't care much for having a daughter, ends up selling her to Aretuza, where she actually learns to control magic. Back in Redania, no one is permitted to tell Geralt where she has been sent.

PLOT 2: Geralt is somehow persuaded into taking up the job of a bodyguard for a young princess. She is plagued with something and her father and mother believe it to be a curse of some sort and they fear something is coming after her. It takes much longer than Geralt thought it would to get to the bottom of the issue, but once they do and the princess is returned to a healthy state, he comes to find out he has grown attached to her, because once it is time for him to leave he feels like he can't. This ends up making the king and queen furious and this roleplay would take on a forbidden love theme.

Also, if you are willing to roleplay Geralt for me and need someone to play a male character for you, feel free to ask me! I may be willing depending on who it is! ​

In Hi there! :) → 3 mos ago Forum: Introduce Yourself
Hey, guys! My name is Dezzy. I'm pretty awkward with introductions, so I'm going to keep this pretty short. I've been roleplaying since I was about eleven and am currently in my early twenties! I love one-on-one roleplaying and prefer to roleplay around fandoms, usually OC x Canon style. Other than roleplaying, I love to draw and play video games.