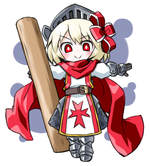 As if lost, the girl looked around the shrine. Her ears and tails sprang up as she locked eyes with a girl, snow white in hair and sapphire in gaze, also surprised by her sudden appearance. The kitsune walked over to her slowly, the same slightly startled expression persisting for a little while.

"Excuse me, but is every one of us here lost?" the girl inquired, twitching her right ear lightly. "I... was just taking my stroll, you see."

At the same time, she began to sniff as if noticing that the girl in front of her had a little tinge of cat in her scent.

While all this was happening, one of the three warriors that appeared in the fighting was overrun by the skeletons. Those that hounded him suddenly returned to their business, and the warrior was gone-- vanished into thin air. Some of the skeletons, both lightly wounded and severely disfigured, suddenly had their damages fade away into nothingness and return back to whole.
In Pakora Academy [A magical school RP] [CLOSED] → 3 yrs ago Forum: Casual Roleplay
She's cured.

Now where to start here...? There's the screwed squad of nonskeletons trying to unscrew themselves, and there's the squad of skeletons with their giant Gashadokuro leader trying to screw the other team. Rumi could try to play a trick on the skeletons, but she doubted she would be able to deal with them with only a dagger at hand when pursued. Rumi could also try it out on the fleshy beings at the shrine, but, well... same problem. There's a few youkai among them, made obvious by a few people at the scene.

All at once, three mysterious warriors jumped in sight outside the shrine, and began furiously attacking the skeletal legion. The skeletons' bodies appeared to wear down, and a few looked like they shouldn't be able to walk anymore, but... why are they still alive?

Around the same time, a mysterious girl, bearing the resemblance of the customer claiming to have been deceived by a takoyaki vendor, entered the shrine. Only this time, she had three tails and two foxy ears...

"Apologies for intruding~." the girl greeted and bowed, stepping onto the wooden floors. "Anyone here?"
In Imaginary District: An Urban Fantasy RP reboot → 3 yrs ago Forum: Casual Roleplay
Run, or fly. Fly, or run. Would it be safe to fly while carrying a little child? Or would they rather run around by foot?

Nah, fuck running, thought Suzuka as she recalled the girl's cheery "I wish I could fly!" earlier. The tennin quickly lifted grabbed Sayuri into a princess-carry, and she was quick to rocket out of the scene. Never mind that Sayuri gets second thoughts, but Suzuka better get this done quick and without hassle.

Suzuka and Sayuri floated high in the air, and a little up ahead was the place where the lost child station was. The giant teddy bear was fortunately a little far from where they are and where they were going, but they're probably dead if it breaks free and chases them first.
In Boundary's Edge -- An Urban Fantasy RP → 3 yrs ago Forum: Casual Roleplay
She's going to get in, anyway.

Wolves are ancestors of dogs, right?
In Pakora Academy [A magical school RP] [CLOSED] → 3 yrs ago Forum: Casual Roleplay
zzZ
In Boundary's Edge -- An Urban Fantasy RP → 3 yrs ago Forum: Casual Roleplay
Today, a typical high school girl and one of the many typical shrinegoers today, was hungry. In fact, as soon as she heard the howling of an old man from his takoyaki stall and the ringing of his chimes, the girl was quick to rush in and be his first customer for the day. The stall looked freshly set up, and the takoyaki on display presented itself palatably.

Without further ado, the girl quickly handed out a 500 yen coin for 3 takoyaki, priced at 100 yen. The old man handed out a 400 yen change through 4 100 yen coins, and the girl left to enjoy the sumptuous taste of her snack.

Finishing her meal, the girl peeked at her wallet to figure the amount of donations she would give today, only to find out the old man hadn't given her 400 yen. He gave her 4 yen.

Outraged, the girl quickly hurried back to where the stall was, but alas, the old man and his cart was gone.

At least the takoyaki was worth it.

496 yen-- swindled! Just one of the many jackpots Rumi Amano's luck leads her to. The foxgirl, strolling behind the bushes, took another bite from one of her takoyaki in her bag, actually a buy from a stall somewhere else in the festival markets.

It sure was a busy day. Now was a good time to take a nap. The drowsy kitsune laid herself to sleep at the bushes just beside the shrine, a place rarely tread upon by visitors.

Rumi woke up later to an odd noise not far from where she was. The red skies, however, immediately caught her sight before she could catch wind of where the sounds were coming from. Though definitely an unnerving sight, the fox girl oddly found herself comfortable with the environs, and she had laid for a little while to enjoy the view before she could actually proceed to the source of the noise.

A giant skeleton and a bunch of kids were having a ruckus.

"What the goddamn!? Can't a lady take her beauty nap in peace here!?"