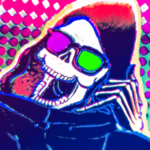 1 mo ago
Current brother
3 likes
2 mos ago
if only we could all be anime girls 😔
6 likes
3 yrs ago
The knights were the only good thing to come out of TLK.
1 like
3 yrs ago
Cold nugs are proof of evil in this world.
3 likes
3 yrs ago
youtu.be/GLg_wp0IXoI

dont look i need to rewrite this

I live on the United States' west coast, specifically in the Pacific Standard timezone. If you live anywhere other than Alaska or Hawaii or parts of Canada you're basically from the future. I can handle staying up late but my days tend to be busy. I check the site multiple times a day whenever available.

Contact info
spooky senpai#2269 on discord! please let me know who you are if you message me

Tension locked up Gabi's jaw as Will made his way down the stairs. Though she didn't immediately jump onto the "shit's haunted" train of thought, she was clearly uncomfortable as the exchanges went on and Will got further down the stairs. She didn't really know him that well, aside from snippets of overheard gossip. Some of the typical things she'd picked up on - Will's reputation, the near-encyclopedic critter knowledge he apparently had, that type of stuff - and while she was admittedly a bit of a believer in certain things, she was more than anything just anxious about the very real, very mundane possibility that she was about to witness the designated weird kid make a fool of himself in front of some apparently less-than-amused bystanders. Her heartbeat quickened a little just imagining that, and she mumbled uncomfortably as she pictured what she thought would be the scene-to-be.

Curious as she might've otherwise been about the basement, she more just hoped Will wouldn't get ribbed too hard for putting on a weird show. She'd been in similar straits during some past episodes, and it never felt good afterward. The odd mix of hindsight, embarrassment, and being judged was enough to make someone just want to die, she thought. Will didn't deserve to go through that.

Perhaps fortunately, he broke both her concentration and the tension Gabi had been putting herself through when he came running back, yelling for everyone. She jumped and yelped, slapping her palm over her mouth in a vain attempt to catch the noise. "Shit!" She hissed, feeling something drop in her gut when she noticed how instantly haggard he looked. She didn't resist being guided into the basement, maybe against better judgement, but she gave Will a look of sympathetic concern when she passed by him.

The dim flicker of the buzzing light instantly made her recoil. Something about dim lighting freaked her out. It was enough to see, but just dark enough to make shadows deeper and messier. She caught herself staring at particularly dark spots around the group, half-expecting something to come and ruin their day. All the while Will talked about his discoveries, she kept watch, but she turned her head to look at him intently when he showed them the page and recounted his experience.

"...It ain't exactly the same, but I've been trying to go visit my grandpa in Portland for like, a month now. Every time we try to get out and go see him, something fucks up," She added, glancing towards Amira. It definitely seemed like her experience was closer to Gabi's, compared to Will's. "We haven't even been able to make it as far as city limits before it happens. Just today our car's engine just started farting out a bunch of smoke, and it's kinda old, but the timing's been really weird, you know?" It sounded less convincing the more she thought about it. Were car troubles really cause for concern about something supernatural? Even if Amira's plans were falling out too, did that mean there were definitely ghosts? She couldn't say yes to either. Even Will seemingly warping might've just been either a delusion or a lapse in memory, but she wasn't so sure about that either. He looked legitimately freaked in ways that were hard as hell to fake.

Finding herself stylishly late to the budding scene, Gabi furrowed her brow a bit when she saw just how many kids were heading into the old library. Sure, it wasn't weird for a library to be busy, but to attract so much attention so soon after the quarantine lifted? Shit, man, those late fees must've been brutal. She deftly avoided the pillars holding up the second floor balcony, slowing her bike down to a crawl once on the porch. Her first target was a bike rack that had been pretty haphazardly bolted into the floor near the main entrance. Gabi didn't have any books to return or DVDs to rent, and by all means could've just plopped on one of the seats and mooched the Wi-Fi from there, but part of her was curious. Maybe there had been some event announced at the library that she'd just happened to miss? Definitely worth checking, she thought. Not like there was much better to do if her call still wouldn't go through here.

Gabi secured her bike to the rack, nestling the front tire between two metal bars just barely wide enough to accommodate it. Her lock was a pretty cheap, number-locked belt that wouldn't stand up to a good pocket knife, but she felt better looping it through the wheel to keep it at least somewhat more secure than just dumping it out front. She doubted anyone would really want to steal her bike, given it was a bit schlubby, what with its flaking paint and function-over-form design. But damn if she really didn't want to lose it. It was hers.

Her cycle now "secured," Gabi let herself in and immediately plucked her phone from her pocket. Cracked lens and slightly scuffed screen protector aside, the thing worked as well as a phone a few generations behind could in the era of designed obsolescence. A spike of lag hit as it searched for open signals to connect to. Most of them were locked, naturally - a connection for library guests, one for the staff, some would-be comedian's poorly-named hotspot - but her card let her sign in to the first one. "Alright, alright, let's go," she mumbled to herself, watching the connection struggle to form. Just when it seemed like it was about to work, though, a sudden wave of cold hit her.

It was like someone had dumped an ice cube down the back of her shirt, and she uncomfortably squirmed in turn. "The fuck?" She asked, mostly to herself. A quick spin around proved nobody had actually been behind her to do anything of the sort. She knew the place had
pretty shitty airflow, but something like that was far too distinct to merely be the AC being wonky. Her eyes narrowed and her brow furrowed uncomfortably. "So, uh," She spoke aloud, a bit more directly to the others. "Y'all feel that too, or..?" The atmosphere of the room already seemed disquieted. One of the kids - Will, she thought? - seemed to have already gone into full on white-guy-in-a-horror-movie mode, going down the needlessly creepy staircase on the other end of the room.

How are you eating cereal if it gets on your keyboard >.>