In 7th Heaven - A Tavern Roleplay → 5 mos ago Forum: Free Roleplay
The Lucky Day's lights flickered and went offline, just to be replaced by a blearing alarm and flashing blue light as the emergency life support systems went online. Cpt. Krin Bonsu looked wearely at the console infront of him and then at this XO. "How are our shields doing?" "Failing across the board, sir. We-" the ship shook again after being hit by a railgun dart moving at 25% of the speed of light "-We can't take more hits like that." "Pindar how much longer until the jumpdrive can get us out of here?" "Too long." Bonsu glared at the young officer "5 minutes, Sir." "That's too long." No shit Pindar thought to him slefe.
Bonsu's mind raced.
Was ist too late to apologuise to the Hundar for blowing up a destroyer after it "accedentally rammed" Yea right he thought to himself, the shipyard over Kobamu? So surrendering ist out of the picture. What if they were to divert power from the Shield generators to the jump drive? It would likely blow under the strain of the exess power being funneled into it. But it was worth a try.
"XO what is the Ship's status?" "Shields are failing, the point defense masers can barely keep up with the incoming missiles and the starboard side hangar is still on fire." "Still? I thought we had some people taking care of that?" "The latest impact sealed off that part of the ship." "How many people are in these sections?" The holo map showing a tactical view of the battle switched to show a diagramm of the ship wit sections around the fire highligted. "26 alive with 9 more dead. Sir, don't tell me-" "Seal off these sections open all doors facing space and vent that entire part of the ship." "Sir? You can't be serious." "If we don't act fast we all are going to be dead." "Yes Sir" the XO murmered begrudgingly "You heard the man."
Attemting to jump right now besides the power issue is also nearely impossible due to the gravity well of the planet Kobamu. "Pindar!" The officers head turned werely of what ever idea Bonsu had cooked up now. "Would diverting all pover from the masergun excitors, targeting computers and shields be enough to form a jumphole?" "Sir, with all due respect, I strongly advise against jumping within the grav-" "Yes, yes skip it, can we yes or no?" "Yes Sir, it CAN be done." "Wonderfull! Jump when ready." "Yes Sir."
Heads turned towards Cpt. Bonsu, some more or less freaked out thier eyes twitching and mandibles darting instinctively into every direction possible looking for a scent leading home. Away from danger. But in the vast emptyness there is no smell so the crew did their best to follow commands and soon after but not quite soon enough Pindar raised his voice "Get ready to jump in j-5... j-4... j-3... j-2... jumping." The main bridge display went dark Bonsu felt a strange sensation and blacked out.
Wind, rushing of air, suddenly Bonsu was wede awake rushing towards the ground. Around him a vast nothingness and below green plantgrowth and a building. The closer he got the better of a view he got. The roof had a hole now patched and below him he could see a creature vanish inside then as if by intervention by the devine mother herself he hoverd inches above the grass unharmed. Slowely he tuched the ground with one of his 6 legs and after testing the ground stepped on it completely.

"Strange... where am I?" after looking around for a bit the only discernable objects in view are the Building with an unknown skript above the entrance, a cart drawn by strange.. animals he guessed and tears in space similar in apperance to jump wormholes generated by the frigatte he commands. Figuring it to be the only place to go he followed the lead of the creature befor him and entered the building. Smells of meats and alcohol filld his nostrils. He saw a green skinned creature saysomething and after analysing the speach with help of a handheld computer he could discern "...circle misfired? Wrong turn at the Eternity Gate? Poorly worded Wish spell?"
He looked around, spotted a two legged creature at the bar and decided to go up to it looking for something to clear his mind.
In 7th Heaven - A Tavern Roleplay → 5 mos ago Forum: Free Roleplay 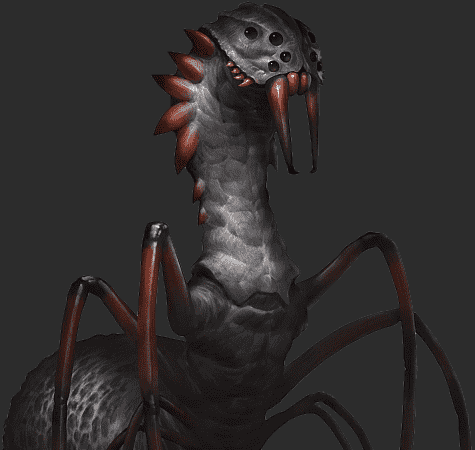 Personality Type: Quick to jump to conclusions and eager to act, the captain of the Frigatte "Lucky Day" is the definition of a knucklehead. Family is not a big priority as the vast distanceses of empty cold space and the shere number of his siblings don't suit forming bonds with those not serving under his command or in his taskforce "Expeditionary Squadron 41".

Skills and Weaknesses: Cpt. Bonsu is quick to act often endangering his crew and entire taskforce, drawing the anger of his supirior in command during basically every mission. On the other Hand his Insight in enemy tactics and the ability of seemingly pulling good ideas out of his ass at the right time saved many lives before leading to him remaining in command neither rising nor falling in his rank.
In Greetings! → 5 mos ago Forum: Introduce Yourself
So this is a thing I did... finally (i hope ;) ). Well the template states...
Roleplaying Carrer? Well I been DM ing a DnD 5e Game at my lokal youth centre for a year now.
Other than that I like RPG games but never considered to take up Role Playing on Forums.
After going through quite a few... well roleplaying (there are some lewd people out there)
forums I finally ended up here and after looking though some games I am excited to get started.

OK... Carrer done... what else... what else... preferences, Right
I like my women smart funny, an equal.
Taking care of your body by exercising eating healthy (snacking is obviously fine we are just humans afterall)
is nice but not requi... oh my roleplaying preferences. Um my safeword is "... no that's also not meant.
OK fine I don't really know yet. In my dnd game it's a constant quick back and
forth but I never really tried the rest so I am open for anything.

Hobbys...
Those gosh darn Vidjagames, not only playing but also coding.
If you asked me a year ago I would have stared at you with disbeleve, working out.
Playing DnD.
Reading if I find the time, though audible is a sort of subsitution for me. :)
Watching movies, shows things I recently finished are The Big Bang Theory, She Ra and the princesses of power,
The Mandelorian, Chilling Adventures of Sabrina, The Witcher,
Crazy Rich Asians and many more.

So if you all wanna deal with some German Dude loking to write storys and laugh with then I'd be happy to join you.
© 2007-2017
BBCode Cheatsheet