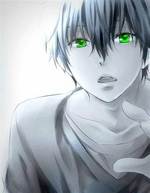 In Fated Mates [A yaoi, Vampire and Werewolf RP +18, A War between races] → 6 mos ago Forum: Advanced Roleplay
Civilization was destroyed by Vampires when humans began polluting and hurting the earth, before any real damage could be done. The supernatural creatures came together and made deals to keep the human population flowing and the life on earth sustained; Humans would be protected by their rulers as long as they follow their laws and give blood regularly. Cities were destroyed and rebuilt to suit the Species that ruled there.
For the vampires, they set up several blood banks and high walls to keep any unwanted visitors out. Vampires were known long before the change that they were enemies of Werewolves, creatures that hunt for their prey and become feral beasts in the moonlight. That war followed them from the shadows and terrorized humans if they happen to be in the middle of this ongoing war.

In a city known as Blood City or Orașul de sânge is ruled by the most royal blood in the Vampire tree, purebloods. [Y/N] is the prince and will become the next Lord when he has found him mate, unfortunately. Whenever [Y/N]'s father summons a princess. None are taken and they are all sent home. With war rising in the East where Harpies reported to see four packs ambushed a blood truck. shortening their supply on blood [Y/N]'s father and mother left a week ago to go help with this rising issue and aid in the fight that was to come.

-----------
Near the city was a vast forest that was homed to many animals and plants, this is where the Werewolves roam and live. Werewolves have different customs and traditions in comparison to other creatures, they have set rules every pack must follow and if they are broken. That wolf his hunted and cast out of the forests to survive out in the open and have a higher chance of being killed or tortured by Vampires.
Werewolves in this region have been trying to find ways of take over the Blood City, but they have high security and gates made of pure silver.
------------

During the day, while the sun was still high in the sky. A werewolf was caught, a runt to be more specific. He had gotten up to the second story to the mansion in which all rulers live in, they were massively built to be the first thing people see. So they know, they were always being watched. The runt was placed in the farthest cell in the dungeon that was underneath the mansion. The prince would decide the runts fate to be enslaved, put to work as a spy or be a guard dog. There could be more in store for the runt.

So, this is kinda where you guys start off. Ichiru (Me) is a runt who stands at 5'3. Here werewolves have a tail and wolf-like ears on their heads and usually stand at least 6'0 and rely on their strength rather than speed, unless in wolf form. Which they can change at will unless they see the moon while it's full. Ichiru is a tan male with black hair, along with a matching pair of ears and tail. Since he was born a runt, he had to struggle with everything in his life. Since Werewolves have a strict rule of killing in the same packs, they told Ichiru to go and try to get into the City, to do the impossible, kill the rulers.

This was a simple way of getting rid of Ichiru without having any bad blood on their hands in the pack. The only one who seems to care about Ichiru in the pack is his mother.

Era Setting;
Now, the setting is modern times. But, when the Vampires destroyed civilization, they got rid of anything that would harm the Earth. It's their home too, they are smarter then humans because of their long-life and immortality. So cars do not exist and same with phones, planes, electricity. Everything was basically put beck in time towards the medieval with the torches and yes, there are Dragons.

Character's You can be;

Ichiru's Mate the Vampire Prince;
(2 or more) Guards;
Vampire royals;
Werewolf Alpha(This is Ichiru's Father, he is considered the bad guy);
Ichiru's Mother;
Ichiru's siblings(x3);
The Prince's father;
The prince's Mother;
Anything you want, but it must be human or a supernatural creature.

The last one, there is no limit.

This is supposed to be a big long-term rp. Please DM me if you wish to know more info and if any of the spots are taken.
In My Introduction; Hi! → 6 mos ago Forum: Introduce Yourself
Hi, I'm Ichiru admin. I have been on the search for new sites to role-play on I ran into this and look forward to making friends and seeing how awesome people are on here. I have role-played for as long as I can remember, though when I was younger it was more like playing pretend. I started online role-play thanks to family and never stopped. Role-play has helped me with a lot of things. But it's a fun way for me to make friends.

Recently I made a OC named Ichiru Sakimoto, a werewolf in a ongoing war with the vampires and other supernatural creatures. Fate had seen enough of the war and made a Vampire Prince of a city and a runt of a cruel werewolf pack, mates. Anyways. I've worked really hard on this character and the lore. So I'm excited to see what people think and what the outcome of this rp goes.

As you can tell, I role-play the supernatural genre, I find them interesting and I absolutely love werewolves. Here are a few others you may find me role-playing; fantasy, apocalyptic type rps, War between two or more races, horror, hurt/comfort and loads more.

Thank you for reading, this intro may be a bit all over the place. I'm just excited.
-Ichiru Admin
© 2007-2017
BBCode Cheatsheet