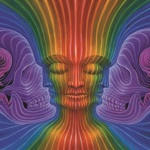 No sense of time.

Brynan dropped her scimitars to the ground with a clatter. She stumbled back a few feet, her eyes lifted to the cloudy night sky. It was with extreme care that she kept her eyes there, lifted high and safely away from the filth that covered her body; filth she would not think about. No. That was a bad idea. Better not do that.

Her mind was sluggish. So was the rest of her, really. The rage subsided quickly and left with it a dull ache all over and, even worse, a fatigue that felt like death was breathing down her neck.

She swallowed past the dryness in her mouth.

With jerky, deliberate steps - lacking any of the grace with which she usually moved - she made her way off the road and towards a line of nearby trees. There, she bent over double and loudly threw up the entire contents of her stomach. It was violent but quick, and once the vile - don't think about it - substance was out of her she felt somewhat better. Eventually she stood up and wiped her mouth with the back of her hand. It only spread the filth around and for a moment her stomach heaved again, but she rallied and pushed forward. Rejoining the rest of the party, she was met by Stur.

Surprised by his offer, she gratefully took the waterskin.

"Let's ... not do that again," she said, then raised it to her lips and drank deeply. A remote part of her mind knew it was wine, bitter and cheap, but to her it was the most refreshing, delicious thing she had ever tasted. She stopped and looked at Stur, then added; "I doubt you'll want this back."

Then, quite suddenly, she sat down where she stood. Her legs, she found, refused to hold her any longer. A rest - that was all she needed. A rest and a bath.

"Is anyone hurt?" she asked. "Where's that coward, Nathaniel?"

Having sliced deeply into the trolls legs, Brynan came to a sliding stop in the mud, her lips pulled back in a grimace of grim satisfaction. She watched as it buckled, trying to regain its balance, only to have one of his legs cut out from underneath it by another blade - that of the sodden stranger.

"Beautiful, woman!" she cried out. But she didn't pause to celebrate. The fight was far from over. She adjusted her grip on the scimitars and tensed her body in preparation for another attack.

Aiming to slice at its throat, she looked up at the troll just in time to catch a face full of loogie. It covered one of her eyes, entered her parted lips and slid easily down her throat. White-hot pain immediately accompanied it, but Brynan cared little; all she felt was disgust. A primal scream tore from her burning throat and she launched herself at the diseased creature, both blade tips pointed at its distended belly. She would run it through.

Plot
━━━━━━∘☽༓☾∘━━━━━━
This is a test.

test
Setting
━━━━━━∘☽༓☾∘━━━━━━
This is a test.

Characters
━━━━━━∘☽༓☾∘━━━━━━
This is a test. Blah blah.

Appearance: One paragraph minimum. A thorough description of their physical appearance, including details such as height, eye colour and any distinguishing marks such as scars or tattoos.

Spells: (Limited to 3. Wizards Only)

Lore
━━━━━━∘☽༓☾∘━━━━━━
This is a test.

OOC
━━━━━━∘☽༓☾∘━━━━━━
This is a test.

Rules
━━━━━━∘☽༓☾∘━━━━━━
This is a test.
In Annulus: Darkness Rising → 8 mos ago Forum: Casual Roleplay
Apologies, I'm going to have to drop out.
In Ask an Admin, v2. → 8 mos ago Forum: News
Hi team! Have you guys ever noticed how the hr line goes ahead and shows up even though you wrap it in the code tags? Rude.

I got around it by writing it like [hr ] but it's kind of annoying when you give your players a character sheet template with loads of line breaks. Most people aren't code savvy and it tends to break.