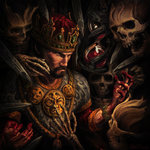 Epithet(s): Exarch of the Golden Flame, Consul of the Four Hellish Gates, Villain, Oppressor of the Conscious World, The Obsidian Reach, Dunenia, The Fist that Moves Realms, Hellyfino’s fabled Conqueror, Black Cross Brigade Slayer, Master of Rebirth, Eighth God-Knight of the Nexus Order, Paragon of Hellfire
Height: Five feet seven inches [ 5’7” ]
Weight: One hundred eighty seven pounds [ 187lbs., fluctuating ]
• Build: Immaculate. Ectomorphic
Age: 500+
Gender: Male
Hair: Tamed, straightened to near perfection. Blond, styled short with the back shaven entirely, leaving the rest to drape over neatly like an umbrella
Eye color: Piercingly blue
Blood type: ?
Homage:
Indifference
Chikyu No Mon
Class: Prince of Warriors. A master of numerous fighting styles and martial arts. His fists are his greatest weapon, but Hyojin is more than capable of utilizing handheld weaponry with tremendous accuracy and efficiency. His mind is so ridiculously complex—with the skill to back it, of course—that even a pebble can be used to disassemble enemies in a fell swoop. He is a product of power, a beast of war; and because of that, his body is only an extension of his combative prowess.
Subclass: Master Spearman. Whether on horseback as a dragoon, or simply spear throwing, Hyojin is an expert of the spear. There isn’t an art in the aforementioned that he isn’t well versed in. He isn’t just a master of the spear, but with all polearms. His reach and muscle structure is perfectly attuned for it.

Disposition: Poised. His personality, the way he speaks—it's all very articulate and respectful. It's almost maniacal how much his true intentions and goals are so heavily obscured. His speech patterns suggest benevolence, using phrases like 'fret not' and 'too cumbersome' to invite an air of familiarity and calmness. His voice is remedial; soft, with a hint of Japanese imbued. In folklore centered around him, his voice is known to quell volcanoes and calm raging seas. The way he presents himself is composed, mature—even during battle. He constantly refers to battle as a 'dance', but never as a 'fight'.

With his combined height and weight, the fact that his punch is so ridiculously packed frightens most and shocks others. Visually, he looks nothing more than a child, but his biological matrix is much more complicated than that. While almost completely indiscernible from humans, the biological composition of the Ryuusei Clan varies based on pure bloodlines and history. In terms of strength, speed, and traits pertaining; they’re fathomless and savage. This is reflected heavily in the type of attacks he uses, but their executions are heavily based off of proper stance and textbook deliverance.

His motives are simple. He's an extremist who believes in subjugation in order to restore order and balance to worlds shrouded in anarchy. His benevolence is often on display, but only as a ploy—he thrives off of embedding himself and tearing worlds from the inside out with his bare hands. He's always retaining this calm, nonchalant demeanor regardless.

In Name Change → 1 yr ago Forum: Suggestions/Problems
I'd like to change my name to Marcel. Thank you in advance.
© 2007-2017
BBCode Cheatsheet