Knight of the Sangreal 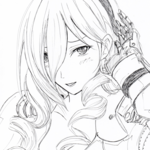 I run things from time to time, and exclusively write smut.

Maybe we can do something.

"I am Soaring Sunrise, master over the Sky Fist Sect!" said him, the oh-so-loud young man of a fearsome visage. "And in this, I say we speak as one!" His fellow sect-leaders would agree, "Your attempts to tame us are laughable, queen! If you defeat us in the tournament, we shall be there! And if not, then I laugh at you, for your city will be ours, as it already is!"

Soaring Sunrise turned away, leaving through a hole in the wall, his sect following. One by one these little gangsters left the field of battle. The only one that remained is Unfettered Serpent, with no small uncertainty. As many before her, she suddenly turns dour and timid when her fellows have left her. Words were stuck in her throat, words that Iko, the Blade that Sings, ached to spill forth.

Bloodily, if you catch my meaning. It was well known, I say, that she's rather short on patience, particularly for disrespect.
In [Exalted] A Story of Time → 1 yr ago Forum: 1x1 Roleplay
Les... boissons? What manner of word was that, wondered Unfettered Serpent. The young girl's eyes were narrowed, much like a serpent poised to strike, but ah, a fool she'd be if she dared strike the Empress now, no? Ha! The strike was one of doubt, and deep down, is there any blow worse than doubt?

By what right did a foreigner rule this city? The side of this outsider she took, for Serpent herself was one, and that uncomfortable truth dawned on her as she gazed back to her own crowd. Once fiery, the girl now was sullen, in a manner much reminiscent of a certain lad. Lad? No, man now.

"Hahaha! I sup... with nobody! Speak your condition, o' empress, not to me, but to us all. In the world of martials art, jianghu, we are all equal." All on his side agreed over these wise words, their spirit renewed; for they were a brotherhood that surpassed blood and lineage. This was a brotherhood of ability!
In GM Looking For Player (FxF/Smutty/Multi Character) → 2 yrs ago Forum: 1x1 Interest Checks
Nice.
In [Exalted] A Story of Time → 2 yrs ago Forum: 1x1 Roleplay
That was an offer not lightly given.

For the White Queen, Alexsasha of Ascension, daughter of the Sun At His Zenith is no lesser in the arts of warfare. Like a puissant painter, like a calligrapher drawing beautiful curves in black, she made of war her gift.

Yet... in Ascension, one's ancestors were a person's letter of introduction, a measure of their worth. The way of Lucille's warrior-ancestors, although known to us... is foreign to them. Alas, one of the girls was valiant, and dared into the unknown. "I'll take you up in that!" said her, and none else.

In the back of the chamber, one man laughed. "Does the Alexsasha know finesse in combat, however? It is said you fight with a blade most uncouth, but what about your body? Can that be turned into a weapon, asks I? Steel is not the way of our great Schools! Take her, good queen, take Unfettered Serpent, train her, and we'll see how much she measures up to our apprentices!"

"In the Descending Wood Tournament!"
In [Exalted] A Story of Time → 2 yrs ago Forum: 1x1 Roleplay
Thus quoth the queen, and thus did the youth of her country snarl at her. "Yet, it is widely known that an army under your banner can live weeks on nothing but air!" It seemed like he would speak more, for his mouth lingered open like a taut bow drawn. The arrow he was going to fire, metaphorically, was stolen from him.

"It is that you fear battle, o' queen," said the fiery girl, "for you have lost your edge."

A silence fell upon the chamber like a blanket. An itchy one, doubtlessly you know the type. The redheaded Airfolk's gaze was strong, brave, not unlike the Zenith's own. Her arms were crossed, tensed against her chest. Chin high, brow furrowed in that silent dare, spoken only between warriors.

"Should I..." began Iko, her words nearly a whisper, "uh, you know, strike her down for impertinence?"
In Post a random fact about yourself. → 2 yrs ago Forum: Spam Forum
I'm really goddamn nervous right now.
In H-hullo... → 2 yrs ago Forum: Introduce Yourself
Hello, hello, hi, hi, hi.
In [Exalted] A Story of Time → 2 yrs ago Forum: 1x1 Roleplay
"The way we act," spoke the fiery redhead, whose foe had been bested. The boy leapt to his feet, harmed, yet resolute in his stare. Was that stone or iron in his eyes? "is our regard for those lives lost! What is our battle, if not a celebration to the dead?" He was black haired, with a silky mane that reached his waist, tied up in a neat silver bun, eyes narrow, and brows that were like a form of art.

Valiant were their words in the shade of danger. The retinue that had come with the Empress were none other than her own bodyguards, those hand-picked chosen. War paints scarred their hauberks and masks, brilliant plumes of seven-colored feathers. One of them was a known face to us, but why not introduce her again? I speak of Iko, the Silver Sword, whose iajutsu was like a blur. No person had ever stopped her strikes. Alone, her green jade armor made her seem bulkier than she was, her near-innocent visage hidden beneath a menacing war-mask. Her presence alone seemed to hush the martial artists here gathered, like a gust will silence a fire.

She spoke no words, and needed none. The severe straits of these youthful gangster was evident. Some cowered, but not these two stars, that rose bravely before Lucille. "This... passivity of yours, o' queen, is the root of all these issues! Lead us into battle anew! We breathe not to be farmers and tillers! Our blood demands combat!"