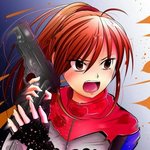 lately ive had an itch for asian folklore or at least something in the vein of it after chatting with a mate about exalted. samurai, ronin, ninja, etc. (though it doesnt just have to be japanese) all that kind of stuff but with things such as kung fu magicians (kinda like avatar i guess), deadly monsters and the like.

i dont have a specific idea in mind as to plot but maybe we could do a grand quest to save the world cliche kind of thing. with death being taboo in some asian societies maybe we can have some kind of vampiric/zombie-like curse that we need to stop before it takes over the rest of the world/country?

anyway, lemme know if any of y'all might be interested. i can write a couple paragraphs maybe once or twice a week but i try to match partner's writing ability. just no one liners. also, i don't really do smutty things. romance is fine though, but i'll be playing female. if you want to play either female or male that's up to you.
© 2007-2017
BBCode Cheatsheet