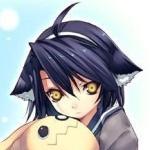 And just when the pout started forming on her face, the music changed, shifting Erinion's focus on happenings in the car. And while Alex' mask fell down for not longer than a second, she couldn't help but grin on the quite obvious hate emanating from him. Thread carefully, love. Nessa seemed quite fine though, beside the sudden mood changes, but after all, Erinion was in no place to judge that of all things. Reaching out, Eri tapped Nessa's shoulder a few times. "Don't trouble yourself, Father will show us the way."

"And the one that drives should turn right here." She added leaning back to her seat, a soft smile framing her face. Being driven around was something Erinion enjoyed, quite a bit actually. Even though she was bound to this city, she'd indulge the thoughts of driving away to the sunset - thoughts that often caused her freezer to be filled with bodies of the people she'd stumble upon after realizing that dream isn't going to come to life anytime soon. "Just right over there." Eri pointed one of her slim fingers to the side-street, hoping that would give Alex enough info on where to go.
In From the shadows [Based off Vampire the Masquerade] not accepting anymore players! → 5 yrs ago Forum: Casual Roleplay
I changed my last post a bit. Nothing major though, just put Eri in the car so we can move forward.
In From the shadows [Based off Vampire the Masquerade] not accepting anymore players! → 5 yrs ago Forum: Casual Roleplay
"Fire."
"Bad."
Eri's eyes flickered between the lighter and Tony. "I like your shiny toy." She shoot quick smile at is direction before giving her best to pay attention to the rest of the group. Fire was bad, every vampire in the city knew that. But lighters... Lighters were a completely another thing, especially if they were shiny.
It seemed like Margarita decided to make herself a leader of their merry band and even thought that probably meant she was closer to the Prince than Erinion ever wished to be, she didn't complain. The sooner they get whatever was asked of them done, the sooner she can go back to her toys and paintings.
Catching the briefest of Alex' glances, she felt something was off with him.
"..." Putting that though to be played later with, Erinion let her eyes slide over the rest of her new companions. If she got the plan right, they were to live together for a while. The idea was rather repulsive at first, why in the world would she condemn herself to closed space with a bunch of weirdos? "The Prince gets what the Prince wants, remember?"
"I could go with a bite." Eri shrugged. After all, who says no to free food? "And don't worry, children of the night. There's nothing else making noise out there." A quick shadow flew over her face as she unconsciously replied to an unasked question. "Father's not with us any more. Unless when he is." Tapping her temple a few times, a wry smile framed Erinion's face.
Presuming Dawn would like nothing more than to drive off to the dusk with Margarita, Erinion scooped over to the ass-kicker. "Good plan, lovely." If they did get into trouble before they got to wherever they were going, it would be nice to have someone like that by her side.

"I just wanted to check on it." The two exchanging words before left slightly unsettling aura in the air but Dawn seemed nice enough, so she spoke right after her leaving little to no time for anyone else to jump in. "Make sure I'll get my painting, you know. But then the hoodie came and said I have to be... here." Honesty is sometimes "Never." the best policy and all, but Erinion figured that a short sigh would suffice to display enough of her displeasure, still not knowing who was in the Prince's fan club.
"Manners lovely, were are your manners. Greet them."
"And I didn't want to swim with the fishies, I don't like fishies." She added, a soft frown still framing her face.

"The Queen of rats." Erinion stepped forward and preformed a graceful curtsey before Margarita. They were a strange bunch, made to stop what was about to happen by hiding in the darkness of a very wet, awful smelling place. But sometimes you just have to go with the flow and the best way to start is often a proper greeting.
"And Alex. Alex too." A quick salute was accompanied with a playful grin.
"One that fights, and the Daybreaker. Small vampire." Shooting a smile in their direction, Erinion pulled back to her place. "You may call me Erinion. Eri, if your tongue is troubled."
"Two, three, four, five."
"Five." She said letting her eyes glance over the Kindred before her. "Two, three, four. Five without me." Slowly counting down, Eri raised one finger after another while looking each of the vampires in the eyes. "Five against one. Five against thirty dead." Her lips stretched into a smile - there was a slight chance all of this could end up entertaining her. "And I mean dead dead. Not not dead." She chuckled softly at her explanation.

"The prince wants the Gift."
"The Jack of all trades seeks favours again."
Tilting her head ever so slightly, Erinion turned to the group. "Lady without a nose asked what do I have to offer."
"Favours that will never be repaid."
Manhunts, vampirehunts, any kind of hunts actually were never her specialty. The ones she chose ended up dead sooner or later, the only difference was did she felt like playing with them first.
"Told you, should've stayed home."
"Father speaks through all of us. When the time comes I might be able to share with you." As the sour odour lingering around the docks tickled her senses, Erinion shrugged. "Words spoken, and the ones not so much."
She let her eyes wander around the surroundings for a moment, sopping in all what was around her; the six of Kindred, the ever lingering scent of sludge twirling around them, annoying tapping of human footsteps on the docks, the dread that let her know she was bound to this task no matter the price.
"Two, three, four, five."
"Six." Erinion whispered.
In From the shadows [Based off Vampire the Masquerade] not accepting anymore players! → 5 yrs ago Forum: Casual Roleplay
Erinion sewered her connection to the Network and stood up.
"Oh no, not again."
"I have to go check it." She replied to the room behind her, slim fingers nervously tapping the perfectly clean glass table. She could feel the paranoia taking over and it was just the matter of time before she would do something silly.
"Kill it."
"Silly like going out while there's a vampire leaving a trail of bodies, you mean?"
Erinion frowned as she glanced through the high windows, the night lights softly glimmering floors below her. The view was the reason she bought this apartment in the first place; being miles above everything else helped her to clear her head a bit, she felt like she could pick and choose which human she is going to play with next.
"Exactly, and since you can have anyone you like, why go out now?"
"It's mine." She spun around to the room, frown still gracing her features. "Mine. I'm not having anyone touching my toys."
"Sure thing lovely."
"Drink it."
"All I'm saying, you can find another one. They're all yours to play with."
Erinion nodded as she strolled through the room. "Of course they are."
"Tear off its limbs and let us play."
"Stop it!" She snickered behind her back. "We're keeping it safe until it finishes the painting. You know that. I know that."
"Stay here lovely, screw the painting, screw the artista. It's safe here."
"Stay." Soft whisper in her ear almost made her change her mind. Paranoia levels were at maximum and if she had the choice she would've stayed here, locked the door 'till someone deals with the idiot leaving his victims around like that.
"Stupid." Erinion muttered taking one slow step closer to the door. "I want that painting. It needs to be alive to finish it."
"The last three times you went out, he was okay. Breathing." Her hand was at the door knob already when a pinch of suspicion entered her thoughts. Really, she could just stay here. There were enough blood bags secured in the fridge, just in case something like this happened - she could stay cooped up in her apartment for days if it came to it. "There's no need to put yourself at risk, again."
"Need to check the toy." She replied to the empty room.
"Risky."
Erinion sleeked her hair one last time before opening the door and heading out.
In From the shadows [Based off Vampire the Masquerade] not accepting anymore players! → 5 yrs ago Forum: Casual Roleplay
@Treepuncher121 Ah alrighty. Sorry, had no idea.
© 2007-2017
BBCode Cheatsheet