STATUS: Sorry for being slow to respond, I'm pretty busy because of my work schedule and I've been going through writers block. 8 days ago 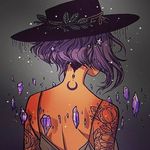 8 days ago
Current Sorry for being slow to respond, I'm pretty busy because of my work schedule and I've been going through writers block.
2 mos ago
Growing up, did anyone else think quicksand was going to be a bigger issue than it actually is?
2 likes
3 mos ago
Servatis a periculum, servatis a maleficum
1 like
5 mos ago
Insomnia sucks and shouldn't be a thing.
5 likes
6 yrs ago
I am dying to RP

ABOUT ME
Post Length
I typically try to write about 3-5 paragraphs minimum, but that will fluctuate depending on what's going on in the RP. The biggest think I request from my RP partner is no one liners, I will quickly begin to lose interest in an RP if I consistently only get one liners.

Mature Themes
I love darker themes in my RPs. I love placing my characters in difficult situations. That being said, I will not participate in plats that entirely smut. If an RP is getting to the part where it is more smut than plot, I will insist that we fade to black. I also only RP in 3rd person and I expect my RP partner to do the same. Aside from that, we can discuss limits in PM.

Post Frequency:
In an ideal world, I would love to have an RP with multiple posts a day, or at least one post a day. However, we do not live in an ideal world. I still have to go to work and have other commitments, so whereas I would love to post daily multiple times a day, that isn't practical for me. I strive to post at least once a week, if not more, and I would like my partner to do the same.

How to Contact me:
Finally, please PM me if you are interested in any pairings/plot ideas. If you respond to this thread, I likely won't notice it. I prefer to do OOC through Discord because it's faster, so just PM me and let me know if you want to do OOC over Discord.

Now on to the good stuff!

A Princess (character A) was sold/traded to a powerful alchemist (character B) by her brother. The Princess worked with the people in the kingdom to take the throne from her corrupt brother to keep him from taking over.

The original reason the alchemist takes an interest in the Princess is that her bloodline started with some kind of "supernatural" that can be decided later. I can see this RP going down either a more political espionage route where the Princess tries to get her throne back or more of a 'dark romance' nuance.
Character A was abducted by vampires running a human trafficking ring to get new food. Character B is a criminal who got mixed up in everything (either knowingly or by mistake), and for whatever reason, they decide to help Character A escape. Now the leader of the trafficking operation is after them both.
Character A is a new vampire, but she doesn't know who changed her or even that she was a vampire. Up until this point, she thought vampires were a myth; almost everyone does. Character B is a vampire hunter who finds Character A and doesn't trust her, not wanting to allow a vampire to live, Character B decides that it is best to kill her, but something is holding them back.

Fandoms
All fandoms are OC/OC because I don't like playing cannon characters.
Dragon Age:
A Court of Thorns and Roses***
From Blood and Ash
The Harbinger Series
Throne of Glass
The Crescent City

Pairings
Pirate/Stowaway
Human/Vampire
Nonhuman/Human
Master/Slave
Kidnapper/Kidnappee
Human/Deamon
-If you have any pairings or plot ideas of your own feel free to suggest them-
In HumanxBampire Cliche rp desire. → 4 yrs ago Forum: 1x1 Interest Checks
Lebump
© 2007-2017
BBCode Cheatsheet