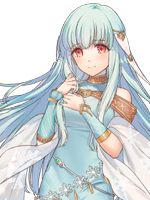 Roleplay Interests: Star Trek, Final Fantasy VII, Pokémon and FFXIV. Pretty much exclusively right now. Doctor Who if you can sell me on a plot idea. I am very hesitant to roleplay in an original world, because I enjoy fleshing out my characters, and a lot of times original worlds lack a lot of the information I need to effectively roleplay. I roleplay PG-13 scenarios. I'm 30 IRL, but mature themes just aren't my cup of tea in general. If you desire more, I’m open to conversation. I tend to avoid relationship-based RPs, though some of my characters are more prone to it than others. I have no control over Emet-Selch—he does what he wants.

Roleplay Style: For the most part, I can't RP a child. Which of course is entirely awkward for most Pokémon RPs, so on the whole I'd much prefer to RP a Pokémon instead of a Trainer. I also largely RP males, though I've been known to play other things. I'm also entirely fine RPing Canon characters of my preferred Fandoms, and I like to think I do a good job? You can expect two paragraphs minimum from me, pretty much universally, with no cap. Sometimes I won't shut up. That said, I try to write concise posts—meat and potatoes. Once upon a time I wrote in purple, but I really don't have time for that anymore. With certain partners I can do bursts of rapid-fire, but at that point my responses will shorten.

Contact Info: My reddit username is RhaqaZhwan. The best method of communication is probably Discord, and my tag is Ninian#3747. I have Steam which I'm always on, just because of auto-login lol. If you play FFXIV, I'm Rhaq'a Zhwan of Mateus, so if you're on the Crystal Datacenter, feel free to say hi!

Timezone: EST (GMT/UTC-5) On the weekends my sleeping schedule is very strange. Otherwise I'm up early and sleep early-ish. Unless it's bizarrely slow, I can't post at work, sorry!

Cravings: I want to play Emet-Selch from FFXIV so badly, willing to make compromises for this to work out. Romance or not, group or 1x1, I care little at this point! I'm happy to come up with a suitable plot and guide the story if necessary, I have a lot of ideas and I'm very flexible.

None on RPG currently.

Frowning some, he averted his gaze, "We do not know that the war is winding down. Assuming the best case scenario is dangerous. "
In Hello Kitty Eorzea Adventure → 9 mos ago Forum: 1x1 Roleplay
Petting her gently, he let out a sigh, "Yes, I am aware. I'm sure that is at least partly my fault. I have been busy. As I'm sure you have been as well." Smiling, he frowned some at her comment. "I..." Hugging her, but making a face of hating it, he continued, "You're just saying that to make me feel better."