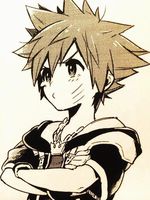 3 yrs ago
I am here a lot, but at random times. So yeah, don't be discouraged if you missed me, I will most likely be back in a bit to check again!
1 like

I'm pretty much a Keyblade wielding Crystal Gem, a ninja turtle fan, superhero, ghost-pretending-to-be-human, who's also a history and science enthusiast. A bookworm and romance nerd who also happens to be the Monkey King that listens to Kpop and is fascinated with Asian cultures and traveling.

I also really like writing, even though I am pretty much a redundant writer who can't think of clever words to use at times. But I love story telling, and that's why I roleplay! To get better at doing things like writing! :D

Please treat my friends kindly! Or else fite me. (ಠ ∩ಠ)

Tumblr: I have one, but I forgot what it was. Ask me later.

In Bearers of Courage [IceHeart + QueenSei] → 17 days ago Forum: 1x1 Roleplay
You're all good. Thanks for letting me know!
In Bearers of Courage [IceHeart + QueenSei] → 2 mos ago Forum: 1x1 Roleplay
Quinn laughed at what Yulen called the cucco, grinning. “Yeah, thanks for that!” She exclaimed, before she listened to him curiously as he explained vaguely about his plans after work. She pouted a bit with the vagueness, but ended up shrugging it off. It didn’t seem too interesting anyway. “Right, sounds kinda important when you put it that way.” Quinn then stretched, saying, “Well, I guess I should let you go-”

The girl was soon startled by the sudden yelling. “H-Huh?! What’s going on??” She asked, turning to where she heard the voices. Confused, Quinn blinked a few times before she grew more confused and worried. “What is a Goron?” She questioned, listening into the conversation a bit more to get some more information on this species. A rock person? A starving one? What even is a rock sirloin?? Quinn only grew more confused, even more so as Yulen said his goodbye quickly before joining with the others to help the so-called Goron.

“H-Hey! Wait up!” Quinn called out after Yulen. If something was happening around here, she would like to go help as well. It wasn’t like she was busy anyway.

Going over to the group, Quinn reached to the gate as well and did her best to help everyone with the Goron. Wow, they really weren’t kidding when they said this Goron could snap the stretcher! Grunting a bit, Quinn carried a bit of the Goron’s weight. “How did this happen? How are we supposed to feed this goron?” She asked through gritted teeth.
In Bearers of Courage [IceHeart + QueenSei] → 2 mos ago Forum: 1x1 Roleplay
Sorry for the delay, I'll do my best to reply later today as soon as I can!
In Seihou's Interest Check (very cool, 10/10 would recommend) → 2 mos ago Forum: 1x1 Interest Checks
poke!
In Bearers of Courage [IceHeart + QueenSei] → 2 mos ago Forum: 1x1 Roleplay
"Oh, thanks for the help!" Quinn told Yulen happily as he took the other remaining cucco. She began to walk with him back to the pen where all the other cuccos were, listening to what Yulen had to say about his current job.

"Wow, you are lucky to be able to have a job that fits what you're good at!" Quinn exclaimed happily. "I hope I can find something I can do easily and get paid for it. Taking care of cuccos isn't really what I want to do anyway." She explained, eyeing the cucco she was holding with a sigh.

After Yulen asked about her, Quinn thought for a moment. "Well, I moved to Kakariko with my mentor for just more opportunities. We couldn't do much in the countryside, since it's literally just us in a farm for a bunch of miles until you find civilization again. My mentor thought this would be a good learning experience for me. Or something like that anyway." Quinn got to the pen, opening the gate and lead Yulen to the pen where all the other cuccos were, already sitting in their nests. She placed the cucco she had in the pen, then took Yulen's cucco and placed it inside too.

"Anyways, that's really all we're doing here. Just more opportunity. I'm learning a lot about being here, so it's working!" She said with a bright smile. "I haven't seen this many people in one place before. This is much more different than back at the ranch I used to live in. I can't wait to do more things once we get more settled." Quinn closed the pen, making sure it was properly closed so that the cuccos wouldn't get out again.