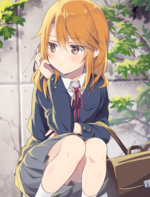 Though before we get into the good stuff like my plots. Will go over my rules and expectations, but don't worry there nothing crazy trust me.

1. We will be start with posting length. Okay as far as posting length goes I'd at the very least like to get a paragraph at the bare minimum, though more will of course be happily excepted. As for me, I can easily if given something to work with, get out three or more paragraphs or possible even more.

2. Now on to post speed. As for post speeds while I'd like one to two posts a week, I can deal with one a week or possible longer. I know sometimes things get in the way of writing replies and I'd rather you take your time and reply when your ready. Now if you can reply more that's great, and while I know I can't reply everyday personally. I will do my best to get back to you as soon as possible.

3. I'll only use Anime face claims.

4. I personally prefer to roleplay over PMs.

Okay now it time for the plots I've come up with: (YC= Your Character MC= My Character)

Okay so the basic idea for this plot would be that YC is trans, and one day you stumbles upon a magic spell book. It can be at the school library or possible a used bookstore. You find a spell in it that says it can turn you into a biologically girl instantly. You ask MC your childhood friend to help you preform the spell at his house. While MC doesn't believe it will work agrees to help anyway and one night after school our characters cast the spell. Though it doesn't take effect right away and we figure it just didn't work. Though the next morning YC is thrilled to find out the spell really work, though there one problem it transformed MC into a girl also. After finding there is no way to alter the magic YC will have to help MC get use to there life as a girl.

The Wonders of Science (F/F)

In this story YC will be a brilliant teenage scientist who is working on a way to alter person biological gender. Being the type to throw caution to the wind YC tries the potion you made on yourself, and nothing seems to happen sadly. Though when you try it on MC it seems to work suddenly overnight turning MC into a girl much to both our surprise. YC then seem to find that she can't change MC back to his original gender. So in the end YC agrees to help MC get use to there new life as a teenage girl.

In this plot MC and YC have been friends since childhood, and normally up till now MC jump at the chance to hangout after school. Though lately when you offer to hangout outside of school MC always rejects the offer. He claims he has chores to do or to much homework but you don't believe it. One day after the final bell rings you secretly follow MC and watch him enter the boys bathroom. Though after a while the only person to leave the bathroom is a girl. Then next day follows and YC yet again follows mine to the boys bathroom yet again and the same girl leaves. Though toady you stop her asking who she is and where MC is. The girl after being question reveals that she is in fact MC and tells you about the family curse. One that turns all first born males into girls, and explains how right now MC is can only keep his male form for the school day.

YC is the best friend of MC older sister, though you don't see her much considering her acting and modeling career keeps her out of town for long periods. One day YC passes my MC home and sees a shadow in her friends room. YC character finds the hidden key for the backdoor and decides she'll surprise her friend by dropping in on her. Though when YC opens the door you don't find your friend but instead her younger brother trying on her clothes. Now then how will YC react, will you keep MC secret maybe even help him with his dress up games. Maybe even treat him as a replacement for the friend you barely ever see.

For this plot YC would be my older sister, who back when we were children, use to dress MC up in her clothes. As children MC would pretend to be your younger sister playing girly games and letting you dress him up in our old clothes. Though as we got older we both agreed the this activity should stop as we were getting to old for it. Though truthfully MC never wanted it to end though he forced himself too. It's years later and both our characters are much older and in high school though MC has a secret. The truth is he still secretly wears your clothes when no one is at home and has yet to be caught. That is until one day YC catches MC in the act.

Pretending to be a Rich Girl (M/F)

Okay so YC is the hand maid to a rich girl of one of the wealthiest families in the country. Though one day the girl your caring for runs off with a cook working for the manner and can't be found. YC knows that her life will be destroyed if the girls parents find out she gone. YC goes searching but can't find her and with her parents returning soon and wanting to see her, your basically screw. Though one day you spot someone who looks just like her MC, though there one problem my character a boy. You then ask MC if he'll pretend to be rich girl until you find her. After offer him a large sum of cash he agrees to help you out for a while at least. You now have to guide MC through the everyday life of the girl he's pretending to be.
© 2007-2017
BBCode Cheatsheet