The Silence Is Deafening

STATUS: The Sun loved the Moon so much that he died every night just to let her breathe. 11 mos ago 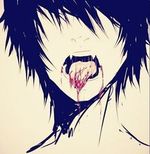 11 mos ago
Current The Sun loved the Moon so much that he died every night just to let her breathe.
1 like
1 yr ago
She was everything real in a world of make-believe. It was her chaos that made her beautiful.
1 yr ago
Women who say "I want a bad boy" are clueless. What you really need is a man who will break someone's face for you but also make you breakfast in bed.
10 likes
1 yr ago
We are all just searching for someone whose demons play well with our own.
2 likes
1 yr ago
Just when you think it's finally over, your demons laugh and whisper, "That was just foreplay".
2 likes

I'm just here for the ESCAPE.

In Ask Out the Avatar Above You → 1 yr ago Forum: Spam Forum
Umm... I'm not really into furries but you have gorgeous fur.
(hopes he's talking to a girl cat but is later proven wrong upon looking at the profile)
....Well this is awkward.
In Give Me Your Favorite Lyric(s). → 1 yr ago Forum: Spam Forum
The only way to shine your light is in the dark.

I wish the cuddling would stop.
In Who can post last? → 1 yr ago Forum: Spam Forum
This doesn't look like the sexy Twister party I was promised
In Give Me Your Favorite Quote(s). → 1 yr ago Forum: Off-Topic Discussion
"And for in that moment of pure darkness, I see your soul shining brighter than it ever has. I love the weirdness in you and the gentle way you make me go insane."

_ Jordan Sarah Weatherhead
In Ban the Person above you → 1 yr ago Forum: Spam Forum
Banned because some idiot gave me the power to do so.
In First Come, First Served (MxF, looking for females) → 2 yrs ago Forum: 1x1 Interest Checks
Hello there random person reading this! Pleasure to make your acquaintance! *cue overly dramatic bow*

Thought I would go ahead and make an interest check. Like the title states, this is gonna run on a first come, first served basis. Due to the lack of free time I have between work and my dwindling social life, I only want to take on one partner at this time so as not to overwhelm myself with roleplays I won't have time to respond to in a timely manner. Which is why I was tempted not to make one of these since I always seem to get a lot of responses but whatever, we'll see what happens. Since I did take a 4 month hiatus due to inactivity with roleplays, if you're reading this and we previously had a roleplay going that you would like to revive or start anew, feel free to punch me with a PM. I'm willing to roleplay with old partners in addition to the one new one I'm currently seeking. I will always make time for old partners.

I'm a 27 year old guy and like to think my writing level is casual to high casual. I can easily write 5+ paragraphs if my partner gives me plenty to work with and I'm passionate about our story but at the same time I don't expect you to match. Quality over quantity! Sometimes I tend to get carried away with my writing so my posts get pretty lengthy. I notice I do a lot of introspective writing with describing what goes through my characters' head, observations, inner monologue, etc so that tends to drag my posts out a bit. It's not necessarily filler but it is something I notice myself doing a lot of. Just my writing style I guess. But again, don't think that just because I wrote 7 paragraphs that you have to match or exceed. I definitely prefer quality over filler. As long as you respond/react to whatever you need to and add something for me to work off of for my next post, that's all I ask and I'll be sure to do the same in return.

I'm open to pretty much any genre as long as the plot is interesting and can actually go somewhere. Too often I've found myself writing with partners only to finish one scene then say, "Now what?" I'd really like to collaborate with someone to come up with a big main plot that leaves room for plenty of plot points along the way. I don't mind open-ended plots but at the same time I would like at least some main narrative to drive the story, otherwise it feels too stagnant. However, if either of us are struck with creative inspiration, I don't mind a spontaneous deviation from the plot if it comes to that!

I'm more than fine with adult content and if smut becomes involved, I won't shy away like a prepubescent boy haha I'll write it out if my partner wants to but I also respect the decision to fade to black if that's preferred.

I do work 40 hours a week and have a life outside of work as well but I do try to post replies at least twice a week if not more. However, that does vary depending on if my muse feels like taking a day off. I basically want to say not to expect multiple posts a day from me or even a post a day. I may hop on everyday just to check replies and respond to OOC/PMs but as far as IC posts go, it sometimes takes me a couple days, one because I only write as I have time and two because I'll never post something I'm not happy with so most of my time is actually spent proof-reading and rewriting drafts. If my muse is feeling especially spunky, I can whip something out within a few hours but this is definitely not an all the time thing. I completely understand if this is a deal breaker, as it seems to be for a lot of people, so don't hesitate to tell me so.

As far as plots, I'm not particularly craving anything specific so I don't mind brainstorming. Even if this is my interest check, don't hesitate to bring up a plot idea you want to try. I do both originals and fandoms (either canon or OC). I only play males since I have no idea how to write as a female. I won't deny any one genre but my weaknesses tend to be sci-fi, military, politics, and battle scenes. Mostly just due to lack of practice possibly. Also romance is something I won't deny since most girls seem to want it to some degree but I want it to happen naturally. Too many times I've roleplayed with girls who wanted romance to be an eventual outcome, which I don't mind, but our characters didn't have much chemistry so it felt forced. If our characters bond and love happens, awesome. If not, we'll carry on as per usual.

As far as characters, don't ask me for character sheets since I don't have any pre-fabricated. I make all my characters different for each story I write. And even when I do create a CS it's very basic info since I prefer to describe my character within the story. It just doesn't make logical sense for us to already know the entire backstory of each others characters before we even start writing, ya know? Sometimes I'll reuse the idea behind a character I used previously but only if the story they belonged to has been dropped/retired. I create all sorts of different characters but I've noticed I tend to really enjoy those of the nonhuman variety. Vampires, demons, etc. I also tend to write a lot of them as some degree of angsty/tragic/introspective but this is merely my preference and sometimes it bleeds through without that being my intention. It's just how I write. I have written plenty though with teasing personalities, snarky senses of humor, stoic bound-by-duty types, bubbly, etc so just tell me if you have a preference.

Sorry for all the word vomit but wanted to make sure I got all the boring, albeit necessary, info out of the way. Looking forward to hearing back from any of you! Have a wonderful evening! Day! Whatever it is where you are! If you're interested or just want to chat with me to test the waters, see if we have chemistry, all that jazz, feel free to hit me with a PM.
[h1][b]I'm just here for the [color=darkred]ESCAPE[/color].[/b][/h1]
<div style="white-space:pre-wrap;"><div class="bb-h1"><span class="bb-b">I'm just here for the <font color="darkred">ESCAPE</font>.</span></div></div>
© 2007-2017
BBCode Cheatsheet