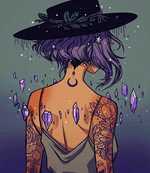 I'm Gwen. I prefer to play via Discord (ask me for my Discord name).

Availability: Sun-Thurs, intermittently throughout the day (discord); usually after 8pm CST to about midnight CST. Friday (almost any time); Saturday - will have to coordinate times as this is my "DO ALL TEH ADULTY STUFF LIKE LAUNDRY AND CLEAN" day.

Roleplaying career: "Picture it, Sicily... 1912." Well, technically more like 2001 for online play. I started out in a creative-writing forum that occasionally used dice, but mostly my RP career has been free-form creative writing based. I currently run a 1x1 campaign with someone I've written with for almost 18 years.

Hobbies and interests: I work a lot of hours (management), but I enjoy writing short stories, tinkering with floor plans / maps, Minecraft (creative mode), painting / drawing, reading, website CSS/HTML stuffs (it's been a minute though!). I love music / concerts, theater, improv comedy shows, or state parks/natural areas; spending time with my friends and my pets (6 dogs, 2 cats). I've been Pagan for 24 years.

Some general preferences include:
Fandom or world set up with a general story idea in mind (doesn't have to be super fleshed out), and folks create their own characters/backstories and we go from there. Example: We determine we want to play x character and x character, do some kind of a mystery in a post-apocalyptic setting... go!

I like long-term story arcs, but am open to short one-shot kind of scenes.

I prefer discord and can bounce between multiple stories/scenes/settings.

I prefer fantasy (all tech levels/magic), sci-fi, and apocalyptic/post-apocalyptic settings mostly. I like modern settings with a touch of magic/fantasy tossed in (vamps/weres/magic etc.).

I RP adult characters only (age-wise).

I don't write for other folks characters & ask that they not write for mine or make statements about how my character should/would/must feel/think/act/believe, etc.

I operate in the creative "don't be god, but be fun" mode almost exclusively, but will occasionally throw a few dice around based on the circumstance / story line needs.

I advocate for open communication - if something's not working, out of character convos are welcomed and respected. :)