Member Seen 31 min ago
Dagger
Author of Many Faces 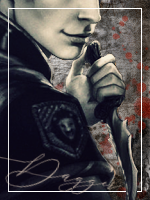 6303 posts
in 2565 days
Seen 31 min ago
Bio
As the seconds passed, Jacob glanced over his shoulder idly, waiting for someone to answer the executive suite door. There were no other people in the hallway, and he hadn’t told any of the other members of the security team where he was going, so it was unlikely that word would get out that he was snooping behind Caspian’s back. At least, not before he found out what was going on and could confront the king, himself. He didn’t plan on hiding his actions forever, after all. Loyal to the crown, he only wanted to make sure that the ruler of Aspiria wasn’t walking down a path he would regret later on.

The sound of a door handle turning jarred him from his thoughts, and he turned back to the suite, slightly surprised that someone was actually inside. Knocking had felt like a stretch, so he’d only tried it as a precaution, and for half a second the thought flitted through his mind that he could have been wrong about Caspian’s involvement at the hotel. If someone else was staying in the executive suite anonymously, he could have just landed himself in legal trouble for hunting them down. His heart felt like it skipped a beat, but the worry was replaced in the next instant with shock when he saw who was on the other side of the door: the rebel girl he’d seen with the former prince before.

It seemed she had been laying low in the Sunset Veil all this time, which must have been why the soldiers around the city had never been able to find her, and she hadn’t turned up on any of the cameras around the capital’s borders. The pieces were all falling into place, especially when she carelessly gave away Caspian’s involvement with her question. Now he had the evidence he’d needed to prove that his leader was the one who had been harboring this war criminal. The king of Aspiria was still behaving like an irresponsible teenager.

In a flash, the door was closing in his face as Iris tried to get away from him, but Jacob still had the reflexes of a trained soldier. He barred the opening with his boot and wrenched the door back open with a forearm, forcing his way into the room without asking for permission. Closing it again behind him, he stood with his body between the rebel and the exit, so she would have to go through him to escape. He also grabbed hold of her arm with his free hand to stop her from running further inside.

“Not so fast,” he said sternly, eyes narrowed as he pulled her roughly toward himself. “You’re going to tell me what’s going on here.”
Hidden 3 days ago Post by sukikyoufu
Raw —
GM

1595 posts
in 1163 days
Seen 6 hrs ago
Bio
Feeling her heart race as the door wouldn’t shut and the fact Jacob had blocked it with ease her instinct was telling her to run, to get far away from this security guard who would be able to take her straight back to that prison. The thought of it made her head spin because the memory of the questioning was still fresh in her mind, it had played its own part in her not being able to sleep at night. Remembering the pain of the truth drug, the cruel way the interrogator had dealt with her and then ending up in hospital. It was all coming back to her when she had tried to hard to forget it all.

The panic only increased when she had tried to move further back into the room only to be stopped before the thought had fully crossed her mind. Feeling his hand wrap around her arm felt like a death sentence and as much as that would be the easy way out, she knew she couldn’t. Right now, she needed to stop Ethan and his plans to hurt Cas, Jacob wouldn’t understand that, and neither would Cas and both would be for two separate reasons. Cas wouldn’t see that she was trying to help him, and would no doubt say that he was safe, Jacob wouldn’t believe her or simply use their security team to ‘fix’ the problem.

“N-No!” Trying to wriggle out of his grasp and put distance between them Iris could feel herself shake, her world crashing down before her. “Let me go!” Desperation sinking in as she held back a sob when he pulled her roughly towards him.

Iris fought against it, she kept struggling against his grasp not wanting to be held by him because he could just easily drag her away and back to that hell hole that kept her up at night. “Nothing is going on here. I just want to go home.” Even if it wasn’t the complete truth Jacob didn’t need to know that, perhaps he would take pity on her and even escort her back to the districts which would make things easier on her.

“What is it you want to hear from me? That I’m not supposed to be here? That Cas could do so much better than me and wouldn’t have to worry about keeping me hidden? I know I shouldn’t be here, but I can’t exactly walk out that door and stroll on down to the districts can I now?” Iris knew she was rambling on, part of it due to panic but she didn’t know what else to say to him. It was now down to Jacob on what he was going to do with her because there was no way Cas had removed the warrant on her and it was clear the guard wasn’t here to take her to the palace because he seemed surprised to see she was in here and demanded to know what was going on.
Hidden 2 days ago Post by Dagger
Raw —
coGM

Member Seen 31 min ago
Dagger
Author of Many Faces

6303 posts
in 2565 days
Seen 31 min ago
Bio
Even as he gripped Iris’s arm to stop her from wriggling out of his hand, Jacob’s mind was racing as he pieced together what was going on. He remembered that Caspian had taken an interest in this girl before any of them had known that she was a rebel, and even after she’d turned him over to her comrades, his infatuation hadn’t seemed to die out. Apparently he was still so taken with her that he was willing to betray the trust of his military and his people in order to keep her around. If anyone else found out he was hiding a member of the Scourge under the soldiers’ noses, there would be irreparable consequences.

So, even though he harbored some respect for the young king, he wasn’t going to take this situation lightly. The more Iris fought against him, the tighter he held her arm, determined not to let her get away. It didn’t matter to him that Caspian was interested in her. She was an enemy of the state and a threat to the monarchy. He was especially concerned about the influence she had over Atlas’s son, since they were meeting in secret where she was the only voice in his ear. It wasn’t beyond the realm of possibility that she was planting seeds to turn him against his own kingdom or to convince him to do something he would regret. If either case was true, he wouldn’t hesitate to drag her out of the suite and lock her in a prison cell no matter what his liege had to say about it.

When Iris began talking, the guard was slightly thrown by her claim of wanting to go home followed by a mention of how it wasn’t possible for her to leave the capital. She didn’t sound like someone who was very invested in whatever sort of arrangement she and King Caspian had brewed up. However, he wasn’t going to simply take her word at face value. She was a fugitive who had just been found by someone who had every right to arrest her on the spot, so it could have been a desperate ploy to escape.

“Yes, you shouldn’t be here,” Jacob growled. He didn’t care about her comment about being unable to leave, but he could at least acknowledge that she’d gotten one thing right. If she was going to be in the capital, then she should have been locked away where she couldn’t do any more damage. But he wasn’t just there to slap her on the wrist and walk away. “I want you to tell me exactly what’s been going on between you and the king,” he demanded roughly. “We can start with when this charade began. How long have you been hiding here?”
Hidden 9 hrs ago Post by sukikyoufu
Raw —
GM

1595 posts
in 1163 days
Seen 6 hrs ago
Bio
Feeling constricted by the tightening grip on her arm it only worsened the panic she felt being caught red handed and she couldn’t help but continue to struggle against him. Fears of being thrown back into prison kept creeping in and she knew this was the end of the road for her, she just wasn’t sure on what part was now coming to an end. Acceptance to the end of her relationship with Cas was something she had come to terms with because she knew it was something that could never happen. That was something she knew would happen, but if she got herself thrown into prison now who would stop Ethan? Then it would the end to someone who she truly believed could make a change for the better.

“Do you really need me to spell that one out for you?” Hissing out her words as she still tried to free her arm from his grasp, “Let me go already! You’re hurting me. I can’t exactly go anywhere.” Once more she tried to snatch her arm back grimacing because he had a vice like grip. “There is no charade, no big plan. No secret. You know full well what happened the night I disappeared, you figured it out. You confronted Cas about it, and he told you everything what more do you want to know?”

It was like word vomit because of the panic and fear she felt inside, rambling on when she didn’t even know what to say to him. What use would it be to plead her case to him? There would be no sympathy, he wouldn’t care what she had been through and all of it was down to the Capital. The massive divide between people, the previous monarchs who had been a part of causing the rift and all the hatred for them to create a rebellion for equal rights. None of it mattered, she was just another member of the scourge to him that was probably trying to stick her claws into the King to live a life of luxury. That’s all anyone would see in her.

“I can’t tell you how long I’ve been in this hotel room because all the days roll into one. I don’t want to cause damage. I know I’m not good enough for him and that he would do so much better without me, but I’m still stuck here because the minute I leave is the minute I go back into a cell.” Shaking her head, she looked away from Jacob and glanced towards the kitchen still stacked with untouched meals. Between the fear of her life and now the upset of admitting just how wrong she was for Cas she did her best to hide the emotions from her face, trying not to let herself get so worked up again and fall into a pit of emotion whilst he was here.
↑ Top