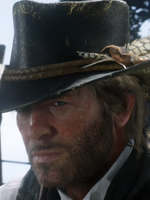 It was a barren wasteland of pale dunes and rocky outcrops, dwindling paths and dead ends, with the only decoration being the low shrubs, half dead trees and the occasional corpse. If he squinted he could just make out the silhouette of Kirkwall's Hightown in the distance, partly obscured by a shroud of mist. Sharp gusts of wind blew in from the Waking Sea, and usually that was something he didn't mind at all, but here all it did was annoy him even further, particularly the way it kicked up the loose sand, blowing it into his face and getting everywhere. Jarvaazim was convinced that sand had even gotten down into his breeches somehow.

And then there were the people. Could barely take thirty steps before running into another guard patrol, or a group of bandits or smugglers, or even worse... slavers. Fuck, he hated this place. Not that he wouldn't love to bash a few slaver heads in, but that wasn't what he was here for.

It was odd, really... Helping escaped slaves to get away from Tevinter – or the occasional Circle mage away from the templars – by accepting them aboard his ship and bringing them to a safer place where they could start a new life, that was something he'd continue to do until the day he dropped dead. It was important, to him and to the rest of the crew, and it was likely the only good thing he'd ever do in this life. Depending on one's point of view of course.

It was something he did for free, never would he accept a single coin from the poor bastards who'd lived their lives knowing only oppression, suffering and fear. And he knew plenty of people who shared a similar mindset, his contacts in the Tevinter Underground and sympathizers who risked their own necks to shelter the escapees in safe houses or even their own homes, a place for them to rest up on the long journey to shore where they could be safely picked up by his crew. Payment wasn't necessary. It wasn't wanted.

Generous donations though, that he wouldn't say no to. This benefactor, whoever they were and wherever they came from, always left a surprisingly large sum of money for him to pick up at a well hidden dead drop, of which the location would be given to him by a different face each and every time. The money always came with a note, thanking him and telling him to keep on doing what he was doing. And occasionally the money came with a favor; a location and a name, where he was to pick up yet another unfortunate soul.

This had been going on for the last three years and whoever his anonymous benefactor was, Jarvaazim was sure they had to be filthy rich and very invested for whatever reason. But hey, he wasn't complaining. Odd as it was the deal worked out. Happy escaped slaves, happy anonymous benefactor, happy crew and happy pockets filled with gold. What was not to like?

This time though... this time was different.

The last note had said to come here to the Wounded Coast, to a little alcove close to the beach, near the large rock that resembled a rooster's tail, or a hand with the fingers pointing up. There would be another job for him soon, an important one and he would be given some help. Someone he was to meet here, someone who knew more and would give him more details on the who and why and when later on.

And that right there was what didn't sit well with Jarvaazim at all. He didn't need help, for fuck's sake. More importantly, he didn't like not knowing what to expect. He'd never considered himself to be paranoid in nature by any means, but he trusted his gut instinct and it had rarely proven him wrong before. And he liked to have an actual say in who he worked with, blast it all.

“Bullshit is what it is.” he grumbled under his breath, more to himself than to anyone else who was around to hear. Jarvaazim had elected to only bring a few with him, the rest of the crew was still on the Etrusco; she lay anchored further out as sea, out of sight. Nanyla and Dali waited further down the beach with the skiff they'd used to come ashore. Kalanna was up ahead, keeping a look-out for their mysterious co-worker-to-be. Laying flat atop a tall rock she was well hidden and had a perfect view of the narrow path that led down to where they were waiting.

And Larue? Larue paced. Back and forth, back and forth, glancing up towards the lone path whenever he passed it. Larue was the newest member of the crew, the son of a minor duke who'd been down on his luck after he tried for Chevalier and failed miserably. Joining a pirate crew instead wasn't exactly the most logical next step, but Larue had been so ashamed by his failure that he'd left Orlais and fled North, unable to face his family, and had ended up in Antiva where Jarvaazim had found him drunk out of his mind in a dingy tavern one night.

Well, a pirate's life at sea wasn't the honorable career he'd imagined for himself, but it sure was full of surprises and adventure and Larue was sympathetic to their cause with the slaves, there was some glory to be found there. And so he'd joined.

He was woefully green though and could do with some hands-on experience. “Would you stop it with yer pacin' already?” Geez. Shoving his knife back into the sheath handing from his belt Jarvaazim glared at the young Orlesian, who froze mid step and slowly turned around with a sheepish grin on his boyish face.

Hm, it wasn't like he hadn't considered that possibility, though the note had made it sound like it was only a single person they were waiting for, or a small group at the most. “In that case you'd best keep yer wits about ya and get ready for anythin'.”

And as if that was a cue, Kalanna shifted and turned towards them, her hands a quick flurry of movements before she slithered down the rock like an eel. The message was clear: someone is coming.

“Right. Stay back, be quiet and wait fo' my signal. Just in case this goes south.”

Larue nodded and took a step back, inhaling with a shaky breath. Kalanna joined him and reached out to pat his shoulder, but short as she was she only managed to pat his bicep instead.
Jarvaazim crossed his arms and widened his stance, the sharp winds whipping his dreads to the side as he glared at the path up ahead.