MxM preferred, but can do MxF. Little bit of everything inside. +18 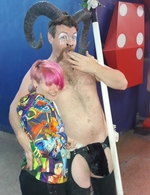 Alrighty nerds, my name is Nyx, and now that the world is basically closed, I have the RP bug. After the world is back to 'normal', I am going to be working again, so all I really ask for is patience. I love RPs of all sorts, fantasy to anime to street racing. I'm just looking for a low-pressure RP, as my replies will not be consistent. I am a casual RPer, but I'll go off your posts more than likely because I try to match my partner.

I'm most comfortable with MxM for mature themes, but can do any pairing if there's no romance or we fade-to-black. Don't ask, because I dont know why either. I can play seme/top, uke/bottom, or switch. I'm genderqueer so idfc what your character identifies as. Doesn't make a difference. I'm 25 and a military veteran, so I cuss and I like M+ themes (but not without plot). I don't typically fade-to-black because I'm a dirty deviate, but we can if you are more comfortable with it. I don't have any triggers, but if you do I will respect that boundary.

None of these are requirements, but I like adventure, action, angst, slice of life, apocalyptic, fantasy.. really anything except sci-fi because it is super unfamiliar terrain. I'd be open to trying, however.

I think that's it for all that. I suck at these. Below are my ideas for those still interested, and all are open to interpretation. Such as the merman idea, it can be medieval or modern, and it can be a merman that turns human on land or a merman that can't leave the water. Whatever. That's the beauty of Roleplay, yo. I'm not attached to any of the roles, so you can choose the pairing and who takes which role. I just want to RP. Also, feel free to mix up my pairings. Hell, if you want to do merman/vampire we could make it work. That.. would actually be kind of cool. MOVING ON.

Just talk to me! I'm very open to ideas, but if I don't know the (fandom) universe I'll let you know! I'm sure I haven't covered half of the RPs I'd love to do!!

Now let's get to the meat and taters! My pairings that I've thought of so far.

A small group of people, or just our 2 characters, stranded together somewhere. An island, a building or other area during a natural disaster or apocalypse or something, idk. Can be combined easily with my pairings, so..

Illegal, underground, people-may-die, adrenaline inducing vroom-vroom RP (street racing). I'm super flexible with character roles, but I was thinking my character is a rising star in street racing. Your character is a cop (or another racer, or a mechanic, I'm just spitballing ideas) with a grudge against my character. Maybe I killed your partner in an accident, maybe I ran over your favorite rubber ducky.

If you've made it this far.... DON'T be afraid to share your ideas as well! I don't have any specific plots in mind, I have a few ideas for certain pairings, but they're hecka vague! ^^"

Fill out this sheet if you want to. I don't care.

How many paragraphs per post are expected from me?

And anything else that you think I should know beforehand.
1x Like