Rise with the moon, go to bed with the sun...

STATUS: Ooooh, @vancexentan that sounds pretty good. I'll go check it out. Thanks a million. 9 mos ago 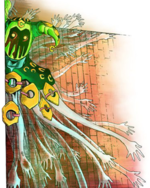 9 mos ago
Current Ooooh, @vancexentan that sounds pretty good. I'll go check it out. Thanks a million.
1 like
9 mos ago
Yo, someone should PM me some spooky ambience. I need some inspiration for a couple of horror threads I'm doin'.
9 mos ago
@Andreyich Based.
3 likes

Heya. Newbie here -- I'll make this bio a little more visually pleasing later, but I enjoy horror roleplay, action, mystery and fantasy! Open-minded to other genres though. Thanks for reading!

Well weren't we risky tonight? You decided to go wild for the night and get a bit too comfortable with a suspiciously guilty partner -- without contraception! How dirty of you! Sprawled out on the bed, you hear a low thud coming from the door... Boom... CRASH! It's broken in; a rather mundane woman with soulless black eyes and rotting teeth. You can see a dark sludge slide down her thighs.. Nobody else can see her! Thankfully, she's a slow walker... But nothing will stop her.

You decide to explore the vast greenery of a local forest, walking along the muddy trails to unseen landmarks. Hidden betwixt two trees lies a small, humble door. Out of curiosity, you open it, and begin tumbling down an infinite expanse of darkness. Your body flips and tumbles, and the collision with the floor leaves you unconcious.. You wake up in a sort of void, with platforms like chalk lines extending before you..

This RP focuses more on the environment rather than a single predator. Explore the realm! Meet whimsical blood thirsty characters! Discover its truths! Or just... Get the hell out of there...

W-what's going on? The walls are melting.. The corridor contorting -- I feel claustrophobic -- trapped; something's toying with me. A many armed octopus? Some lovecraftian creature owns this place. Something beyond comprehension. You'll never reach the truth.

This is an eldtritch abomination. It's up to you to escape this twisted reality the entity has conjured.. Or die trying.

Give me a list of fears and I'll make something from your nightmares. Not set in stone, and might take a little to get started, but a personally tailored abomination? Why not, right? You weren't gonna sleep anyway, were you?

Some Rules:
- THESE ENTITIES CAN'T BE FOUGHT! They're not much of a monster if your Dragonball z-esque character can blow them to high hell, right?
- Attempted actions. Any actions towards one another has to be "consented" by the other writer. For example: If you write "I throw punches towards x" that's acceptable, as the effect of the attack is open-ended. But if you try to say "I punch/punched x, that is in saying you've actually made contact with the other writer's character without their permission (I hope I explained this rule well enough -- ask me about it if you don't understand). This rule should be enforced by common sense and playing fair -- this rule also applies to the next:
- No God-modding! Pretty please? Just because you can nullify any attack to your character in theory doesn't mean you should. Having a perfectly invincible character is incredibly dull, and doesn't exactly make anything scary.

I hope you may consider this noob's request!
In Hey. → 9 mos ago Forum: Introduce Yourself

<Snipped quote by 3oclockfog>
Holy crap, a newcomer that actually sticks around past their first post.

Sounds like a good list of interests. You shouldn't have too difficult of a time finding a Roleplay with interests like that. Hopefully you're able to find what you're looking for and enjoy the time that you spend on here.

Gee, I didn't think the average noob attention span was that limited..!
I hope so as well. Trying to figure out where to start.. In the mean-time; I'll be writing up some character profiles in google docs in preperation. Thanks again!
In Hey. → 9 mos ago Forum: Introduce Yourself
I just wanted to say thanks for all the greetings, I feel pretty welcomed!

And @Hyde -- I'm pretty well-rounded when it comes to genres I write in. The most prominent ones to me are horror, mystery and action.