The Ultimate Epitome of Stupidity

STATUS: This is another status update. 6 yrs ago 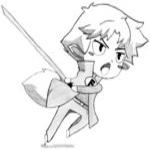 "OI!" Clarent calls, his voice far from booming, but still traveling far. "I'm not going to hurt you, come back ye spineless coward!" He jumped off the roof and began walking, in Saeid's general direction. Creed and Kevin follow, the ghosts flying over Clarent's shoulders, still only interested in observing what goes on.
In HCL 2: Twisted tinkers' triumph → 6 yrs ago Forum: Free Roleplay
@supertinyking
"..." The guild members slowly had filtered into the guild. Nobody was talking... they were a bit disturbed about this turn of events. Everyone just sat, and stared at one-another. On the roof of the guild building, Clarent was seated away from prying eyes. Creed and Clarent had been talking for a bit, slowly Clarent returning from master-minded to a no-master mentality. They spoke softly, as Kevin was close by and had not uttered a single word since what happened to Minx. He simply sat next to the two men, well, him and Creed floated just above the roof next to the sword, who sat there and stared at the sky.
In HCL 2: Twisted tinkers' triumph → 6 yrs ago Forum: Free Roleplay
@supertinyking
Kevin stared as he saw this and his mind worked to comprehend... Everyone stared. Creed looked at the approaching man, as Wendy took a step towards Minx before stopping. She'd been threatening to kill them all... but she still didn't like watching people die when she could help... It was then that Mavis tapped her on the shoulder and shooed her off, signaling that she should help. Wendy was surprised at the former guild master's appearance, but upon instinct she trusted her and ran over to Minx, unsure of whether she could completely heal her or just preserve her life for a few hours or so, not knowing the severity of the injury. She used whatever healing magic was at her disposal, but was prepared to fail.

Clarent turned to the approaching person and pointed his sword arm. "Who are you?!" He asked, growling. Creed just stood there, acting as a very interested observer. Anyone else of the guild was simply watching, realizing they should probably run, but not bringing themselves to do it.
In HCL 2: Twisted tinkers' triumph → 6 yrs ago Forum: Free Roleplay
@supertinyking

Clarent looked around, his instinct to obey his Master, but- then he heard it. The sweet pleas of a man who was about to die. Clarent grinned rather darkly and turned slowly, stopping with his eyes set upon Saied. "I will kill this one first, my Master. I'm sorry for disobeying you, and you may punish me later, but I cannot halt myself." His arm formed into a blade and he started walking towards Saied, but nobody moved to stop him. They could not bring themselves to get in his way, as he made a healthy clip towards Saied, holding his sword arm so as not to cut himself, but hold it.

Creed and Kevin watched this from above and Creed blinked. Normally, he liked Clarent's bloodlust, but not when it was directed at his friends... Creed started floating down and one by one the guild noticed the barely-opaque figure that looked like someone who was long dead. He landed next to Clarent and walked with him. "Hey buddy. Remember me?" Clarent's eyes darted at him and he made a noise as a negative response before looking at Saied again. "Aww, really? That sucks. C'mon, you couldn't forget your old pal Creed, right?" Clarent didn't answer.

Kevin remained floating above, not moving towards anyone. When Mavis hesitantly pointed at Minx, he hesitated before shaking his head. "I-I don't really want to talk to her right now... I don't know what I want to do..." Mavis then moved in front of him and glared at him, pointing at Minx again, with more force this time. Kevin, in slight fear of his well being and simply to get Mavis off his back about it, he floated slowly down to where Minx stood, saying and doing nothing else.
In HCL 2: Twisted tinkers' triumph → 6 yrs ago Forum: Free Roleplay
@supertinyking
The guild members stared at Darkside, and most of them simply returned to the guild building, not really... knowing what else to do. Natsu went over to Darkside and checked to make sure the man was just unconscious and not dying or something, while Wendy ran over to heal Blood. It seemed nobody was interested in any kind of revenge against Darkside, instead the idea didn't even seem to cross their minds. Natsu tried to wake the man up, as best he could.

Creed and Kevin were still getting a handle on the whole flying thing when the three souls stopped above the guild building, surveying the scene. Mavis tilted her head. "Seems like whatever was going to destroy the guild is gone... No, it's still there... Something very deadly is down there..." Creed blinked, recognizing the energy. "...Clarent?"

It was then that Minx realized that Clarent was no longer on her person. The sword appeared to have vanished into thin air. Clarent, human form having been taken, stood amongst the guild members, unnoticed until he spoke up. "Now, which of you am I gutting first? I'm still hungry, and that bitch wouldn't feed me..." Everyone froze. Nobody responded, except in a type of fear... they feared the sword-boy.
In HCL 2: Twisted tinkers' triumph → 6 yrs ago Forum: Free Roleplay
@supertinyking

Erza stood firm as her mind was assaulted, having experienced this kind of influence before, yet as she focuses she sees Blood charge Minx. She went to help, but instead stopped herself and held her ground. If Blood failed, she'd have to protect the guild... With her own life. She came to terms that they might be completely and utterly without hope...

It was then that they awoke. They both sat up with a start and looked at each other, bewildering themselves at their sudden awakening. Creed stared into Kevin's eyes and Kevin stared back, except they were also staring through each other. They looked at themselves and their bodies were very dim... see through. "It's about time the two of you woke up." Mavis smiled, swinging her legs on an old stone that she liked to sit. "W-We died?" Creed asked her. The voices were... gone... The souls had been used up. "That's right! Luckily, your souls held themselves together and you got back here in one piece. Well, almost one piece... Kevin, you're missing about one-one hundredth of you. Your soul was shattered, and a tricky matter to sweep up."

"Now, if you would like ethereal bodies, just... focus on touching something. Your magic should do the rest." She wasted no time in showing them the ropes. It would be nice to have other ghosts around to chat with. The two men did, and at first they failed a few times, before Creed was picking up small rocks and Kevin got to the point he was juggling them. Mavis watched this all, amused at the two souls. They were conjuring up ethereal bodies, and it would take a while to get to the point they could cast magic from them, but it was a start. "C'mon boys, the guild is in danger!" Mavis then flew off, leaving the boys to scramble behind her, learning how to fly... well on the fly. "Wait, WHAT?!" They yelled in unison. "DON'T LEAVE UUUUUUUUUUUSSS!" Mavis's giggling could be heard far and wide, within the ranges of that small island.
Hi! Bye!
<div style="white-space:pre-line;">Hi! Bye!</div>
© 2007-2017
BBCode Cheatsheet