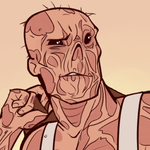 I welcome you to my thread. BeepBoop is my name, manly men are my game. Looking for a nice character-centric RP with a slow-burn plot and a world that isn't like our own? You've come to the right place.

Buyer beware!
English is my second (technically third) language. This means I'm bound to make mistakes. If that's an issue I understand, but I'm sad to see you leave.

- As mentioned before, my ”main” characters tend to be male. I'll play anything from alcoholic office workers to orc warriors to sentient robots. One thing that stands out is that my characters tend to be slightly unconventional compared to the most basic romantic lead. You won't find any gallant knights here, no sir!
- I'm currently most interested in MxM and polyamory. Open to FxF depending on the plot. At this point, I'm ready to admit that romance is mandatory, though I like to arrive there as naturally as possible.
- Casual to low-Advanced. Currently, my posts average to around 300-500 words, though this largely depends on my partner.
- Strongly prefer PMs over threads.
- At best, you'll get a response from me twice a day. At worst, it might take me weeks. Give me a nudge if it's taking too long.
- If we've previously had an RP going and you're still interested in continuing, don't be afraid to contact me!

What I'm Looking For

- A friendly, patient partner.
- Let's talk! I enjoy OOC talk even when it has nothing to do with the RP.
- Build a plot with me. Let's bounce ideas back and forth until we're both happy with where the story's going.
- Decent grammar and spelling. We all make mistakes, but let's try our best!
- Quality over quantity! Don't stretch out your posts out just to reach a word-count.
- I'd prefer it if you were 18+. Depending on the RP we're likely to dive into mature subjects and more adult situations. Not really looking to write smut, but I'm perfectly okay if it comes up.

Post-apocalypse - Fallout-style ghoul raiders, Mad Max-style War Boyz, or farming for the good of mankind!
Soft Scifi - Want to romance a hive-mind? Now's your chance!
Urban Fantasy - How about a Nosferatu? Yes, no, maybe so?
Fantasy - Ready to play an orc at a moment's notice.
Cyberpunk - Need a sliced up 'borg in your life? Come get him.
Superheroes - A well-seasoned hero is looking for a new partner!

This hunter, though? Eddie's tracked him for a good twenty minutes now, and he's come to a pretty clear conclusion.

”He's kind of stupid, huh?” Eddie states. On the other end of the phone, Rachel bursts out laughing, and he has to smile with her. He leans against a brick wall, well-hidden by the bustling crowds on the street.

”Poor bastard,” she purrs when her laughter slows to a gravelly chuckle. ”Think they sent him to die? Gotta feed the fire, they'll get bored of ending us otherwise.” She pauses, and there's a lull in the conversation. She's debating if she should say anything, and Eddie gives him all the time he wants.

”You know, we've got one neonate stationed a mile away,” Rachel continues. Eddie shakes his head, but she can't see that now can she? So she keeps going. ”A lot better to risk him than – ”

”Nah, I'm going in,” the prince interrupts. He's already pushing away from the building, crossing the street. What the hell is Rachel gonna do, hm? Stop him? ”' Sides, if anyone's gonna charm this hunter off their feet, it's me.” Eddie ends the call before the sheriff can say another word. Honestly, he's a bit excited. Been a while since he got involved with the hunters.

Charming people isn't that simple. You can't just knock on someone's door, offer them a basket of fine cheeses. No, you need to be smart. You need to create a scene. So Eddie pulls his worn hood over his head and lets the dark circles around his eyes grow. There's something exhausted about his eyes, looking like he hasn't had a good night's rest in weeks. He's not his charming, usual self; instead, he comes across a disheveled mess. He walks around the house until he finds a locked backdoor and rattles it. Loudly. Lockpicking the window is just as noisy; he's a new burglar looking to get in, not expecting anyone to be home. And why should he? The damn place has been empty for a long time. The door cracks open, and Eddie lets out a shaky, flabbergasted giggle.

Important information! Or not. You be the judge.
- Guess you could call me a casual player? Word count tends to be 200 words or more.
- I'm generally an active partner! You should get a response at least once a day. I don't require such... enthusiasm from partners of course. We've all got lives. Except for me.
- I prefer my pairings to be MxM. I also love romance so it's pretty much mandatory in all RP's.
- On the other hand, I don't do yaoi or the dom/sub thing. We're writing people, not stereotypes!
- Mature subjects and smut should be discussed beforehand. We've all got things we don't want to write about. Better talk it out instead of making each other uncomfortable.
- That means that communication is key! I expect us to talk over a lot of details before and during the RP. We're developing a story, a world. That means we gotta talk things out sometimes.

When you send me a PM, tell me about yourself! Preferences, RP habits, all that stuff. Feel free to ask questions too, I don't mind.

Anyway, I'm full of awful ideas. The best kind, I promise. Tell me if they sound like fun to you.

A world that loves superheroes but fears superpowers

Dragon Age. I want to play a Saarebas. Could be based after Trespasser.

Fallout. I want to play a pre-War ghoul.