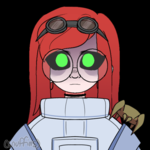 4 mos ago
Current Still looking for players for Reality's Heroes, a Casual, Multi-Fandom RP starting in Hyrule.
4 mos ago
Still need players for Reality's Champions, a multi-fandom RP. Starting world is Hyrule.
4 mos ago
I just wanted to listen to a silly song about beer from 2011. Instead I get a song about people partying during lockdown. All because Corona is the name of a beer, a girl, and a horrible virus.
4 mos ago
Multi-Fandom RP, looking for players- roleplayerguild.com/topics/…
1 like
4 mos ago
Looking for a co-GM for a fandom RP.
1 like

Strax kept pace with the princess easily. His stride was long and heavy, each step echoing off the polished stone floor and reverberating through the large halls. The large grin that had been fighting to be seen finally forced itself onto his face when he heard those two magical words; Speak freely.

Duke Strax kept his expression stern and emotionless, despite the proud, beaming smile that tried to force it's way onto his lips. He remained at attention up until the princess turned her attention to the guards. Crossing his arms, Strax finally allowed himself a smirk as he listened to her put the armored bullies in their place. While he knew better to speak over royalty, Strax did make eye contact with his own guard, giving them a series of looks that nonverbally communicated that they were to move his things into his room, guided by the palace guards. Strax straightened once more just in time for the princess to turn back to him. "It would be my great honor, your majesty." He answered. A tour of the castle was just the sort of thing that would give them time to get to know each other. And for him to learn more about the challenges ahead.
In An important choice: who will she choose? A futuristic royalty rp. → 2 mos ago Forum: Free Roleplay
Sorry I'm so late with my post! Things have been happening very suddenly and all at once. If I do nothing else tomorrow, I'll get a post out.
In Word association Game! → 2 mos ago Forum: Spam Forum
Pit
In Song Reference time → 2 mos ago Forum: Spam Forum
BWUB WUBWUBWUBWUB
© 2007-2017
BBCode Cheatsheet