STATUS: Working on Kingdoms of Khoyee, an MMO Tabletop RPG where (almost) all combat is based on a D20 roll. 2 yrs ago

2 yrs ago
Current Working on Kingdoms of Khoyee, an MMO Tabletop RPG where (almost) all combat is based on a D20 roll.
1 like
4 yrs ago
Working, deving, trying to live life, and find some time to rp here and there.

Below is an early version of your character being displayed on the right side of the website. I'll be adding more to it over time, making it so that everything has either an explanation tooltip if it's something like health, or if it's a piece of equipment or such it will hyperlink to the page and anchor where the piece of equipment's details are.

If I can get extra fancy I'll have a click for details option which will take you to a page that pulls all that info into one spot. So instead of going to one page for your longbow and another for your skills this detailed character page would have all that info pulled into one spot. But alas I'm learning how to do much of this as I go so I have no idea if I'll actually be able to pull it off. But I'm hopeful n_n
In Kingdoms of Khoyee (MMO Tabletop RPG) → 1 yr ago Forum: Tabletop Roleplay
In the middle of moving from Cali to New Mexico. Might be a bit quiet for a week or two. Having some icons made during that time though. Here's the longsword so far,

Got a logo made for the game. Adding it to the OP now (as well as other places)

Tomorrow Jon will be starting on equipment icons.

Edit: Changed the Zeroth post from old party info into an update schedule.

May
• Begin developing art for the game, including the logo and icon work.
• Create KoK bot foundation (the bot is meant to provide help to players if they so choose to use it, such as calculating damage output and party members info)
• Search for and complete missing parts of the guidebook (for example short blades were lacking compared to other weapon types)
• Create an NPC generator to provide a starting population of NPCs as well as steady growth over time

EDIT #2: Created a website. Will be adding more information to it later but it's functional, allows you to read the guidebook, download a copy of the character sheet, and join the Discord.
In Kingdoms of Khoyee (MMO Tabletop RPG) → 1 yr ago Forum: Tabletop Roleplay
Working on bot features and commands to make things easier on players.

I'm working with Jonathan Elliot to bring an artist's touch to KoK.

I originally brought him on for his creature designs, after watching him draw this guy in Twitch,

But I found out he has some experience with tabletop games already as he did all the art for one called Dark Domains,

He also did some of the art for Darkest Dungeon, 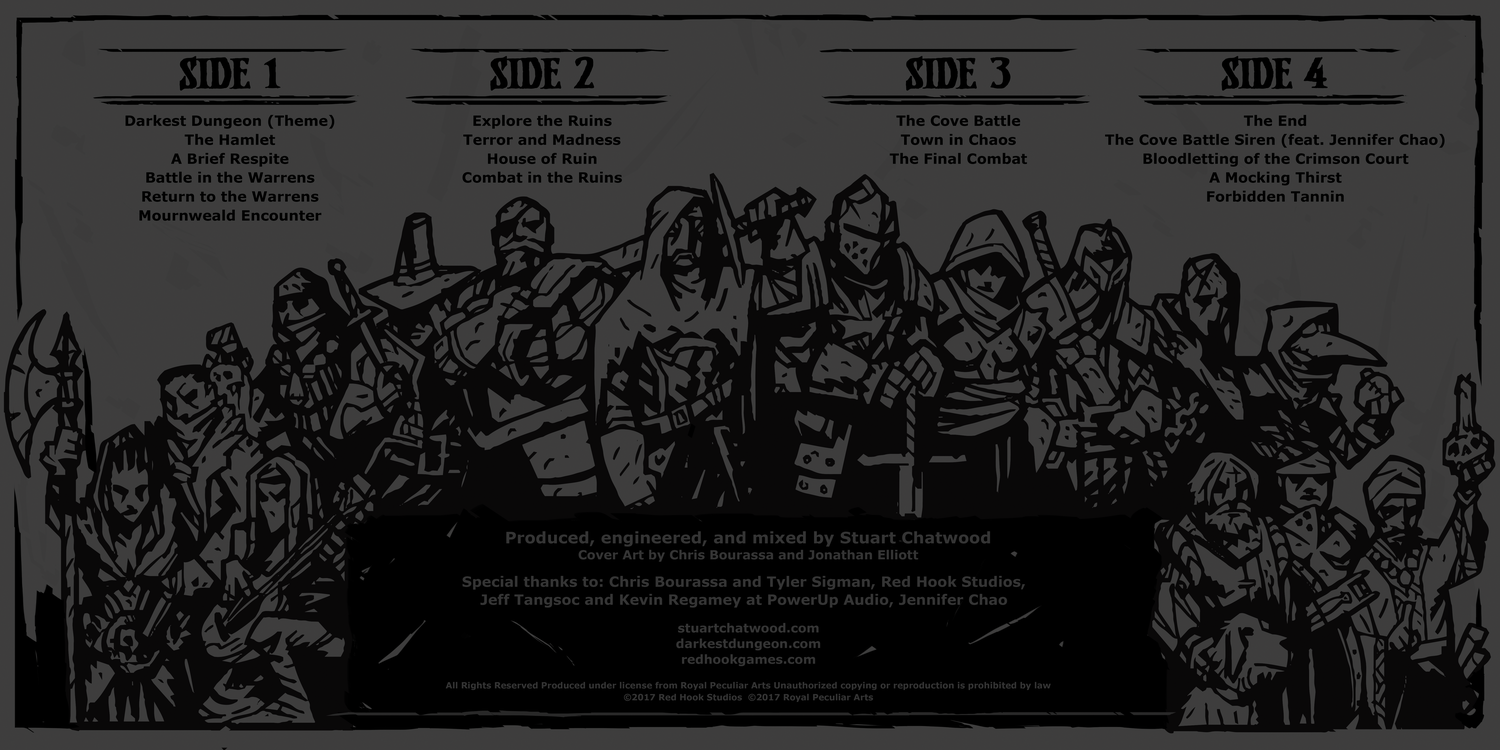 I'm also speaking with programmers on how to best get a bot setup on Discord so that you guys can spend more time playing and less time doing math and such to figure out how much damage you did, or how much health something is at. (As well as many other things) We may be sticking to pen and paper (or typing) for a bit but I hope the bot will make KoK even more enjoyable! n_n
In Kingdoms of Khoyee (MMO Tabletop RPG) → 1 yr ago Forum: Tabletop Roleplay
Put in a class system (which is rough and may need balanced more than likely) as well as changed how the intelligence stat works. It's basically an experience boost so that instead of just increasing health or damage if you want to increase how fast you gain skills in all the different roles, you would want to focus on intelligence.

Class
Classes determine how many stat points you get per level. There are ten levels per Class, except for S+ which levels up indefinitely. The lowest Class is D, with the highest being S+. The Classes are as follows;

I've also started on an NPC spreadsheet for generating NPCs. I want to make it so that one at the start we have hundreds of them, and then two a couple dozen or so come by ship every week or so, adding to the population. These will be random filler npcs but I'll also open it so that people can come up with their own to be added to the pool. 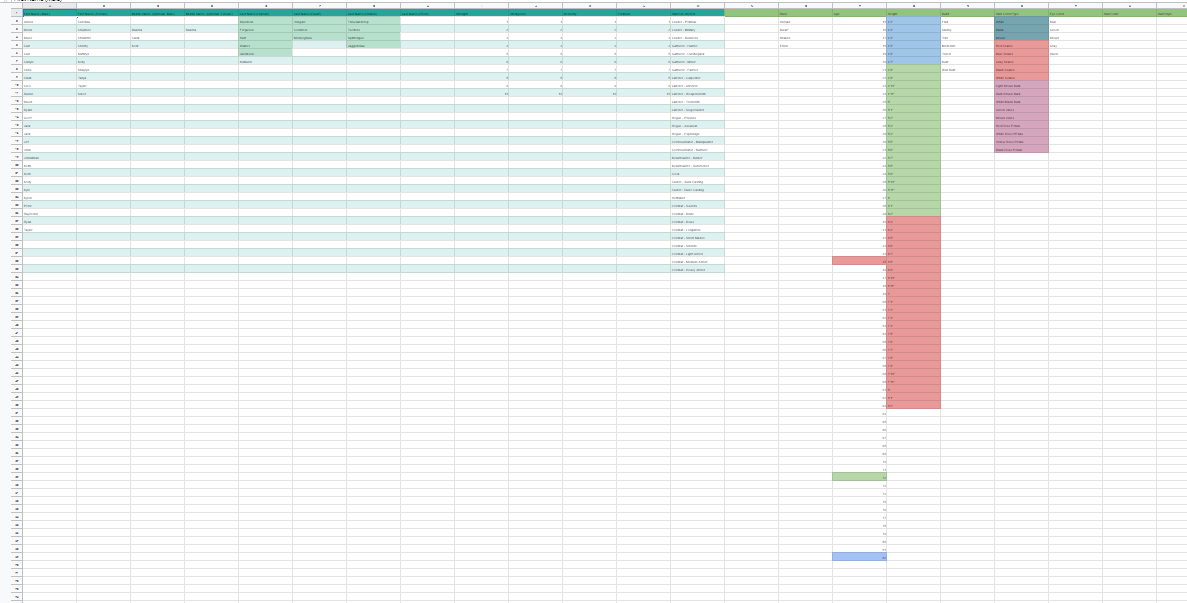 In Kingdoms of Khoyee (MMO Tabletop RPG) → 1 yr ago Forum: Tabletop Roleplay
Hey there everyone, I'm bringing KoK back and I'll need your help to do so! One of the main reasons I had to put KoK down before was because I was having to PM/GM for every session and it was taking 20-30 hours a week to lead just three parties. Despite having a ton of fun I couldn't afford to keep doing that and dropped KoK rather suddenly when life got in the way. I want to go about things a bit better this time and that means I'm going to focus on the design and development of the game and it's world and each party needs their own party master.

I'll be updating some of the information for the game, rebalancing some of the stats, but for the most part the game will play as before. I just need each party to have someone running the sessions that isn't me. I found through the 20-30 or so sessions I ran last year that a party of 5 or 6 is best, including the party master. So if we could get someone to volunteer as a PM for every 5 or so players that would be great!

Some things to look forward to with this revival of KoK...

• I'm going to be working with an artist who has a lot of experience with table top games as well so expect to have some more visuals this time around.

• I'll be creating some starting towns/cities to give players somewhere to call home without having to make their own. You still can, and I encourage that some of you do build your own settlements but it won't be required this time around.

• Party vs party PvP will be temporarily dropped for the time being until I have some tech to make it easier on people. Turns out getting a dozen or so people all online at the same time for pvp is rather difficult and slows things down incredibly. Fighting within your own party is still doable (though it's better to work together!)

• Kingdoms/Cities/Towns will have dedicated channels on Discord listing their details, such as what weapons and goods are available at a specific shop. The shops will also carry a set amount of silver which can be "collected" by players be it the owner, someone selling to the shop, or a thief. While most of what your party does should be within your own party channels, please at least copy and paste info such as buying or selling goods in the related Kingdom/City/Town channel so that the shops and such can be adjusted.

That's about it. The game will take a few days or perhaps even a couple weeks for me to get back up and running but if you're interested, now is the time to say so and let's get to forming those parties n_n
In Kingdoms of Khoyee (MMO Tabletop RPG) → 2 yrs ago Forum: Tabletop Roleplay
The KoK v0.1 Guidebook is finished with 170 pages and the first ever event is going on now! Details are posted below. Interested in playing KoK? Join the Discord channel!

Description
Convert the old Bandit Camp of Eastern Forest Region 5 into an Arena.

Surrounding Events
• No encounters in Region 5
• Creatures will launch an assault on the construction site every week until completed or destroyed. Those that enter the region can defend against 5 waves of increasingly more difficult enemies Tiers I-III. Once the waves are defeated the construction is safe for the week. If the creatures are left unchecked for a week, the partially built arena will be destroyed.

Rewards
Rewards are distributed on a point based system. Event participation awards points be it providing resources or defending against the creature assault.

Event Requirements
Speak to the "Arena Master" located at the abandoned bandit camp in Eastern Forest Region 5.
In Kingdoms of Khoyee (MMO Tabletop RPG) → 2 yrs ago Forum: Tabletop Roleplay
The Guidebook is at 151 pages and nearly complete. If anyone wants to join the Discord channel is waiting for you.
© 2007-2017
BBCode Cheatsheet