All Will Be One 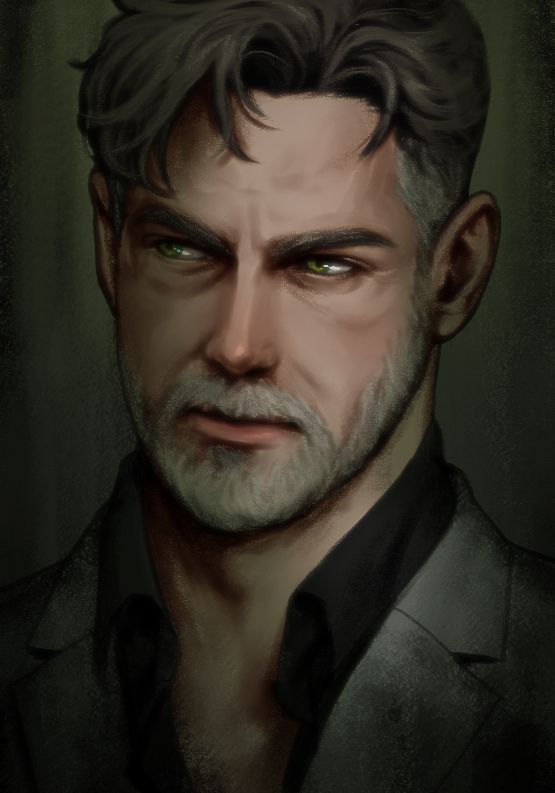 Personality:
Solomon Knox is the definition of a father figure, complete with a habit to exacerbate his own fears with over active imagination of what can go wrong. As a result, he gets protective (often overly so) of those around him. Quick with a smile, but even quicker with warnings and on the spot thinking. However, with all this, he often either acts too quickly, or not quick enough, teetering between overthinking and acting on the fly. More than capable with a fire arm, his thin wiry build does not loan itself well to physical up-front encounters. Often happy to operate as the wheels of an operation, the back-up, the 'phone guy,' and lore person. Has a habit of smoking cheap brand cigarettes, often going through a pack a day, and has a cough that matches.

Backstory:
Solomon Knox was not exposed to the world of the supernatural until his mid thirties, just over ten years ago. Having spent his post academic adult life as a researcher and lecturer of Greek mythology, he remembers when he was approached by a couple of students, notably not from his class, asking questions about minotaurs and what their weaknesses were. Thinking nothing of it, he gave them the information he believed to be relevant. He did not think of it again until one of the students burst into his room a few days later, covered in blood with a panic plastered across his face. As he slammed the door shut, something clattered to the floor from under the students jacket. An iron double sided sword called a Xiphos. The tool he had told them about. As Solomon Knox picked it up as the door flew open, a six foot six man bust through effortlessly. With a panicked startle, Solomon tripped and accidentally stabbed the man. With a roar, the assailant fell down, thick black blood pooling from him until he turned to dust. Not fully processing what had happened, the student ended up sitting him down and telling him about the supernatural. Ever since, he has tried his best to educate himself as much as he can, and share that with other hunters.

This become a small obsession for him, and ended up costing him his marriage. It was not long after the divorce that he picked up his smoking habit, figuring that something will kill him before the cigarettes do. He had never really run with a group of regular hunters before, often being a contact for many, but has decided to branch out and try to be more proactive in hunting.
In Supernatural Adventure → 14 days ago Forum: General Interest Checks

Great! Thanks for the submission!! It’s definitely still open, and I love your OC. Very much a mix of Garth and Bobby

Funnily enough, exactly what I was going for! XD

So, I find myself in a similar boat to you XD Used to be a lot more active on this site years ago, and find myself wanting to reignite that spark I think I have lost sight of. I too have had flake problems before, as well as sometimes slowed to a weekly response.

As someone with a keen understanding of pretty much this exact mindset, I'd love to possibly entertain the idea of jumping into something with you. Shake the dust off of the both of us as it were.

Looking at your list, I won't lie, I have a real jonesing for a superhero themed gig right now. Got to do something to keep those My Hero Academia feelings in check while waiting the new season!

Either way, always happy to just talk if you want that too :)
In Heroes and Villains : The Resistance (HAV : TR) → 5 yrs ago Forum: Casual Roleplay
Waiting for the roiling nausea wave to pass, Ken slowly righted himself. That girl who had 'rescued' him. He wanted to know how her abilities worked. Something like that could be very interesting if it could somehow be manipulated. It was his ultimate goal on Ignis as well. Learn how to control and manipulate her abilities. Since both Ken's and her abilities were born of energy, it stood to reason that there could be some logical leap to cross-collusion between the forces. But for now, there was the situation at hand.

Ken Vector had quietly followed along behind the group, deliberately not drawing attention to himself for once. He had an idea in his head. A half baked one admittedly, but half a plan was better than none. So he followed along. He didn't bat an eye at the death and carnage that had met him as they went through the breach. Those too inferior and insignificant to live deserve their fate of death. Death was the ultimate insult as far as he was concerned. Morons.

Bending down, he scooped up a gun from one of the fallen humans. Seemed like a standard pistol of sorts. Hiding behind cover, he sat there, careful to make sure no extremities were showing. A fire-fight like this was beneath him. Why dirty himself and mar himself with plebian weapons. He would let the other handle and deal with this, and then walk on the path they cleared for him. It was their right, no, their job, to facilitate this escape for him. He would do no such thing as make himself so base and vile as to stoop to their level. Firefights were for grunts.
In Heroes and Villains : The Resistance (HAV : TR) → 5 yrs ago Forum: Casual Roleplay
Ken Vector had been asleep when the alarm started blaring. After all, there was nothing to do in this hellhole other than sleep a broken sleep, eat the food not worthy of a dog, plot impossible escapes, or exercise in what little space he had. Admittedly he was surrounded by other cells, and could have spoken with the other inhabitants, but he looked at them all with disdain. Why bother himself with the plebiscite inferiors. They were beneath him, as were these monstrosities. Anything so weak and insignificant to rely on numbers did not deserve to be considered as intelligent life.

It was only natural, that with an ego and his sense of self importance, he was grumpy and irritable to be woken up early.
"Which one of you imbecilic simpletons roused me prematurely!?"
Ken was left slightly shocked when he saw a human standing before the cell, ushering him to hurry.
"I don't need your assistance, wench. I can manage this on my own!"
She hurried on, and as he watched, zapped the others out of their cells. He would never admit it, but he was slightly impressed. Only slightly.
"Okay, fine. Get me out of here you insufferable curr. Only reason you would risk this venture is because you need our powers. You cannot afford to leave any of us behind."
He stuck his hands through the bars.
"Do it, bit..."
He didn't get to finish his sentence before he was teleported out of his own personal hell of a cell, and into the hallway, cutting his sentence off as nausea roiled over him.
"Not getting used to that..."
In The Night the World Screamed: A Near-Future Magic RP → 5 yrs ago Forum: Casual Interest Checks
Very much interested.

Will the RP take place in one of the academies, ala Hogwarts? Or will we be out on the field, chewing ass and kicking gum kicking ass and chewing gum?
In Huntress looking for prey (FxF or MxF) → 5 yrs ago Forum: 1x1 Interest Checks
The Merc x Soldier idea looks interesting. I could be down for playing a Merc.
© 2007-2017
BBCode Cheatsheet