STATUS: On RP Hiatus. Will be back eventually... 12 mos ago

12 mos ago
Current On RP Hiatus. Will be back eventually...
1 yr ago
Free virtual benefit concert tonight: TheFarmMustGoOn.com
1 yr ago
Good luck, @blindwoofer. Mine likes to wash his paws off in his water dish.
1 like
1 yr ago
@Crab... see if you can find out what she's interested in. Then ask her about it. No flirting need be involved to just break the ice. :)
1 like
1 yr ago
Amazing how many sudden epidemiology experts there are in the world
2 likes

Wild (and sometimes weird) west and medieval fantasy games with an 'old-school' D&D feel are my favorite.

In real life, I'm a software engineer and wanna-be farmer. I have a little garden and some chickens that like to destroy my flower beds. But I like 'em anyway and they all have names. ;) Sometimes they lay me some breakfast.

Other hobbies include dog agility and archery.

Suddenly the mystery of where their bodies had disappeared didn't seem like so much of a mystery after all. The very idea sickened him. To be used such. It was unholy. Evil.

He swallowed hard as he considered her story. And her plan. "He most certainly has more. Or is making them now," he commented as his brow furrowed in thought. If the old man had taken their bodies, then at least he should be busy for a while, right?

"Let us not wait for the moon," he said (still whispering), keen to be gone sooner rather than later. He held up his lantern, the flame burning brightly, "Fire set to the curtains and around to the rows of books would soon spread and consume this mansion, depriving him a place to work his dark ritual."

Hopefully, it would kill the puppets too... if killing something that was already dead was even possible.

He wanted to grab her hand and just drag her out of here. But something about the way she'd stated that made her seem more mature and wiser than her 9 years would suggest. And it sent shivers down his spine that 'everyone else' included his own family.

There was magic at play here. Sohn had never personally encountered magic before tonight, but what else could that purple creature that poofed into dust have been but a being born of magic? Her words seemed to hint at even more of it.

As Claribel's voice dropped to a whisper, he lowered his to match. "What is he doing? How can you stop him?"

In Search of the Abandoned Mansion - Creative Thinking Fantasy RP → 1 yr ago Forum: Casual Roleplay
Sohn felt a huge sense of relief as the dark figure was revealed to be Claribel. But he wasn't about to let his guard down until they were both well clear of the mansion. Old guy? What old guy? That was worrying.

He shook his head.

"Fortuna, down," Sohn ordered and immediately the dog's demeanor changed from growling to more submissive as she laid down, though was still very alert to their surroundings.

"Your father sent me and Fortuna here to come find you. Ready to go home?" He asked, transferring his staff to one hand and extending the other toward her, fighting the voice in his head that was telling him to just grab her and make a run for it. But, like a lamb, if he spooked her, she might run and hide and then he'd be much longer trying to get her back.
In Search of the Abandoned Mansion - Creative Thinking Fantasy RP → 1 yr ago Forum: Casual Roleplay
Sohn took a single step into the room, eyes scanning left and right and ... whoah... what was that? He did a double take toward that row. The deep shadows made it hard to see and he held the lantern up in an effort to cast more light in that direction. Was it moving? Oh... crud... it was moving.

The little hairs on the back of his neck stood up. As did Fortuna's as the dog growled softly.

"Claribel?" Sohn said, though at the same time he was repositioning his grip on his staff and taking a defensive stance until he could make out better what it was.
In Search of the Abandoned Mansion - Creative Thinking Fantasy RP → 1 yr ago Forum: Casual Roleplay
The missing bodies of his companions was, indeed, disconcerting. His resolve wavered, but he pressed on before he could let the wild theories going through his mind stop his feet.

As he reached the mezzanine Sohn paused to listen again as he tries to take stock of which door is most likely to lead to the area above the dining room where he heard the 'thunk'. (Center, if I'm envisioning this right?)

"Find it, Fortuna..." he ordered the dog, letting her check the door to the right since it was closest. Unless the dog made a fuss here, he'd move on toward the archway. Behind here should be where the thunk had come from. His heart beat harder and he took several breaths, trying to mentally prepare himself for whatever he was going to find inside.

Similar to what he'd done down downstairs, he tried the knob, then took a step away and used his staff to push (or pull) it open.
In Search of the Abandoned Mansion - Creative Thinking Fantasy RP → 1 yr ago Forum: Casual Roleplay
Oh, thank the gods... a way out of this death trap. Sohn made his way across the room toward the broken window, sparing a few glances at the piano, chairs, and other doors along the way. He held the lantern up, checking the window ledge and frame on the inside, looking for rot. Was this broken just recently? Or has the weather and elements had time to start destroying the interior?

Then he looked to see if they were at ground level? Would escaping out that broken window be trivial or was he dealing with a drop that could break an ankle or worse?

He knew he had a decision to make now. And nearly every part of him was screaming at him to just run. Tell the mayor to burn this place to the ground. But what if that 'thunk' had been Claribel? Frightened and alone? If she'd seen that purple devil, she might have just been too scared to call out. Could he really live with himself if he left her to die?

He knew it would haunt him. Cursing internally, he knew he wasn't leaving. Not yet.

First thing first... he'd take the time to ensure getting out here would be quick if needed - clearing away broken glass that could cut someone. And set up chairs as steps both inside and out with the idea that he might be carrying a little girl when he came this way again.

Once that was done, he'd backtrack the way he came through the kitchen and dining room to the foyer (avoiding the hole in the foyer floor) and go up the stairs...
In Search of the Abandoned Mansion - Creative Thinking Fantasy RP → 1 yr ago Forum: Casual Roleplay
Fortuna, still attached to the long length of rope secured around Sohn's waist, entered the room first. After the imp, she was as on-edge as her master.

"Easy, girl..." he whispered to the dog as he cautiously entered the kitchen, though he needed the reminder just as much.

He did NOT take the time right now to investigate the shelves or their contents - dishes and cutlery were the least of his concerns. But he did pause a moment to try to formulate the beginnings of a rough map of the place in his mind. 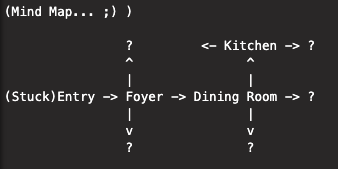 The door to the right seemed more likely to lead to the back of the house and, hopefully, an exit. So they moved cautiously toward the right door. He did not swing it open immediately. Rather he paused and listened. Then put his ear against it and listened again.

IF they still heard nothing, he'd try the handle, opening it only a crack before stepping out of the way and pushing it open the rest of the way with his shepherd's crook. Paranoid? Definitely. But a little paranoia seemed healthy right about now.

In Search of the Abandoned Mansion - Creative Thinking Fantasy RP → 1 yr ago Forum: Casual Roleplay
Sohn tucked the knife into his belt. The coin was no great wealth, but a small piece of metal might come in handy, so he took that as well. While figuring out how to carry the apples, he heard the THUNK and automatically looked up and grabbed his staff.

It was a strong reminder to not tarry here. Was it Claribel? Or something that had EATEN Claribel?

Finding a way out was still his priority... maybe even MORE so now. After that he would re-assess the risks to continuing his search. Still wondering if there might be an exit from what he assumed was the kitchen, Sohn used his shepherd's crook to fully push open the door that Magolor had started to open. It was hard not to think about the imp's knife (at least Sohn assumed it was the imp's knife) striking him down and Sohn kept his eyes away from the two bodies on the floor.

When nothing happened he hesitantly poked around the doorframe with the lantern to look inside.
In Search of the Abandoned Mansion - Creative Thinking Fantasy RP → 1 yr ago Forum: Casual Roleplay
Sohn turned in a circle once the imp turned to purple dust. Was it dead? Or was it going to reappear behind him? He did not search long though before he grabbed Eliel by the shoulders and dragged him away from the death door. "Eliel!" he tried, checking the boy's non-existent breath and then searched for a pulse.

A curse word escaped him as he realized his companion was well beyond his help, if not already gone. He did the same then for Magolor. Then fell back on his butt as it became obvious they were both dead.

Belatedly, fear set in. In less than a quarter of an hour, the party had gone from 5 down to 1. Well, 2 if Fortuna counted. "Here girl," he said, stroking her head several times as if he was calming her when in reality it was the other way around. "He get ya bad?"

The scratch didn't look to be that bad. Certainly not bad enough to prioritize above finding a way out of here. He took in a deep breath and then let it out slowly, regaining his composure.

Then quickly searched through the pockets of both Eliel and Magolor. He didn't like to think of himself as a thief. But desperate times called for desperate measures. And if they had something that might help keep him alive, he wasn't going to pass it up.
In Search of the Abandoned Mansion - Creative Thinking Fantasy RP → 1 yr ago Forum: Casual Roleplay
Sohn could not help the scream that left him. Not one of fear even though he would likely feel that too in another few moments, but one born of anger and desperation at seeing his two companions slaughtered before him. "NOOOOO!"