I don't love you.
I just want all your money. 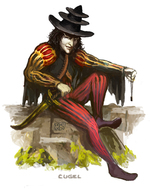 Earlier, Vodalus had learned that she was a woman. That made it worse.

The reptile, from thin air, procured a sword in the space of a breath. The priest’s horror was now fixed on this blade, to the hilt of which was affixed a cyclopean eye. Both blade and eye stabbed towards his person– and there was a lot of person to stab, should it come to that.

Vodalus winced violently, then closed his eyes as if waiting for a storm to pass overhead while the lizardfolk blasted him with a threat. At some point, the danger passed. Vodalus shuddered, then rose off the floor.

First, he inspected himself for injuries. He had broken something, and perhaps several other somethings. Though, by all rights, he should have been dead.

But there was the horse. He glanced over at it. The poor creature was peppered with bruises and neighing raggedly.

Better the beast-of-burden take injury than a valuable asset such as myself.

Next, he inspected his surroundings.

It turned out that there was little to inspect. A look from top-to-bottom would have been neck-straining and unnecessary, but a survey from side-to-side was simply mundane. It was a box-shaped chamber, whose contours were illumined not wholly yet largely by the dome of torchlight someone had brought forth.

This was not an unpromising start. It was more promising certainly, than torture, interrogation, and confession at the hands of religious fanatics.

Still, Vodalus was not eager. He slid to the rear of the party. There, his towering, pulpy frame was anything but inconspicuous, and took up the space of almost two others.

He would have been content in this rearguard, offering moral support and smiling affirmations of his priestliness, had he not heard a heavy snort to his left. Vodalus turned.

The horse spat on him.