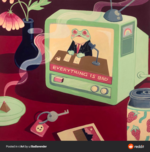 In The Dweomer of Akkad → 22 days ago Forum: Tabletop Roleplay
The Yeek warrior stands at the halfway point of the stairwell. These guys were a serious threat to fighters like Makeen and Etor, so a team-up would be the most appropriate action. Etor smiled as he developed a report with the camel rider.

Etor: I'll take good care of it. The weapon... Hey Makeen! Let's take this guy down.

Etor had been very lucky in his battles. He was not unaware of this but thought nothing of it going into the encounter with the yeek warrior. Maybe Makeen and Etor could do a cool team-up move. With that thought in mind, Etor missed.

The Warrior sneered, it had the high ground and the upper hand. While it might die the warrior took solace in the fact that it would take down one of the intruders before it passed into the next world. The yeek was delighted to kill someone so young as well and, with a thrust of his spear envisioned the young spearman's body attached to the end of its gnarled piece of wood. With this in mind, the yeek warrior also missed.

The two warriors stared at each other, while not embarrassed, certainly surprised. However, of the two, only Etor smiled.

Etor: Save some treasure for me! The rest of us got this!

Etor moves 1 tile to 25-20. He attacks yeek warrior#6 but misses
In The Dweomer of Akkad → 25 days ago Forum: Tabletop Roleplay
Things were progressing nicely. Everyone was gathering together to enter the ruins. They would make quick work of the enemies that were left behind. Iddin can to heal Etor and it was always much appreciated. Whatever perception people had of Iddin as weird or off putting was not shared by Etor. Etor's father had always told him that God is not present in the battlefield but this man in front of him was a contradiction to that ideology and the he respected that.

Etor wasn't a religious person either, but this Zuzu deity must be something special to find someone so devoted. Everytime he was healed the young spearmen had a better opinion of Zuzu. He always felt somewhat insulted by the the words said during the healing process but this was the most conversation he's had with anyone in this group so he chalked it up as a win.

Etor: Thank you Iddin. Tell Zuzu I am eternally grateful.

With renewed vigor, Etor rushed the remaining yeek, stabs under it's ribs and slams it to the ground in one swift motion. Etor motions to Zarif.

Etor moves 4 tiles to 25-21. His attack killing yeek skirmisher #5
In The Dweomer of Akkad → 1 mo ago Forum: Tabletop Roleplay
Ofik:Again!

Etor:But father! I've done this over a hundred times.

Etor:Yes father! ...a sword is cooler than a lance though.

Ofik: Etor. Your battle acumen will grow as you do but you have a darkness in you. Darkness that must always be kept at bay. Death and bloodshed could further plunge you into the abyss. The long spear provides that distance. As "cool" as a sword may be you should always attack first then counter when they close the distance. The key to battle is to hit them more than you are hit.

The Ensi had gotten away and the group had to rush to save him from being ambushed. The two Hellions who came to back him up made him feel better in their own way. Zarif as a scolding but relieved leader and Siris by laughing off any offense that stood before him. The young spearman pretended to be too busy concentrating on the yeeks to hear the cleanup duty remark that Zarif made. However, the flop sweat that followed most definitely gave him away. The yeek warrior that the confident Siris had struck down would've been the end of Etor.

As Zarif rides off in what Etor considers a really cool fashion, he feels a tinge of embarrassment. Etor weakly raises his hand towards the mounted rider.

The short spear that Zarif gave him was lighter and easier to maneuver, it was a better weapon for him to use and yet he had always followed his father's wishes to use the heavier long spear. Had his father been stifling him due to the fear of the darkness within Etor? As Siris boasted further, Etor had felt something stir within him. It wasn't an emotion it was something more, something from within, and from the world unseen. He put his hand on the shoulder of the yeek in front of him, barely alive but too base to reconsider any other course of action. He drove the short spear through the weakened yeek, its limp body slumping onto his breastplate, it's blood smearing onto the fledgling spearman. The yeek's last breathe feed whatever was stirring within him or it soothed it, the young spearman couldn't tell.

Etor:Thanks Siris. I dont know what I would've done without you and zarif.

Etor stays on 21-21 killing yeek #5
In The Dweomer of Akkad → 1 mo ago Forum: Tabletop Roleplay

The wounded yeek warrior advanced with reckless abandon and Etor made quick work of him. The young spearman let out a small sigh as he looked down on the disgusting creature.
Etor: He probably wanted to go out that way.

As the young warrior looked around him, he noticed two things. The rest of the hellions were quite some ways away and the robed Yeek was doing something peculiar. Etor didn't understand the words but he recognizes the impact it was having around the faux priest's immediate area. Etor thinks to himself "This cannot be allowed to continue."
Perhaps the previous victory had emboldened him, maybe it was reckless youth, or perhaps the mysticism that the Ensi was expelling called to Etor. Nevertheless, the young warrior ran towards robed yeek, determined to strike it down. When he noticed the priest was barely hanging on Etor came to a sobering conclusion. He was soon to be surrounded.
Etor: Damn.

Etor rushes to 21-21 and attacks the Yeek Ensi to for 7 damage.
In The Dweomer of Akkad → 1 mo ago Forum: Tabletop Roleplay

Zarif made light work of the yeek and Etor understood that they were in the thick of it.
Etor:I'll cover you.

Etor puffs his chest and makes way for the lone warrior yeek. Not breaking eye contact, Etor shows the warrior all the respect warriors show each other when on the battlefield. While Etor shares Ashur's contempt for the Yeek, at the end of the day the victor is whose ever better on that day, and that's something to be respected.

In The Dweomer of Akkad → 1 mo ago Forum: Tabletop Roleplay

Etor: Traveling on Salador was a dream come true. A dream that was actually harder to stay on then previously perceived and that let out the occasion fart accompanied with a moist plop on the ground behind it. None of that mattered to Etor. He was excited to be on Salador, brushing the beast's coat with his fingers and at the same time intently understanding Zarif's words. If one could see him one would think he was talking notes to be tested on how well he knew the members of the hellions. His father had always told him to enjoy the moments leading into battle as they are "the building blocks to victory", but his father was also ambushed and brutally murdered, so Etor learned to stay vigilant on his own.

Etor: "Thank you for the ride. I'll back you up! No problem."

Etor is always carrying his bronze longspear as he has no place to store it. He awkwardly motions a ready position to let Zarif know he's all set for whatever may come.

Etor is let down from Salador on 14-24, right behind Zarif.

In The Dweomer of Akkad → 1 mo ago Forum: Tabletop Roleplay

Etor was elated that the group liked his idea. However, the ragtag group has shown that they aren't well versed in collaborative encouragement. With that fact in mind, Etor nods to himself and makes his way towards the clearing.
Etor: "Great! Thank you Makeen. I'll move towards the end of the tree line and follow your lead."

Etor awkwardly shuffled past Lyun without saying a word. Lyun and Etor had a good relationship and he didn't want to ruin the bond they had with each other by speaking to him.
Making his way past Ashur he managed to give him a nod but not the direct eye contact that Ashur wanted. Ashur's eyes always give off the vibe that say "You think you're better than me?". Etor's base tongue couldn't accurately surmise Ashur's actual thoughts. He'd probably call him a witling or a malapert or something. Ashur is the only one who makes him feel like a teenager.
The short walk felt, which felt infinitely longer than perception should allow, ended with Salador. Etor attempted to put his hand on Salador, a goal he's had for the last 2 weeks, but the beast exhaled at the perfect moment to startle the young spearman. Awkwardness aside, Etor looks forward to the battle ahead and out at the structure ahead of him.
Etor:Cool...

Etor moves SIX tiles to 9-32, on the other side of Zarif.

In The Dweomer of Akkad → 2 mos ago Forum: Tabletop Roleplay

Etor: "Easy Kastilus. Let us not get ahead of ourselves. We’ve all had a long trip. Spending some time talking about how to do things won’t kill us. In fact, it will have the opposite effect. These are Yeeks we are talking about." He says in a way that attempts to convey seriousness but also lets everyone know he has no clue what Yeeks are. Hoping he helped settle the building tension between the client and Ashur, Etor flashes a sharp tooth smile at them both.

As he begins pacing back and forth to think of an attack strategy, he is staggered by the horrendous smell coming from the ruins." Agh. Grossss. Lets just split up and make a three-pronged attacked?" Etor quickly remembers his age and position within the crew and quickly tightens up. Unless anyone else has better ideas of course!
In The Dweomer of Akkad → 2 mos ago Forum: Tabletop Roleplay
Etor
Fledgling Spearman

In Introduction to this website → 2 mos ago Forum: Introduce Yourself
Hello. This website is very cool. My initial account attempt got banned immediately so that was odd. I still made it though!
© 2007-2017
BBCode Cheatsheet