In Frontier of the Dead: A Western Horror RP → 10 mos ago Forum: Casual Interest Checks
Im game
In The Black Undeath → 1 yr ago Forum: Casual Roleplay
It is apparent Nothing I pitch is going to be good enough... and I think alot of it has to do with me asking if you were expecting everyone to write a short story fore their background. And there was no clear laid guidelines what you wanted included or expected in a background... you request things vaguely you get vague in return.... But it is what it is. I am done trying to make someone I don't know or will never meet face to face happy. I will go RP in my other roleplays where people actually elaborate and go into detail as to what they expect in a CS. to those I was looking forward to playing with. If you want to catch me else where inbox me I'll hook you up with other RPs I am in! and to those I wasn't looking forward to rping with. Shalom!
In The Black Undeath → 1 yr ago Forum: Casual Roleplay
Well because her background as an individual from where she is from does not matter! it is clan focused! A Samurai's duty is to her Clan first, her State second the less fortunate third and finally her own person lastly! Hence the vague nondescript history!
In The Black Undeath → 1 yr ago Forum: Casual Roleplay
Name: Shiba Hiromi
Gender: Female
Appearance:Image Included. 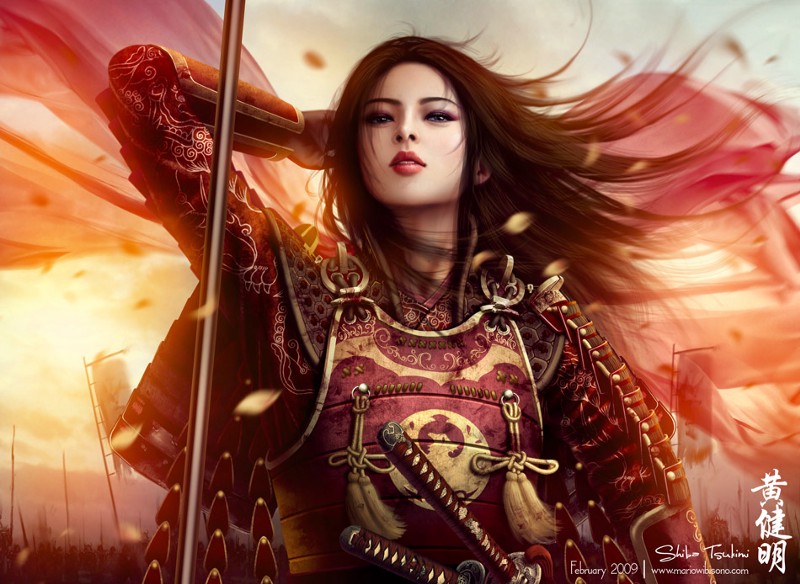 Age:24
Fighting Style(s): Kenjutsu, Kinenhi, Kasoku Sekai,
Equipment: No-dachi, Katana, dual sheath belt, Clan Samuria armor.
Biography:
When the Phoenix Clan was young, there was great tension between the family of Shiba and of Isawa. Isawa resented the Kami being above him because of an accident of birth and the followers of Shiba resented Isawa for his failure to properly respect the Kami. Shiba knew that the tensions within his clan were reaching a breaking point, yet he did not know how to solve the problem.

The answer finally came to him one night in a dream. Shiba had a vision in which he was visited by a magnificent fiery bird. The bird explained that it was composed of all five elements, and was the whole universe. The bird also told Shiba that it and he were the same, saying "You are not separate, but one and the same. I am the reflection of your soul just as you are the manifestation of mine. We are death reborn, immortality through a thousand lifetimes. We are the cycle of the cosmos, spinning in patterns as old as time. We will die in flames, only to rise again and again until the sky itself collapses. We are the Phoenix -- the Eye of Eternity."