The Impatient Patience of Fulfilled Nothingness

STATUS: I decided it was time for a new look. How do you like it? 4 yrs ago 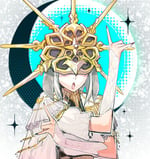 4 yrs ago
Current I decided it was time for a new look. How do you like it?
4 yrs ago
Weekend was busy, hot, and tiring. I have stuff to do, and this week is looking to be a difficult one. This is going to be a VERY uncomfortable part of my life.
4 yrs ago
DAMMIT! SON OF A-! One of my favorite fanfics is stopping, because apparently it's breaking rules. Not only that, The fanfic I'm working on will have to stop too, since it's similar! This sucks! T-T
4 yrs ago
Must...finish...fanfic...Must...not...look into the YouTube comment section of Death Battle...Must...not...get...sidetracked...
1 like
5 yrs ago
I got into another online argument about shipping again! I said that I ship Blaze with Silver, and they said that she'd be more likely to be in love with Sonic. I can't see how.
1 like

I've got a handful of years experience Roleplaying here and elsewhere, so don't think me a rookie! My Avatar once looked like a part of some sort of time-theme, but that's just Chronos after he was brought back to life and upgraded! My more favored avatar is either Dimentio or the Azure Flame God, but how does one resist a clock face?

But that's in the Past. Now it's a pic of Gwyndolin, the Dark Sun!

Prepare yourself for the Persona of the week/Month/Minute/Whatever! Try to guess which Persona it is when you see it in my Signature! This little tidbit starts within a week!

My return to The Guild could mean many things! A new RP, a revival of an old idea, my participation in the arena as a Low-Rank Grunt, but most likely my return means that I'll participate in the more recent RPs!

With that said, remember to eat your porridge and limit your fire usage (we are drowning after all)!