In Lost Realms of Arann: Northmarch [D&D 5E] → 1 yr ago Forum: Tabletop Roleplay
Tergo returned her smile and gladly shook her hand. "Well met, Quilrith Vambash." He said. "Happy to have you along, as you could probably tell from my lackluster performance in that brawl, I'm not much of a fighter." He joked, idly scratching the back of his neck. Tergo's face once again lit up as the topic of conversation shifted to goblins. He began to speak quickly, "Well, I've always been interested in goblins, they're quite interesting creatures, when you take the time to get to know them. You see, I'm a scholar who specializes in the study of goblins!" He said, his voice booming with pride. "While my knowledge of goblins is quite extensive, I know very little about the clans that inhabit this area, and as far as I know there is little to no written works covering the goblins that live here. That's why I've come to the Northmarch, I hope to be the first goblinologist to write an extensive history of the goblinoid peoples of the area!" He finished his short speech and smiled, finding himself out of breath and realizing that he had somehow managed all that talking without taking a single breath.
In Lost Realms of Arann: Northmarch [D&D 5E] → 1 yr ago Forum: Tabletop Roleplay
He shot Durwith a dirty glance in response to his 'flies to crap' analogy and then turned back to the guardswoman. "Well, yes, killing them is sometimes necessary, I suppose." He said, reluctantly. "But, I'm more in the business of studying them, how they live, what they eat, who their leaders are, etcetera."

After the dragonborn had offered her assistance in rescuing the girl, Tergo looked up at her (as best he could, she was nearly twice his size after all) and let a friendly smile form, "Well, looks like we'll be working together, if you don't mind, that is." He said, very glad that someone else had volunteered to find the girl, he wasn't exactly confident in his ability to handle the job on his own.
In Lost Realms of Arann: Northmarch [D&D 5E] → 1 yr ago Forum: Tabletop Roleplay
Tergo straightened himself out, and slid his hammer back into his belt, glad that no one appeared to have noticed him completely miss his swing. He returned the nod and smile to the dragonborn and then looked to the halfling with more than a hint of doubt in his eyes. Whether or not he had tupped the man's wife, didn't matter now, but Tergo still wasn't sure he believed his plea of innocence.

He had reached the center of the crowd just in time to see a dragonborn woman standing between the men and their target. He sighed and stepped forward, taking position at the dragonborn's side. "Good day, sirs!" He said, bowing respectfully. "My name is Tergo Orryn Pip Veris Scheppen, it is a pleasure to meet you. Though, we seem to be meeting under less-than favorable circumstances." He allowed himself a smirk, and continued. "I'd like to know, if you wouldn't mind me asking, exactly why you've interrupted our fine evening?"
In Lost Realms of Arann: Northmarch [D&D 5E] → 1 yr ago Forum: Tabletop Roleplay
Tergo marveled at the diverse grouping of people that filled the tavern, his eyes lingering for a moment on the Kenku man, glad to finally be able to see a member of the strange avian race in person, rather than just the depictions he had seen in his books on the races of Arann.

He smiled at the woman, trying to match her cheerful attitude with his own. "I'd like a fillet of cod with a side of potatoes, and a glass of white wine." He ordered quickly, he always ordered the same thing when he ate at places like these, it made things easier, and the simplicity of the dish made it less likely they'd screw it up. "Oh, and do remember to bring some bread." He added politely. With a nod of his head he indicated that his order was finished and turned his attention to the halfling fellow, humming along to his melody as he patiently waited for his food.
In Lost Realms of Arann: Northmarch [D&D 5E] → 1 yr ago Forum: Tabletop Roleplay
Tergo allowed himself a sigh of relief as he stepped onto the docks of Teres, glad to be finally off that damned boat. He had always hated sailing, it made him sick, so a month and a half long journey across an ocean was certainly not what he would call a fun experience. He looked over his things, checking to make sure he had grabbed all his luggage (most of which was carefully shoved into a backpack) and began walking towards where he had been told he could find a tavern.

He made his way across the busy dockyard and down the dimly-lit streets of Teres, finally finding his way to the Tavern, as it was apparently called. Tergo scoffed at this, muttering to himself, "Not a very creative name." But, at least is was a warm place to sleep, bland name or not.

He raised an eyebrow as he watched a drunken dark elf stagger off down the street, a man and a tiefling woman close behind him. He shrugged to himself and paid it no mind, stepping into the tavern, a smile on his face.

He took a seat at a booth and relaxed, enjoying being able to sit down without being jostled by angry waves. After savoring the comfortable feeling that solid ground provided for a moment, he raised a hand to beckon a serving maid over, realizing just how hungry his journey had made him.
In Lost Realms of Arann: Northmarch [D&D 5E] → 1 yr ago Forum: Tabletop Roleplay
Tergo Scheppen 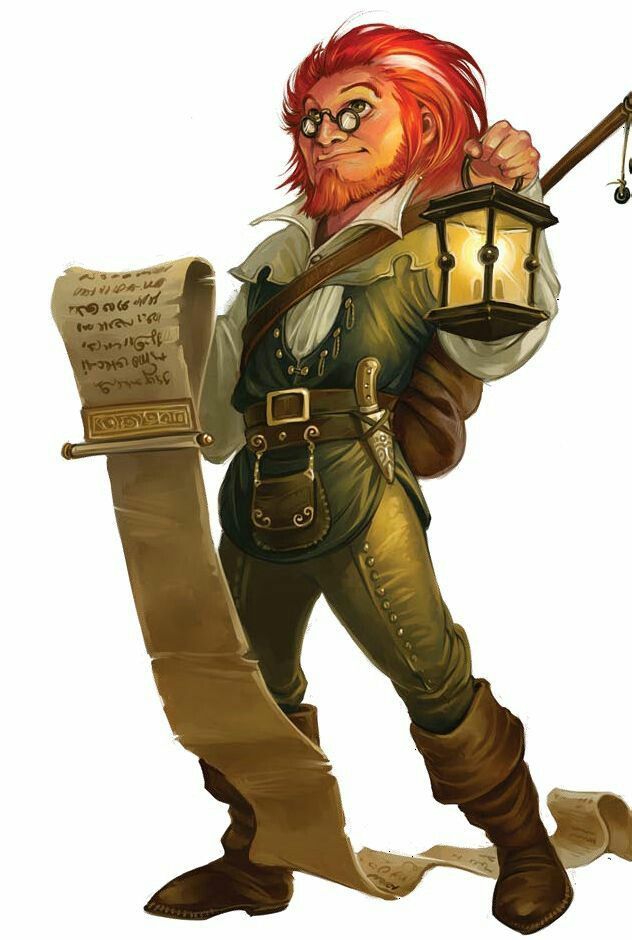 Backstory
Tergo was born to Orryn Scheppen and Binda Tells half-past twelve on a Sunday in the port city of Binwich. Soon after his birth, a celebration was held, and he was given his names: Tergo Orryn Pip Veris Scheppen, all of which had been apart of his family for centuries.

His life was comfortable, his father was a well-liked, and well-respected cobbler for the local aristocracy, and his mother was the daughter of a renowned business man who had developed a shipping company out of the city's port. His family's wealth opened up many opportunities for the young, and ambitious gnome, and he took full advantage of them.

From the age of three till he was seventeen, he was educated by a private tutor, who introduced him to what would become his two greatest passions: history, and magic. Over those fourteen years, Tergo devoured books on fallen kingdoms, great warriors, epic battles, fearsome creatures, powerful spells, and more, his hunger for learning never satisfied. One such creature caught his attention, and would stay fixed in his mind for the rest of his life: the goblin. Small, dastardly-clever creatures, the race of goblins interested Tergo more than any other subject.

When he turned seventeen, he applied for admission to Binwich University, to which he was accepted, and began to work on his doctorate in Goblinoid studies, which he affectionately calls, goblinology. His time at university was difficult, largely due to the fact that the field he was trying to enter was nearly non-existent, and gathering together what disparate information there was to be found on it was quite a Herculean task, costing many a gold piece. There was also the issue of finding a professor knowledgeable enough on the subject to teach him. Eventually, Tergo was able to find a professor who specialized in Goblinoid studies, and wrote to him, offering him quite a large sum of money in exchange for instructing him. Glad to be offered any kind of work (which for a professor of that field is certainly sparse), Dr. Venin Piric quickly packed up his things and made haste for Binwich.

The next eight years of Tergo's life were devoted to studying the cultures of various goblin tribes, their leaders, religious practices, tactics and nearly every other facet of goblin life. He also spent those years expanding his knowledge of the arcane, spending hours researching, and practicing spells, and listening to lectures put on by the university on the subject.

Despite being able to garner a fairly respectable understanding of goblins, he always felt disconnected from them, and dreamed to one day study a goblin clan up-close. When he finished his doctorate, he decided he would do just that, and set-off aboard one of his grandfather's boats heading to a region called, the Northmarch.
In D&D 5E West Marches → 1 yr ago Forum: Tabletop Interest Checks
I'd be interesting in playing too.
© 2007-2017
BBCode Cheatsheet