STATUS: So, I'm on some sort of official and consistent schedule now. Which is nice, unless life decides to screw it up for me. 2 yrs ago 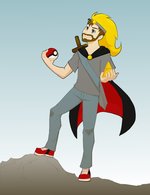 2 yrs ago
Current So, I'm on some sort of official and consistent schedule now. Which is nice, unless life decides to screw it up for me.
2 likes
4 yrs ago
Hooray for being back in the swing of things! I'm back to a mostly regular upload schedule for my LP's, and I can even stream now! Hoorah!
5 yrs ago
RIP Satoru Iwata. Gone, but never forgotten. You will be missed.
2 likes
5 yrs ago
Might be moving soon. What fun
5 yrs ago
Now that Superstar Saga LP is done, time to get OoT Master Quest finished!

I... am the Master Gamer, rawkhawk64. This also happens to be one of my internet hidey-holes. I enjoy all manner of Roleplays, usually fantasy or sci-fi settings. I also do fandoms. I'll usually check out any Kingdom Hearts, Naruto, or Pokemon RP's. I'll also check out other fandoms I like, but those usually have to be done well.

As for what I do outside the Guild, the big one is streams. You can catch me at twitch.tv/rawkhawk64.

Hope to have fun RP'ing with you!

Brutus nodded as the planning was coming together. "Alright, then. Fortunately, my tags can last for a while. The only thing we need to figure out now is when and where to strike. This plan needs to be in our odds as much as possible." Brutus said. He looked over to Moira, eyeing the weapon the being now held. He felt shivers down his spine. Whatever that thing was, it didn't belong on the mortal plane.
In Royal Rumble! → 6 mos ago Forum: Casual Roleplay

Brutus had been listening to everything that was going on. He hadn't bothered to answer Andras' questions about the ball or his thoughts on her story. He honestly wasn't sure what to think on that. In truth, he knew very little of Andras' powers or how they worked. She'd only explained a small bit, back when she first proposed a 'Mana Contract' between them. So, as to what had transpired, he couldn't say how real or imagined it was.

As for the ball, he'd likely be forced to go by someone or other, so it'd be less troublesome to just go.

It was at this point that Diana had entered and explained what was going on with someone called "the Fallen One". Brutus stepped forward. No way in hell was anyone gonna go after one of his friends when he had the power to stop it. As he thought on how to voice these thoughts, Brutus held up a hand, watching electricity arc back and forth across between his fingers.

"Well, you certainly seem to be in better shape when I last saw you. I wouldn't have taken you for a student from Mephisto's, though." Brutus said to Diana, the barest hint of a smirk on his face. "I never did thank you for that boost during the cultist attack. Without it, I feel we would have fared a lot worse. So, as thanks I shall help you. Besides, despite how troublesome she is, Andras is a valued ally. Her skills are an asset to what we do. So, count me in. I'll help however I can."

As he finished his declaration, Brutus had to wonder when he'd started throwing himself into the thick of things he'd normally leave be. Was it during the apartment job? The cultist attack? Meh, that was an issue that could be sorted out later. He just hoped this didn't turn into a hero complex. That'd be too troublesome.
In Royal Rumble! → 9 mos ago Forum: Casual Roleplay

For Yuuto, his day had started out normal. Well, as normal as it could when he was dealing with a couple of cracked ribs courtesy of his training last night. When his father wanted to punish him, he made sure that his son could at least gain some use from the punishment. Still, it hurt to breathe. That was when the call came. Yuuto chose to ignore the call when he saw who it was. However, he figured it had something to do with the council and quickly made a decision. He slowly made his way to the Council Room.

Just before reaching the room, Yuuto ducked into an empty classroom and climbed the walls up to the ceiling. From there, a quick hop into the Void ensured that he could spy on the entire meeting with no one being any the wiser. Thus it was that Yuuto entered around the same time as Vernon, and heard the details. So, Clara was missing, and it seemed the nurse had a plan for a temporary leader. Yuuto watched, crouching closer to the ceiling as the meeting continued. His mission-trained mind were taking in the most important details to report to both Clara and -- Mephisto-dono if necessary. Yuuto remained mostly near the door just in case he ran low enough on Void Energy that he needed to retreat. The events after the tournament had seen his reserves grow, but he still didn't want to risk running out and being seen. He also chose not to risk staying in the tangible world for the risk of someone actually thinking to look up. No, this was safest. He was nearly undetectable in the Void. He doubted even Clara could find him.
In Exiles: A Dimension-hopping, Time-travelling crossover RP. → 12 mos ago Forum: Casual Interest Checks
Seems neat.
In Fate Of The Universe: Chosen Heroes! (Cross Over RP) → 1 yr ago Forum: Casual Interest Checks
You've tickled my curiosity.
In Noble Arms: Restoring Hope - With Gratitude to TheHangedMan. → 1 yr ago Forum: Casual Interest Checks
Seems interesting. Chalk me up as tentative.
In Royal Rumble! → 1 yr ago Forum: Casual Roleplay

Brutus glanced over at Diana as she thrust her weapon at him. As soon as it came into contact with his body, Brutus could feel the electrons start coursing through him. He cut off his Flashfield as he continued to absorb the energy. The electrons (and resulting electricity) thrummed through his body, causing him to start sparking all over. His body practically sang with energy. "Y'all might wanna get outta the way. This ain't gonna be pretty." Brutus stated. He felt... something... something guiding him, telling him how to configure the sheer overload of energy that he was experiencing right now. And it would be dangerous. As soon as his 'allies' were out of the way, Brutus held his hands out. "Alright, here we go! Firing the cannon!"

An explosion of electricity ripped out of Brutus' body, pure and condensed electricty. As a singular mass it lanced out, disintegrating anything unfortunate to be in its path. In all honesty, it looked like some sort of beam attack from those foreign cartoons he'd watched as a kid. Brutus panted as the energy finally stopped flowing after a few seconds. He was sure that if he'd tried to pull that off without the girl's help, he would've been completely wiped. As it was, he felt like he'd just run a marathon with his electricty enhancement turned on the entire time. He turned to Diana.

"Thanks for that boost." He held a hand out to her, trying to keep his eyes on hers, instead of her rather scandalous appearance. "Name's Brutus."
In Royal Rumble! → 1 yr ago Forum: Casual Roleplay